In history The Borgias, a family originally from Valencia, have been accused of many different crimes. They include adultery, simony, theft, rape, bribery, incest, poison and murder for which they were condemned, mostly by their enemies.

They were the Italian prelates and barons that their leader Rodrigo Borgia rendered powerless on his way to becoming the Pope at Rome. Utterly devoted to his family, shrewd and brilliant at foiling his enemies, Rodrigo also enjoys the company of beautiful women.

This sensational Showtime television series, now in its third season, certainly has it all; a brilliant script, great acting, fabulous locations, sumptuous music, lots of love and ambition, as well as absolutely incredible costumes and characters. If you don’t want us to spoil this deliciously decadent saga about history’s most infamous crime family for you then don’t read on.

The Borgia family code was to take no prisoners. In Series 1 Rodrigo Borgia became Pope Alexander VI (1431-1503) so that he could defend the papacy and set about ‘interpreting the silence of God’.

Reveling in this his pomp and circumstance role of a lifetime, English Oscar winning actor Jeremy Irons has gained an empathy with the man whose reputation has grown larger in the centuries since he died. In Episode 1 Pope Alexander noted that ‘vengeance is ours’, meaning the members of his highly dysfunctional dynastic family who live near to him at Rome. 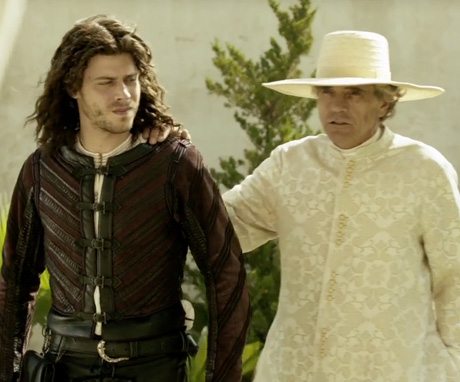 In Season 2 the Borgias came ‘back with a vengeance’, grabbing our attention and admiration once again. With cleverly crafted episodes they hooked all those who wanted to journey with them through one of history’s most intriguing, inspiring and completely infamous periods, the colourful and sensational Italian Renaissance.

The Pope’s son the very complex Cesare Borgia – Duke de Valentinois (1475-1507) is played by French actor Francois Arnaud. He cemented his role in the first two series as a new age heart throb.

He is brilliantly convincing as Cesare, who is having his own epiphany on the road to fame, power and glory.

He begins his rise as a youthful young man, apologizing for his misdeeds and wanting to just protect his mother and siblings.

Over time, embroiled in many political and personal scandals, he gradually becomes the main powerbroker for his family. Famous for his amorous liaisons, magnificent clothes and meticulous observance of his ecclesiastical duties as a Cardinal at the Vatican, a position imposed on him by his father. What he really wants is to be head of the Papal army, but that role had been given to his brother Juan, his father’s favourite. At Cesare’s side at all times is the condottiero Micheletto Corella, who as his friend since youth acknowledges Cesare as his master and helps him keep his family safe from harm in dangerous and uncertain times.

Cold and without any displays of compassion, Michelotto goes about his business with an intense ferocity that professionally makes him a seemingly invincible power to be reckoned with. Personally we discover that he is tormented by his homosexuality, an orientation that did not have any place within the male dominated society of their time. 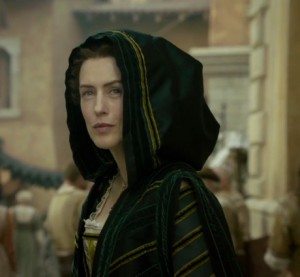 Michelotto defends his master no matter what the cost, or who it is that pays the price. This includes helping Cesare gather the information he needs to take action and violently end his own brother Juan’s life.

This happens following Juan’s dramatic derelection of duties during military action against their dreaded enemy in the north Catherina Sforza (Gina McKee). She is a powerful Renaissance woman, head of another famous family faction. She believes the papacy belongs to them as a birthright. Well known for her military prowess she defeats the papal army as Juan runs away.

We learn that she will also stop at nothing in her desire to bring The Borgias down. Weakness and cowardice was not a state Cesare could tolerate from his brother because his actions threatened to continue to wreak havoc on the family.

Hearing about the death of the ‘derelict’ son he was devoted to nearly unhinges the Pope, who wants his killer vehemently tracked down. That is until he finds out it was at Cesare’s hands. 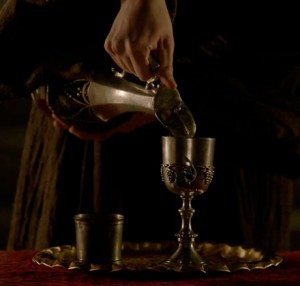 Confessing all to his father in the finale of season two Cesare is forced to wait while the holy father comes to terms with what has happened and considers forgiveness.

Summoned to see him, they are both served a chalice of wine, ironically representing the ‘sacrificial’ blood of Christ.

Rodrigo still in disarray drinks deeply, and hurriedly. Just as suddenly he collapses, fortunately before Cesare can take a sip of his wine. The Pope has been poisoned by a young monk, a zealot whose commitment to his cause is unshakable. 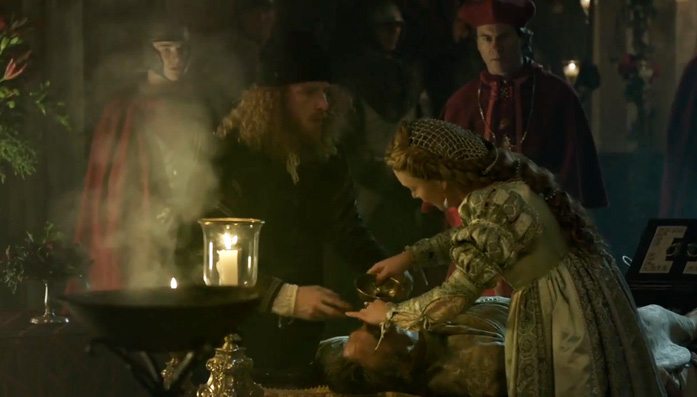 Now in the opening scene of the first episode of season three we find the Pope being saved by his infamous daughter Lucrezia, whose knowledge of poison is vast.

Appropriately she also knows all about antidotes as well.

With lightening quick thinking she saves her father the Pope from certain death by shoving wet charcoal down his throat, thereby ensuring that their close-knit family will live on to fight another day. 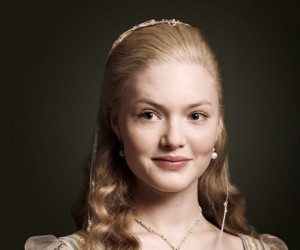 Lucrezia, played by the very beautiful English actress Holliday Grainger, is revealing her talents as a new suitor, the Neapolitan Alfonso of Aragon an illegitimate son of Alfonso II King of Naples, seeks her hand in marriage.

Lucrezia was 18 and Alfonso of Aragon 17 at the time.

Her first husband Giovanni Sforza, surely the Duke from hell, was duly dispatched by her father who ordered her disastrous first marriage annulled when it was no longer politically convenient due to non-consummation.

Lucrezia however had brought forth a male child named Giovanni, rumoured to be fathered by a beautiful stableboy in her husband’s household. 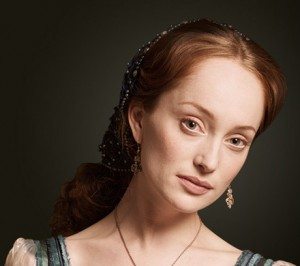 Although no real documents in history support the claim, in the series the character became a liability and was permanently dispatched.

The Pope as the head of Rome’s most unholy family has an incredibly beautiful mistress Giulia Farnese aka Lotte Verbeek, who proved captivating in series one and two.

She is still around, helping Lucrezia to save her saviour although like a lovely flower she’s fading fast. The ‘bride of Christ’ it seems may have started to outlive her usefulness. Coming back into contention is the Pope’s first and favourite mistress, Vannozza dei Cattanei aka English actress Joanne Whalley. She bore Rodrigo the infamous four children he loves and openly acknowledges as his own; Cesare, Lucrezia, Juan and Jofré.

There were many other children that in real life he also fathered and interestingly, Rodrigo Boriga and his offspring are in reality ancestors of virtually all the royal houses of Europe

A down to earth lady, Vannozza knows only too well what side her bread is buttered on. She has proved herself to be very clever by never making demands of this man she earnestly loves and owes allegiance to.

Through her patience and wisdom she has managed to retain her position as an important aspect of the Pope’s family, despite advancing years.

Her presence becomes a comfort to him as his enemies come at him from all sides. 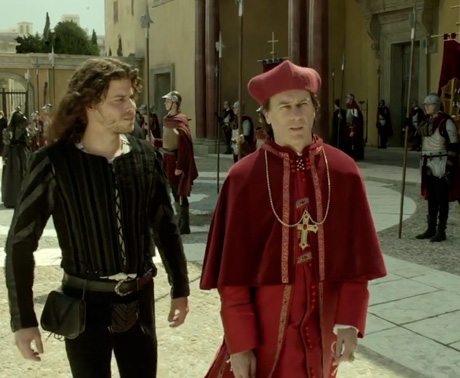 But does this, the series pontificates, include his son Cesare?

What of Cardinal Ascanio Sforza aka Peter Sullivan?

He is Catherina’s cousin and a cardinal so he might just proved to be part of the solution, depending on which side he chooses to take.

And it shifts often.

This show is certainly inspiring a great deal of creativity in other spheres of the arts and fashion worlds with its high drama and wonderful attention to detail in both costume and settings. The writing and acting achievements of the ensemble case are quite simply awesome.

The first episode of series three is packed with murder and mayhem, as Cesare sets about finding who was responsible for poisoning his father, tracing the source back to the Sforza’s camp. Thwarting their plot to kill the entire Borgia clan by forming a pact with their mutual enemies is the ever silent Micheletto, who seems to be everywhere and, all at once. Pope Alexander also has to fend off a knife wielding cardinal, who attempts to assassinate him during confession. He’s left defending his own honour, no doubt hoping that tomorrow will be a brighter day. In reality Alexander VI was renowned for his extensive ability to negotiate solutions, rather than go to war. However this does not sit so well with Cesare, who is busy plotting his own path to power and raising an army of his own.

Believing there is no heaven or hell, he realizes that if he wants the world to change so that he can take control and command, then he is the one who must take charge and change it. That should mean that the episodes ahead will be lively.

In this Series 3 of The Borgias, Pope Alexander is clinging on to power, seeking to enact his own ‘elegant revenge’ against those who want to bring him down. His daughter Lucrezia remains the main pawn in the complicated political games both her father and brother play. The intimacy and sexual tension that has been growing slowly between Lucrezia and Cesare finally erupts in episode three. There are very few people in their world that either can really trust and so trusting each other becomes the most important aspect of their lives. How else can they hope to keep each other and their own family safe?

Brace yourself, will the boundaries surrounding their intimacy finally be crossed?

Is it only a Borgia who can truly love a Borgia?

Watch a Trailer of Season 3 – The Borgia