Star above Star a modern variety of the Camellia is a truly beautiful flower, with a soft pink gentle flush around the edges of a rich creamy white flower.

The stamens are profuse, golden yellow like the sun while its leaves are green, glossy. As a plus its growth habit is completely charming.

Star Above Star flowers do not shatter easily. It is excellent for hedging, as a specimen tree in the ground or, in a pot. It has upright medium growth with strong foliage and flowers from mid April until September down under.

Importantly, it can withstand morning sun in winter, unlike most of this amazing plant’s many other varieties that thrive in cooler districts of Australia.

Australians have been among the leading world breeders of all-new cultivars of the Camellia like this one, which is my favourite. Tough and non invasive, it truly lights up any garden its planted in. Swedish Naturalist Carl von Linne or, Carolus Linnaeus (1707-1778) was the founder of the modern scientific nomenclature for plants and animals.

His ideas on classification have influenced generations of biologists since including those opposed to the philosophical and theological roots of his work.

He established the name Camellia in the system he devised for classifying all plants in the west.

His Systema Naturae of 1735 was where Moravian Jesuit botanist George Joseph Kamel, or Camellus, name was recorded. In the Yunnan area of China the Camellia is a floral emblem of the province holding the same place in the hearts of its people, just like the kumquat and peach fruits do in other parts of China.

It blooms at the time of the lunar New Year (February/March) and is exchanged as a New Year’s gift, symbolising prosperity and long life.

The genus Camellia is not mentioned in ancient history, although its leaves infused with hot water was a drink for perhaps at least two thousand years before the western discovery of China and Japan.

Holland was politically affiliated with Portugal when tea arrived in Europe and Queen Elizabeth 1 in England still had a few more years to live while Dutch painter Rembrandt von Rijn 1606 – 1669, was only 6 years old. Bohea was a black tea and the choicest grade until the turn of the eighteenth century. This is when Hyson, which translates to “Flourishing Spring”, became the luxury tea.

Green tea is made from steamed and dried leaves of the Camellia sinensis plant, a shrub native to the mountainous regions of Asia.

Black tea is also made from this plant,  but unlike green tea, it is made from leaves that have been dried and fermented.

Tea mania swept England, as it had earlier in France and Holland.

Hyson was so highly favoured during the 18th century the British Tea Tax was levied at a higher rate for it than any other variety.

The first shipment of tea reached London via the East India Company, which Queen Elizabeth 1 had founded. Camellias, the International Camellia Society tells us were named for Georg Josef Kamel (or Camellus), a Moravian (Czech) Jesuit priest and botanist, who worked in the Far East.

The first living Camellia Japonica plant did not arrive at London aboard a company ship until the very earliest years of the eighteenth century.

The first C. Japonica was produced by 1739 in the glasshouses of enthusiastic amateur Lord Petre at Thorndon Hall, Essex in England.

By 1760 a plant of C. Sasanqua was flourishing in the royal gardens of the King of Naples at Caserta, and by the early nineteenth century camellia lore had become well established.

‘Just as the dawn is the harbinger of morning, and the sun does not at once reach his meridian glory, so the camellias advance upon us by degrees in beauty. We cannot but view, with admiration, the diversity and elegance of this beautiful family of plants, which the all wise and bountiful hand of God seems to have formed for the delight of mankind’ Proud Group of Chinese and a Camellia Tree in a Temple

In China the camellia as a decorative plant was celebrated widely in its art forms, but mostly from the Ming Dynasty (1368 – 1644) onward.

While the camellia plays no part in written ancient Japanese history its influence is felt strongly both in legend and tradition.

The Grand Shrine of the creator-goddess Amaterasu Omikami (ancestress of the present Imperial family) is located deep in a wood of camellia trees.

The Japanese borrowed a great deal from the Chinese, like the Romans did from the Greeks. They have a cultural custom of sweeping out bad spirits at New Year.

In China they use a traditional branch of flowering peach to perform this ceremony. In Japan they substituted a flowering branch of camellia.

And, camellias were also used in many other ways in ritual court ceremonials. By the 1830’s the fame of this quite beautiful flower had spread. Not only all over England, but onto the continent where it became popular in countries such as Spain, Portugal, southern France and Italy.

At Chatsworth House at Derbyshire in England in 1840 gardener Joseph Paxton planted two specimens in a great glass case where they still bloom today. 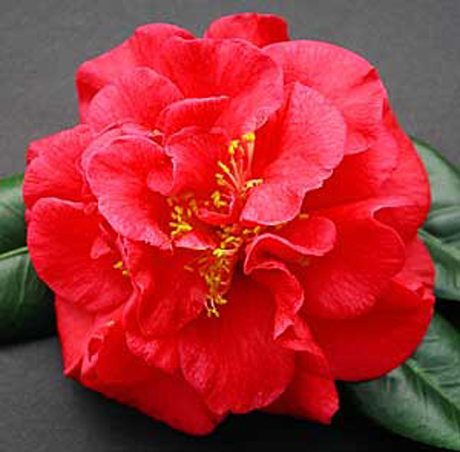 During the Victorian age in England, and its colonies, the camellia began to be associated with the age of formal elegance. Its cool serene beauty was very much in tune with the studied pose of a nineteenth century dandy and fashionable debutante.

The novel by Alexandre Dumas La Dame aux Camelias of 1848 also created a scandal. So that brought the flower to popular notice.

Then when he made it popular as an opera by Verdi called La Traviata camellia madness reigned until around 1870 in England when quite suddenly it fell from favour nearly forgotten until following WWI.

The arrival in Australia of the first camellia was heralded in engaging terms in a letter from John Macarthur Junior at London when he was writing to his sister Elizabeth.

She was outback in New South Wales where her brothers James and William were administering the estate of Camden Park.

‘I wish’ Elizabeth said in correspondence ‘to convey to you the Camellia Japonica the most magnificent flowering shrub…ever been introduced to this country. The flower, which is red as the rose or white as driven snow, is the most perfectly beautiful that can be imagined’. The plants arrived from England in February 1831. They still flower today at Camden Park House, which became the first great source for propagating camellias in Australia.

Similar to Huntington Botanical Gardens in America where many camellias grow. Camellias are quite simply spectacular when in bloom.

They were prized in Japanese gardens from the 14th century. And, in the gardens of Kyoto temples there are many ancient trees estimated to be about 400 years old.

Camellias are mentioned in 17th century books about how to arrange flowers. And, while known to botanists during the early eighteenth century, they were not generally seen in the west until 1869 when they were imported by Dutch traders. 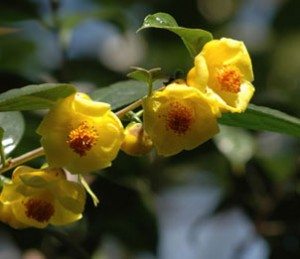 In Australia, northern California and southern states of the USA camellias are a huge success in areas that resemble its natural habitat. In Australia durinCameg the 20th century artist Paul Jones recorded the Camellia Chrysantha, a gold camellia from Guanxi province in China.

This sensation of the camellia world grows from 2 to 5 metres in height with dark green quilted leaves, with flowers that bloom throughout winter a pure and golden yellow. The history of camellias in Australia  however is more aligned with Professor E.G. Waterhouse (1881-1977) a linguist by profession, who became one of the world’s foremost authorities on the camellia.

He raised and named many popular varieties.

He founded Sydney’s famous Camellia Grove Nursery in the suburb of St Ives (It has moved since).

President also of the International Camellia Society Professor Waterhouse wrote a history of the flower in Australasia in Two Volumes, 1. Camellia Quest and 2. The Magic of Camellias, both of which have since become collector’s items.

Named and propagated by him many camellias went on to world popularity and forever will be associated with his name.

At ‘Eryldene’ his now famous house at Gordon in Sydney, he raised hundreds of seedlings, achieving great success. The house was designed by visionary architect William Hardy Wilson and is listed on the National Estate and New South Wales Heritage Register. It was nearby to a very glamorous house that my own family owned for a number of years at Killara in Sydney. It had a unique round bay window on the ground floor with custom made curved panes of glass, the owner being head of one of Australia’s biggest glass manufacturers in the 1920’s.

In its garden the original owner had planted some fifty six varieties of camellia trees, with advice from Professor Waterhouse who was a friend. The camellias and their companion plants complimented the house well.

It was a Hollywood style design from the 20’s, or in what we now call the Art Deco style. It had been designed by renowned English born Sydney architectural firm of Joseland Gilling, aka Richard George Howard Joseland and Glynn Gilling, who had both migrated to Australia and lived on the upper north shore of Sydney where many of their houses were built.

Underlaying the Camellias were countless varieties of azaleas. Hanging over them was a canopy of exotic deciduous trees, which the rosellas in particular, loved. I did everything I could while I was there to influence the National Trust of Australia to classify both the house and garden as a unique Australian house of its period. The fact that it had so many of Waterhouse’s camellias in it as well should have galvanised them into action.

Even the gutters surrounding the house had been finished with the sandstone used in the garden’s rockery walls.

At the time however, the National Rust as they were christened, were very short sighted, only interested if a house was over 100 years old.

In China Camellia petals represent young women and its calyx young men, and because the calyx falls from the camellia plant with the petals when the flower expires, the camellia is said to represent the undying love between a man and a woman.

Camellias then finally, represent both love and devotion and are given as a gift of affection. When I was there I planted a Star on Star to aid the garden’s growth. Historically a white magnolia tree had been planted in front of the round bay window and the balcony above it, which led to the main bedroom. It was a mature wonderful tree and as white magnolias are like camellias symbolic of love, you can understand why I was passionate about it as well.

Sadly the new owner chopped it down, which was a huge disappointment for such a stunning original period garden.

During our time there we always kept a variety of Camellias from the garden in a large stone float bowl at the front door, providing a wonderful welcome for our friends and visitors, adding to what was already a very romantic ambiance.

Sully, a film directed by Clint Eastwood stars Tom Hanks and Aaron Lockhart, relates how the Captain of flight 1549 landed on the Hudson River saving 155 people