All that glitters is represented by London’s famed Cheapside Hoard, an unbelievably choice collection of unique and quite stunning 16th and 17th century Elizabethan and Stuart period gems and jewellery. It lay hidden for centuries, buried in the rubble of ancient London, ensuring that the cache became the stuff of legends.

A watch, set into a single large Colombian emerald crystal of hexagonal form with a hinged lid dates from 1576 – 1600 and is one of the highlights of the collection. The movement and the dial plate have sadly corroded and so it cannot be raised out of its setting to see if any signature would identify the maker. At this point the decision has been made to leave the jewel intact for posterity.

The so-called Cheapside Hoard was unearthed along with some 500 other items in Cheapside, London in 1912, by a group of unsuspecting workers demolishing a building. One can only imagine their surprise and delight at thinking how rich they had all just become. When they found out, all of London would be excited too.

The hoard was speculated to have been part of a former goldsmith-jeweller’s stock, which may or may not have been stolen and stashed and the thieves caught, so it was never claimed? Perhaps it had been buried while the English Civil War raged on or, at the latest as the curator suggests, when the Great Fire of London engulfed so much of London? The workers sold some of the items they had found to an antiques dealer and pawnshop owner George Fabian Lawrence. He was well known about town for paying cash for items ‘off the books’.

In hindsight this was a great piece of luck, although it wasn’t thought so at the time. Officials of local institutions were horrified; however in reality he did ensure they survived for future generations to enjoy and learn from.

Lawrence had been appointed by the Guildhall Museum to seek out new items for its collection. There were not as many restrictions at that time on what happened to treasures found under the ground. Especially in the well worn streets of London. No one would have been expecting to find a stash of jewellery from Elizabethan and Jacobean times buried under a house built later.

It was a case of finders keepers losers will weep, which is so very different to now with detailed laws to protect cultural artifacts.

Lawrence had also been appointed in 1911, the year before the find, Inspector of Excavations for the developing institution that would become the Museum of London. They requested that one of their generous patrons Lewis Lewis Vernon Harcourt, 1st Viscount Harcourt should purchase most of the Cheapside Hoard on their behalf.

A few pieces went to the British Museum and the Victoria and Albert Museum purchased one gold and enamel chain.

Reunited now for the first time in a century, The Cheapside Hoard: London’s Lost Jewels will go on show at Museum of London from October 11 until April 27, 2014, curated by Hazel Forsyth.

The museum has pulled out all the stops in terms of creative talent to ensure the collection will dazzle London and its visitors with its brilliance. The curator believes that she may have also unravelled the mystery of whom it belonged to when it was hidden from view. Selection of artifacts found in the Cheapside Hoard, courtesy Museum of London

She has found evidence the ‘hoard’ might ‘have belonged to Thomas Sympson, a superficially respectable jeweller’ with a lucrative sideline in counterfeiting.

It may have been buried sometime during the Commonwealth period (1649 – 1660) when England was undergoing its own revolution of change and ‘top people’ were busy beheading King Charles 1 and embracing ideas of puritanical restraint under the leadership of the religious zealot Oliver Cromwell (1599-1658). Cheapside was at the centre of commercial life in London at the time and while many people speculate on the story of how the jewels became buried in the premises of a Jacobean goldsmith no one really knows how it came to pass.

One richly decorated bottle was designed to contain perfume made from flower distillations and spices which were widely used to disguise unpleasant odours. One of Shakespeare’s sonnets refers to a bottle of this type and filled with ‘sumer’s distillation left.

The most important clue for Ms. Forsyth and her assessment of the situation is a small red seal. It had been more or less overlooked since 1912 because it failed to dazzle. Everyone was so blinded by gems that sparkle.

Made of Cornelian, a material the Romans made jewellery from, it bears a picture of a swan standing on a wreath, which was topped with a nine-pointed crown.

She deduced ‘it was the heraldic badge of the Viscount of Stafford, a short-lived peerage created for William Howard in 1640. The title died with Howard when he was executed for treason in 1680.

She also believes ‘the latest date the hoard could have been buried is 1666 – when the Great Fire of London engulfed the houses and laid down a layer of charred rubble on top of the jewels. Selection of Gems found in the Cheapside Hoard, Courtesy Museum of London

However it will perhaps always be and remain a wonderful mystery.

From the middle of the sixteenth and well into the seventeenth century in Europe and England, expansion of trade and industry led to a period where the wearing of costume was influenced more by currents in art and intellectual thought than by any other factors.

The hoard contains an array of precious and semi-precious gems from many parts of the world, which provides evidence of the etensive trade networks that existed following the European global conquest, which happened in the Elizabethan and Jacobean period.

Fashionable ideas now caught on quickly, a fact scholars confirm through studying trends across Europe at this time, particularly among those who cared or those described as ‘top people’.

Their ideas percolated down through the social strata slowly, the process taking years, and indeed in some cases decades.

‘Top people’ were usually educated and subsequently, at this stage of history, kept documented evidence of their frequent changing of arrangements for both their person and their possessions.

Hat ornament, in the form of a Salamander, 16th - 17th century, The Cheapside Hoard, courtesy Museum of London

A superb Salamander found in the hoard is an example of a ‘device’, which was used symbolically on architecture, furniture, in interiors, and jewellery pinned on clothing.

Devices were adopted as a reaction to life in general, in a world that had more than a fondness for allegory. Their use led to a delight in anything ingenious or unusual even if it had no secret meaning.

One example of a device would be a cupid firing arrows at a unicorn, signifying chastity under attack by sexual desire. They were also fashioned into badges (enseigne) usually worn on the hat of a gentleman of prominence, power and influence. Made of gold and jewels, their design was mainly allegorical, often accompanied by an explanatory motto.

Artists rendering them in many mediums chose the better-known mythology of the ancient world and as a result, their works were rich in amatory illusion.

The intent of any device was to teach an intuitive form of moral truth.

The real charm lay in the fact it was only those who could read their visual message that knew their real significance.

If you particularly want to understand jewellery design of this period you need to be well versed in your mythology and legend.

The Salamander, with its lizard like appearance, became associated with an ardent lover when it was the emblem of Francois 1 King of France until 1547 whose court rivaled that of King Henry VIII in England, Elizabeth 1’s father. During the reign of Queen Elizabeth 1 the ring was worn to represent as it had for centuries, the enduring qualities of true love.

Young gentleman languished about and took great care over their costume, which include ‘love jewellery’.

Jewellery was largely devoted to newly discovered materials and this is a period where diamonds appeared and bows become a central theme, interpreted as a true lovers’ knot. 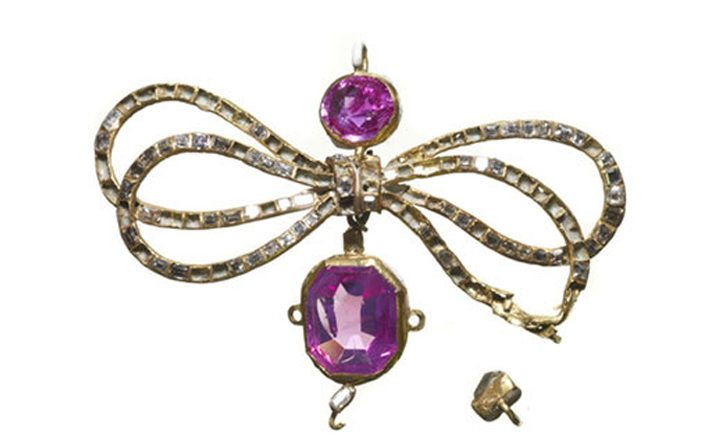 In their noblest form these were diamond set and worn in threes, graduated to follow the line of the bodice. The bow became an essential adjunct to 17th century clothing.

It was an emblem of love, when Aphrodisian themes preoccupied many an artist and craftsman who devoted his attention to them.

Three jewelled bows dating from 1600 were found as part of the Cheapside Hoard.

During the period encompassed by the Cheapside find, physical beauty was sustained by a love for luxurious materials. Rich heavy stuffs, thick embroideries and fragile lace, all formed a perfect backdrop for showcasing beautiful jewellery, such as the many pieces found in this fabulous hoard.

Visitors to London, this looks like a splendid show for the diary.