Netflix The Crown Series 1 Episodes 6, 7 & 8 is dealing with Margaret’s sad matters, which come to the fore when reporters observe her picking fluff of Peter Townsend’s jacket. Reporters are onto them both… it is an intimate gesture… one that will have repercussions.

As a child I remember the distress and dismay that surrounded the House of Windsor as the monarchy struggled to deal with the decisions surrounding Princess Margaret and her love life. It often seemed to dwarf in the public’s mind, so many other important affairs of state.

On reflection it is a point in history that contributed to my generation living through the awakening Age of Feelings.

Post two World Wars many people who had learned how to put them on hold in order to deal with the tragedy occurring daily in their lives on a global scale, were forced to confront them once more by a new generation. “Can we have dinner before I go to Rhodesia?” Margaret asks her sister The Queen and continues “I would like to bring Peter… and have dinner with you and Phillip… Thursday evening. “Oh”, says the Queen, sensing that the conversation will be ominous.

But it’s momentary as she has worries of her own. Phillip is increasingly out every night with his male friends, often coming home very much worse for wear.

The Queen and Phillip dress up to go to dinner with Margaret and Peter. And she tells her sister… “ We have been thinking of what kind of future we may have today…. we want to marry, one day in the future”.

“Do I have your permission” Princess Margaret asks Elizabeth… you are sovereign.

Elizabeth hadn’t realised she had to approve, but reacts and says “… that if it is what you desire more than anything in the world, I won’t oppose it”. Phillip congratulates them both and Margaret is ecstatic. “It will be an enormous scandal” says Phillip to the Queen on their way home… “It puts you in an awkward position with him being divorced, although it wasn’t his fault”.

She is the one who comments “His wife had an affair with another man. I respect him for what he did in the war he’s a good pilot”, clearly she likes Townsend.

“If he were a good influence he would pack things up with Margaret now and get back with his wife” Phillip replies.

Suddenly it is in the headlines, It is gelignite…It breaks the rules… and if we don’t write the story someone else will says the owner of the newspaper who has come to tell courtier Tommy Lascelles that one of his reporters is onto the story.

Margaret is partying with her friends when Tommy goes to tell the Queen Mother who retains his allegiance. “Should we deny it” she asks, “…this horse has bolted”, he tells her and plans to see the Queen. Scandal could destroy the monarchy, the Queen is told. The Royal Marriages Act of George III decrees until 25 years of age any member of the royal family must secure the sovereign’s permission to marry.

If Margaret waits until after she is 25 it will protect your relationship with church and state. Royal Romance puts Monarchy at Risk is the Headline.

She’s taking him to Northern Ireland with her on a visit. I hope it wasn’t a mistake bringing the Group Captain along. Sending him away would break my sister’s heart she tells Tommy, whose reply is “ Hearts mend” he replies. Margaret rides out to meet Peter Townsend… who after the trip is being posted to Brussels as attaché at the Embassy, everyone surrounding the Queen hoping the separation will break the couple up.

Such an act of shipping me out may go against you in the popularity of the people he says. Bon Voyage. They want him gone before Margaret who has gone on an official visit with Elizabeth the Queen Mother to Rhodesia, comes home.

There is no one at the airport to see him off and Margaret learns he is gone via a telegram. Ringing the Queen she accuses her of being against her from the ‘beginning’ “… you reap what you sew – sister”.

The Royal family are accused of cruelty and Phillip just wanting to not be involved, leaves for a weekend away with the fellows from his lunch club. 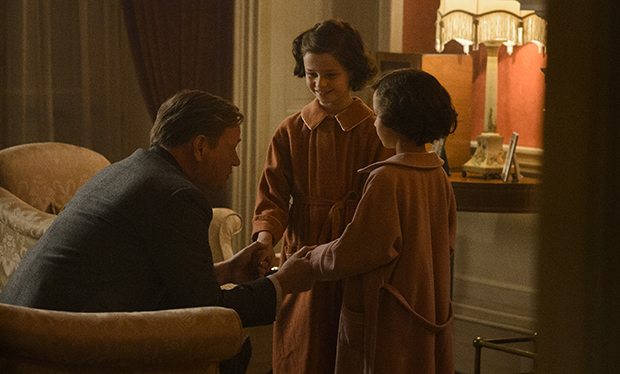 She is now going to Eton College on a regular basis for private tutoring about the British Constitution and she learns the difference betwee the dignified and the efficient… the dignified is the monarch, the efficient has the power to make and execute policy – of the people, which only works when they support each other and trust one another.

She also discovers that she is not learning what other children learn, including mathematics, which the master tells her for her to learn is ‘undignified’… meaning as a lady she doesn’t need to know it.

In the main men of Elizabeth’s time, and indeed my own, filtered what they believed the women in their life needed to know.

Back in the present day when she is constantly being stumped by questions about the economy as she doesn’t understand math she angrily questions her mother about failing in her parental responsibility, but it falls on deaf ears.

You were taught to be a lady… a Queen she answers but Elizabeth persists “How could you have let me down”…I educated you as far as I thought fit…says her mother “…we all have to accept our limitations in life. She now has a set to with Tommy, who is retiring and they have a royal battle over her getting the secretary of her choice rather than the next ‘inline’. There is a way of doing things here an order; and individuality is not to be encouraged he informs her, it is in the small things that the rot starts.

He’s insisting her thoughts should be respected for the future but she cannot win. He moves briskly on to discussing with her why Sir Anthony Eden has to go Washington. It seems Mr Churchill is not well enough, he has had a stroke…he’s in bed.

She’s worried the country is in the hands of unhealthy men and her fears are well founded. Sir Anthony has a turn on the plane due to his gall bladder requiring an operation, which he chooses to have in Boston as they are leaders in the field. So she is asked to invite President Eisenhower to London.

She wants to engage a tutor… one who is not to stuffy, one with a sense of humour and soon Professor Hogg arrives. Elizabeth is tired of how she’s treated, she wants to make at least one decision for herself and asks him “Would you help me to hold my own, by filling in some of the gaps in my education”.

Winston is told Eisenhower is coming and tries to get out of bed and collapses and they concoct a story to tell the Queen… but she still learns the truth and summons his secretary Mr Colville who tells her Lord Salisbury insisted we keep it from you… he said to do nothing and stay silent at all times.

Sharing this with the Professor he questions…”…isn’t it your duty to act… I think you know precisely” says Hogg. “You are in the right and they are in the wrong. This is about integrity and principle it’s not about education. You know the Constitution backwards. Summon them and give them a good dressing down from Nanny, it is what they want in life” he says. She sends for her notebook she wrote as a child about the constitution and Lord Salisbury and Sir Winston in that order.

When Winston arrives she accuses “you all colluded…. It is my job to do”.

She’s asserting her authority at last.

Blue: the Film, a documentary made by advocates for our Oceans, lays the facts out clearly and succinctly in a way we can all understand. Become a guardian now!