Netlix: The Crown, Series 1 Episode 5 starts in 1937 when Princess Elizabeth is a little girl and her father is practicing for his coronation.

He asks her to read the Archbishop’s role as he’s practicing for the big day tomorrow…he wants to respond and explain to her what giving a ‘sacred promise’ means. It’s a promise you can never break. 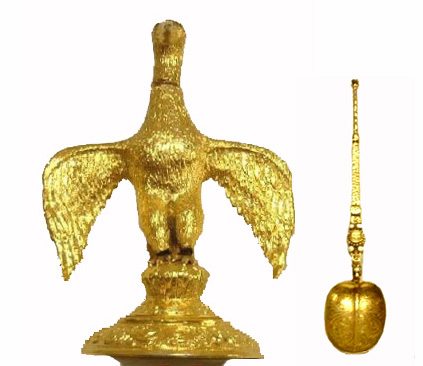 You have to anoint me, he tells her, otherwise I cannot be King.

“It is only when the holy oil touches me… I am transformed and brought into direct contact with the divine”… he tells her.

“I am forever changed… bound to God. It is the most important part of the ceremony”, when the hands, the breast and the head are all anointed with the holy oil.

George VI takes his heir to see The Crown, which weighs 5 pounds and so he has to practice walking with it on.

Switch to 1952 and there she is trying it on too, remembering the ceremony and her father both now integral to the past.

Don’t read any more I you don’t want spoilers.

In England the ‘Sovereign acts as a focus for national identity, unity and pride; giving a sense of stability and continuity. Officially, the sovereign ‘recognises success and excellence; and supports the ideal of voluntary service’.

“It is not as easy as it looks” Elizabeth II says to Prince Charles and Princess Anne, who are watching their mother trying on The Crown with curiosity and interest. “Can I borrow it to practice she asks?” her helper.  “Well, if it is not yours Maam”, … who does it belong to?” is his reply. Elizabeth asks the Duke to head up her committee for the Coronation. “I may need your help Queening” she says. “What would it entail? He asks”, knowing it won’t be easy.

At Westminster Abbey some thirty-eight Coronation ceremonies of reigning monarchs have taken place, with the only joint coronation being William III and Mary II. Edward V, the boy king (one of the “Princes in the Tower”) and Edward VIII, who abdicated in the twentieth century, were never crowned.

The Coronation of a monarch of England is an ancient ceremony in which the church legitimizes the intended King or Queen being brought to monarchy.

All the elements of the coronation service – the procession, the oath or promise, the anointing and investiture are all followed by a mass and this format can be traced historically to the crowning of King Edgar at Bath in A.D. 973 – he was the first King of All England. The Sovereign takes an oath, swearing to govern faithfully with justice and mercy, to uphold the Gospel, and to maintain the doctrine and worship of the Church of England of which they are the titular head.

At the moment of coronation Four Knights of the Garter hold a canopy over the Chair and, concealed from view, the Archbishop anoints the Sovereign with holy oil on the hands, the breast and the head.

This solemn aspect of the coronation service sees the anointing of the monarch who is consecrated for the duties of a Sovereign.

This is when the choir sings the anthem Zadok the Priest, the words of which (from the first Book of Kings) have been sung at every coronation since King Edgar’s in A.D. 973. The setting by Handel has been used since the coronation of George II in 1727.

The sovereign is anointed with holy oil and receives the crown and other royal insignia from the clergy as a sign of honour and dominion. This aspect of the service continues ceremonies that evolved in antiquity when successful warriors were awarded wreaths. To be Chairman of the Committee, the Duke of Edinburgh in 1953 understood that all the men on the committee may have disliked him.

He wouldn’t do it though, unless the Queen gave him total control… over a service dating back 1000 years. So she does, telling him not to ‘go mad’.

The crown used for the coronation of English sovereigns from Edward I to Charles I, except for the boy Edward V, who was never crowned at all, was broken up in 1649 This happened by order of Parliament following the execution of King Charles I and the rule of Cromwell and the Commonwealth (1649-1653).

The new Crown designed for Charles II when he was restored to the English throne in 1660, included the historical crown’s fragments.

In 1953, for the first time, this part of the ceremony ended with the presentation of a Bible, ‘To keep your Majesty ever mindful of the Law and Gospel of God as the rule for the whole life and government of Christian princes’.

Another of the Duke’s changes was to include for the first time a hymn for everyone to sing, ‘All people that on earth do dwell’. The Queen summons the Coronation Committee… to tell them about making the Duke Chairman. It is what I want, she informs them all including the Duke of Norfolk, who with his ancestors, has been in charge of the ceremony for a long time. He is relegated to being Vice-Chair.

Her Uncle Edward, Duke of Windsor is back… he dislikes his ‘smug stinking relations as ever’ he tells his wife Wallis on the phone

The Archbishop of Canterbury wants to meet with him at Lambeth Palace in the morning. It is an ambush… ‘we want you to do the right thing’… regarding what…’the Coronation’.

Your attendance at this sacred ceremony, as a divorced man, is not acceptable he learns. You can come as a royal Duke, but the invitation does not extend to your Duchess.

“It is 17 years since the abdication” he asks, why not use a celebration to change and turn a page…practice tolerance and an ability to forgive” … but the Archbishop does not budge, so Edward digs his heels in and will not attend the Coronation. You auld lang swine… he comments. While this is all going on, Queen Mary, the Queen’s grandmother has died although there is little time for traditional mourning.

Phillip in considering on how the coronation must be different, allowing the people in.

He arrives… and addresses the committee about working with the all the great minds and talents. Britain will be on show on a scale never seen before. It must be a coronation befitting the wind of change she represents is what he wants.

He explains that TV will be allowed to film with great sensitivity and respect for the occasion. Then he brings up the service…., which is sure to cause a rumpus in the church. Needless to say the Prime Minister Winston Churchill gets a ‘full report’ from those who are feeling disaffected.

The PM comes to meet with The Queen… “please tell me this has not anything to do with my husband”. she asks… He’s wanting to change liturgy and text – it is an ancient sacred ceremony, he explains.

What say you she asks him to give his opinion. No Maam he says decisevly, what say you? We all take our lead from you.

She heads off to the Abbey to see what is going on for herself. Phillip tells her he is against a big overblown ceremony as in ancient times while the rest of the country is on rations… he knows first hand what revolution can do, his own family being part of one.

Phillip explains that by broadcasting the service on TV whil will allow people around the world to be involved in and feel part of the occasion. This is about lifting people up as she wanted, so they can feel and share in the joy o such an occasion. One thing she won’t change however, even though he begs her to make an exception, is that as her Consort should kneel before her.

He had wanted to stand beside her so the people would see they supported each other. But, she holds firm – he should kneel before God and The Crown, which is not about her personally. Then it is the great day.

As kings, priests, prophets before her and as Solomon was anointed King by Zadok the Priest, so Elizabeth is consecrated Queen over the people of England and this part of the service is blacked out…. 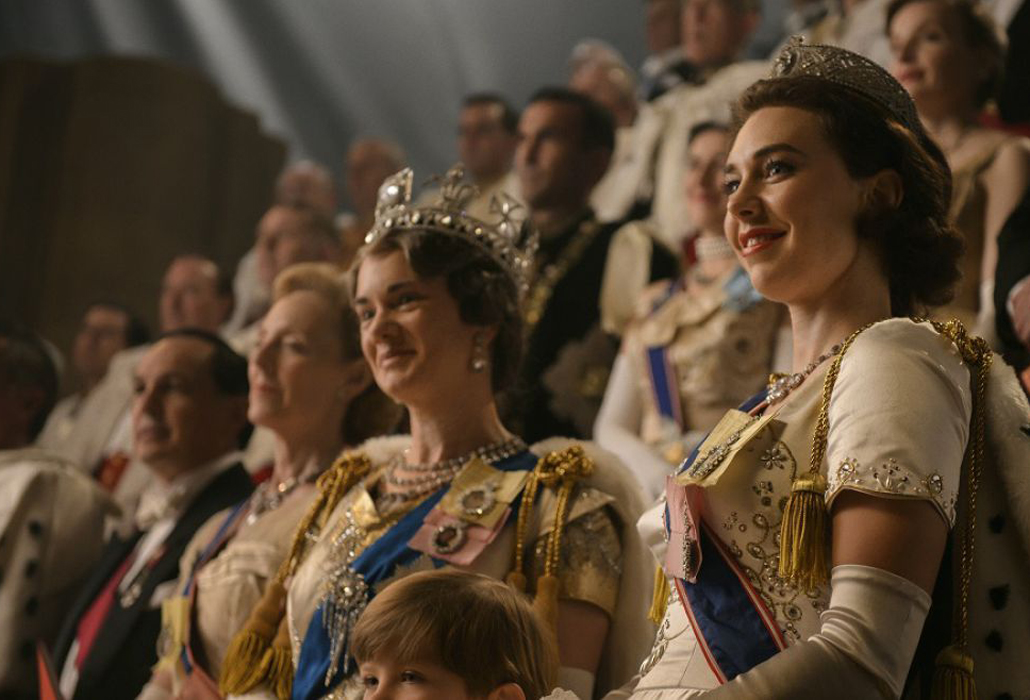 Pull away the veil and what are you left with… hey presto what do you have is a goddess… and as all the other entitled people put their crowns on… and the shout goes up, God Save the Queen Phillip comes to offer his fealty and then she’s leaving the Abbey… this is where original footage is shown. 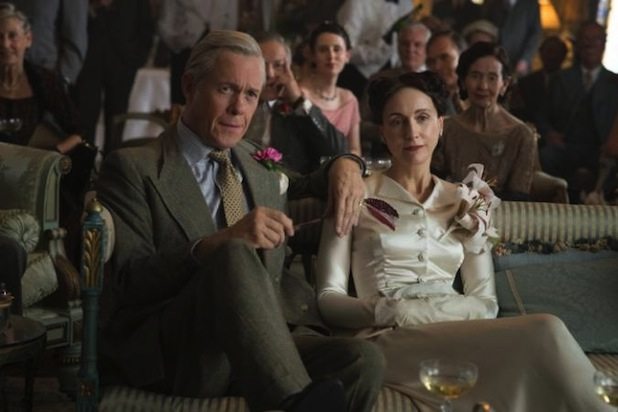 Edward, Duke of Windsor and Mrs Simpson and his friends have watched the ceremony on television in France. As he explains they don’t see the anointing, which is blacked out because ‘we are mortals’.

We do however, we see how she makes her sacred solemn promise, the one she has not broken to this day.

It is a poignant episode and I remember it well, a highlight of my childhood and like all ‘her people’ I felt I had shared in something quite wonderful, a feeling that has never really left me, one that has just deepened in my understanding of its importance over the years. After it is all over in England, over in France Edward is left realizing how his own decision has led to the sense of great loss he’s feeling… despite trying to convince everyone else he did it for love, as we leave him, he’s playing the bagpipes in reflection.