Netflix Original Series: The Crown, Season 2: Episodes 1-3 certainly takes liberties with real historical facts in the name of entertainment, while gathering fans and admirers through the sheer quality and excellence of the production.

This outstanding series offers a deeply personal and searching portrayal of a woman for whom at first the median road and adhering strictly to tradition seems the only way forward. Her ability to change and grow with the times is what perhaps distinguishes her from any other monarch. The writing, direction and production of The Crown is impeccable. The settings, atmosphere and the acting all beautifully imagined and realised as once again, it presents brilliant British actor Claire Foy continuing with her simply awesome performance as England’s youthful Queen Elizabeth II. 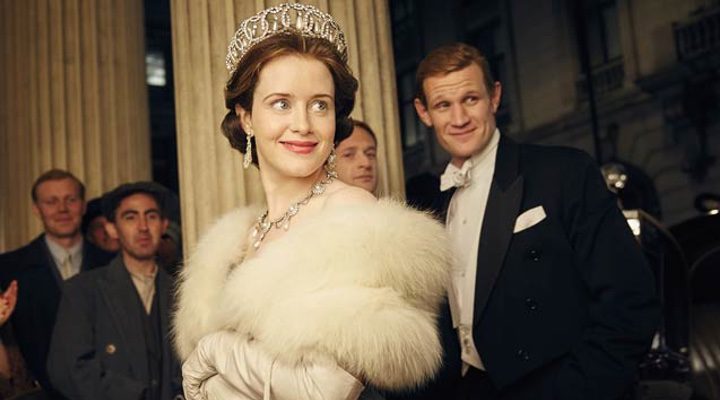 In Season 2 Queen Elizabeth is constantly dealing with the see-sawing emotions surrounding her relationship with her husband Phillip, Duke of Edinburgh, played with great gravitas by Matt Smith, who offers us a sensitive view of the complexity of a man who has always seemed a mystery to many.

Having discovered in his brief case where she was leaving Phillip a surprise gift, a miniature portrait of his latest lover a ballerina of some note, The Queen is inwardly distraught. 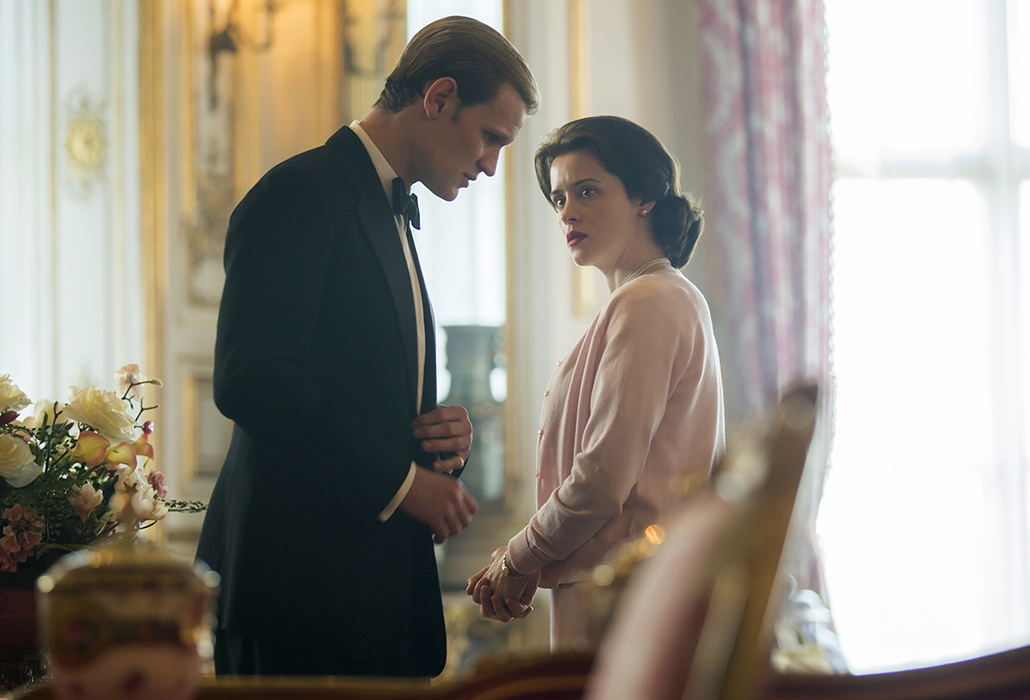 He’s off for a five-month sojourn around the Commonwealth, which includes opening the Olympic Games in Australia in 1956 and wonders why she suddenly blows cold the day before he leaves. Recently their relationship has been on such a warm and happy footing.

After he has sailed and watching her rival for her husband’s affection dance Giselle at a Royal Ballet performance, the range of emotions and despair on the Queen’s face tell a sad tale of what it is like to live your life constantly in the glaring spotlighted judgmental eye of the public, politicians and the press; completely terrifying. 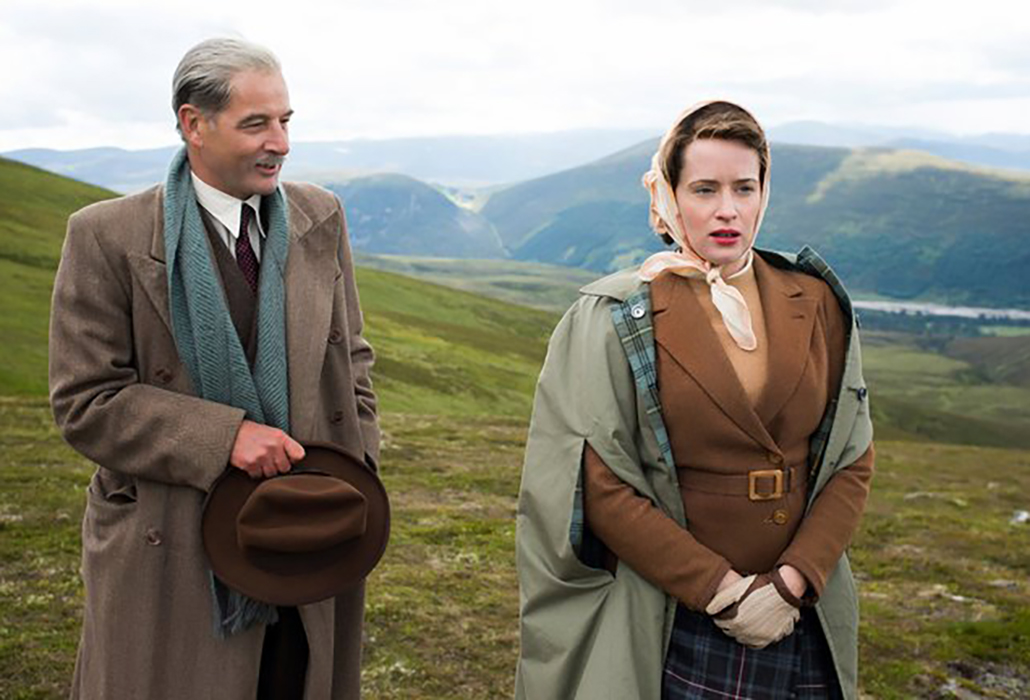 In the first three episodes, we follow Phillip’s travels and back home in London we have the transition from Sir Anthony Eden (Jeremy Northam) to Harold McMillan (Anton Lesser) as PM, including the Suez Canal crisis. It was on July 26, 1956 when Egypt’s President Gamal Abdel Nasser sent troops to take over the pilot’s post of the nationalized canal owned by the Suez Canal Company, which was controlled by French and British interests

When her Prime Minister’s plan to reclaim the port at Suez is all very unsuccessful, having been brought up to always do her duty first, and knowing the full facts of the matter from having seen secret service papers, the Queen is very unsympathetic to Sir Anthony Eden’s news his Dr has ordered him to have a two week rest in a tropical climate. 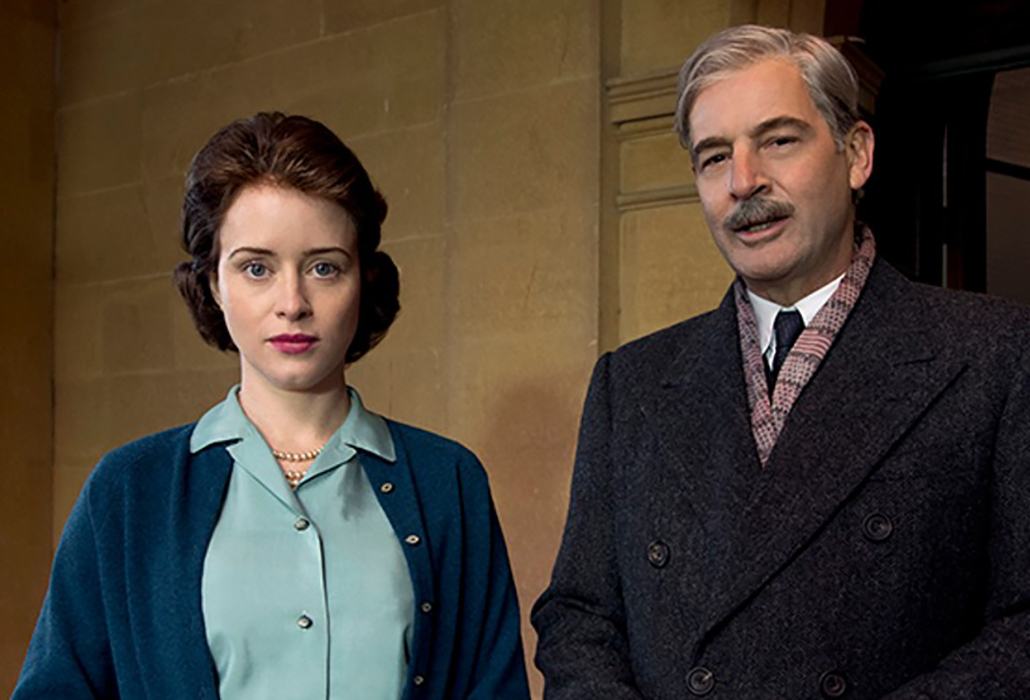 This allows him to leave London in the middle of the crisis as America and the UN censure Britain for their part in the planned invasion of Egypt. The Queen and the government have been humiliated and she is furious at being put in a position where her support for the English PM is taken as a given, despite personally believing the decision to retaliate has been made hastily.

While she is dealing with all this at home The Queen is also hearing news from abroad where for the men aboard the Royal Yacht Britannia have embraced the idea there is no such thing as infidelity. In New Guinea the men on board The Royal Britannia with Philip, most of whom are married, are in their idea of seventh heaven… enjoying adventures in adultery led in part by Phillip’s Private Secretary Lt Commander Michael Parker (Daniel Ings), who has no respect for marriage as an institution or women in general. 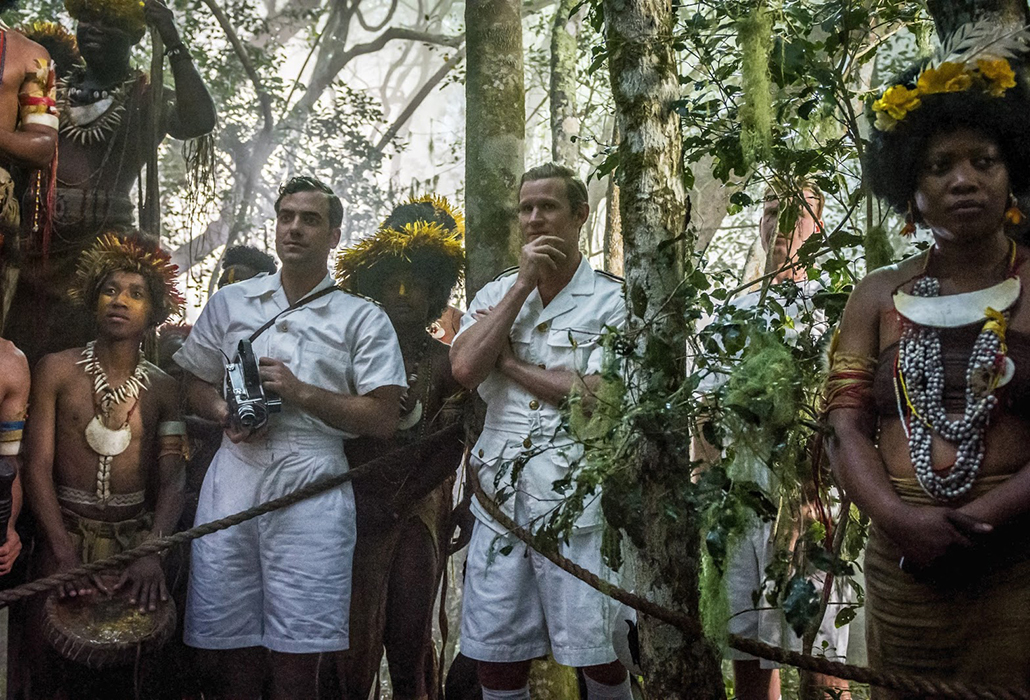 Their adventures on board together, unbeknown to Phillip, are being regularly reported back home… whole sections of Parker’s letters being read out verbatim to members of the Thursday Club, who met for luncheon each week in a private room at Wheeler’s restaurant in Old Compton Street, Soho.

Michael Parker is being indiscreet, and it has become a problem for him back in London where having sought legal advice, his wife Eileen Parker’s actions have reverberated up the chain of command to the Queen’s Press Secretary. Mrs Eileen Parker (Chloe Pirrie) is cautioned not to divorce her husband as her husband’s close relationship with The Crown also puts it under threat. 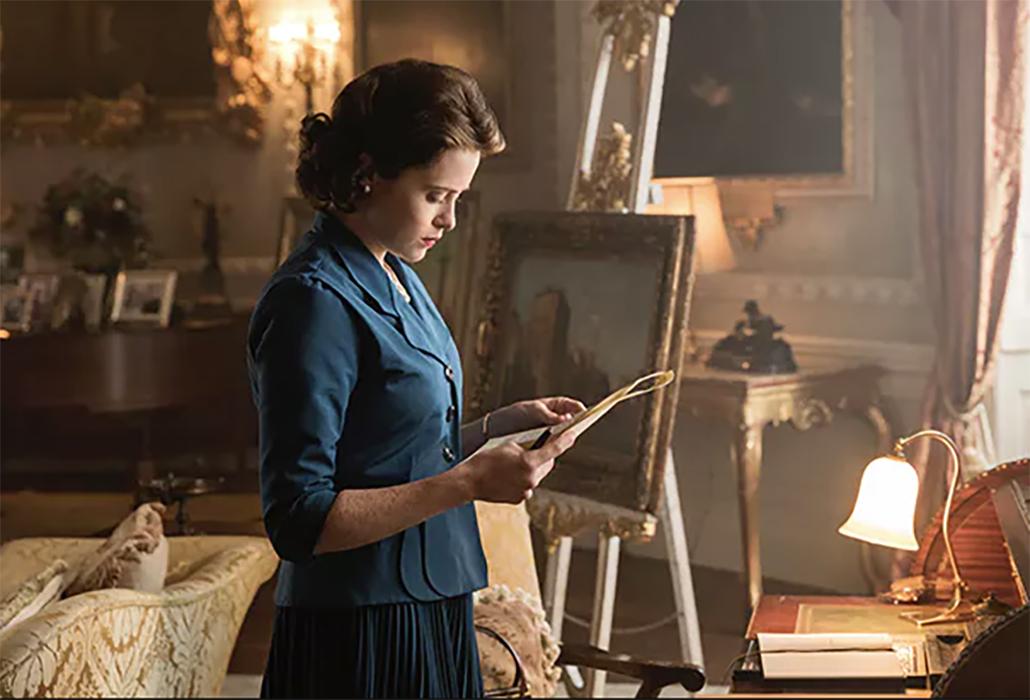 Determined, she seeks evidence to prove her husband’s betrayal and obtains a copy of a letter he’s written home to the Lunch Club about their ‘whoring’ in every port. She shows it to the Queen who comes to offer her help in the name of the friendship their families enjoyed when they were together in Gibraltar, but is rejected.

Mrs Parker is also approached at her son’s sports match by Tommie Lascelles (Pip Torrens) the Queen’s former Private Secretary and is completely incensed by his proposal she holds off on her divorce for the moment. Furious she promises he will see it in The Times at her convenience, not at the whim of the government or The Crown. 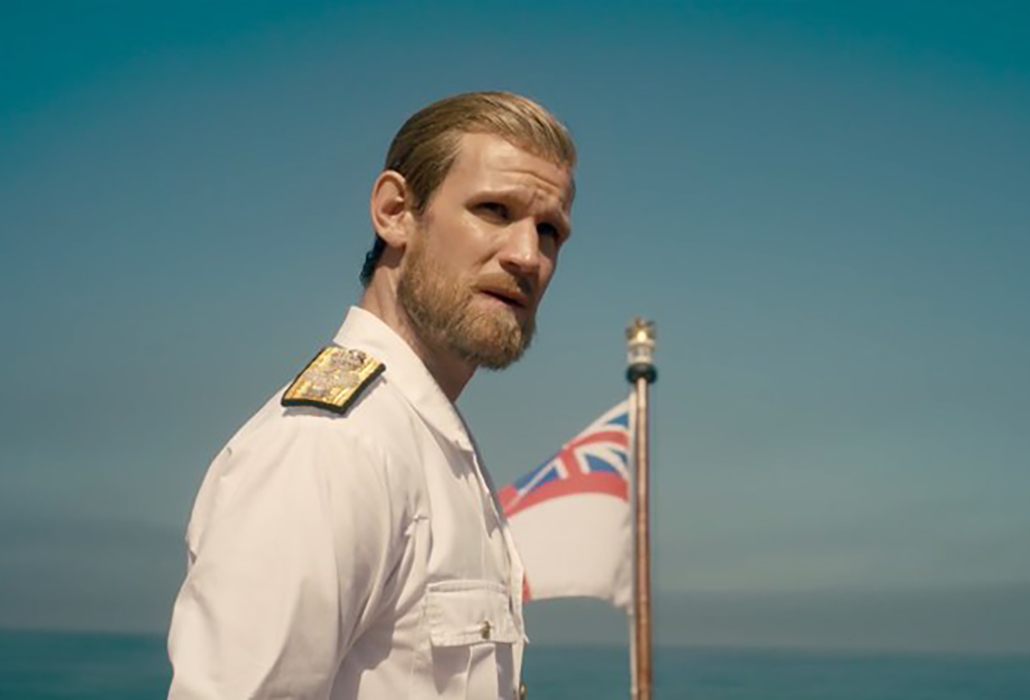 Back at sea, out of the world’s eye growing beards as a statement of masculinity, Phillip and the crew are at his insistence returning an injured native from one of the nations around Tonga whom the Britannia had rescued and operated on for injuries, back home showcasing Phillip’s humanity and love of family.

Phillip is painting watercolours when Parker arrives to tell him his wife has started legal proceedings for his infidelities, which the Duke knows means the Queen knows. Parker is hoping it will all blow away; however, the Duke demands his resignation immediately. ‘You have worked for me long enough you should have understood, no comment, no letters, no scandal could be associated with The Crown’. 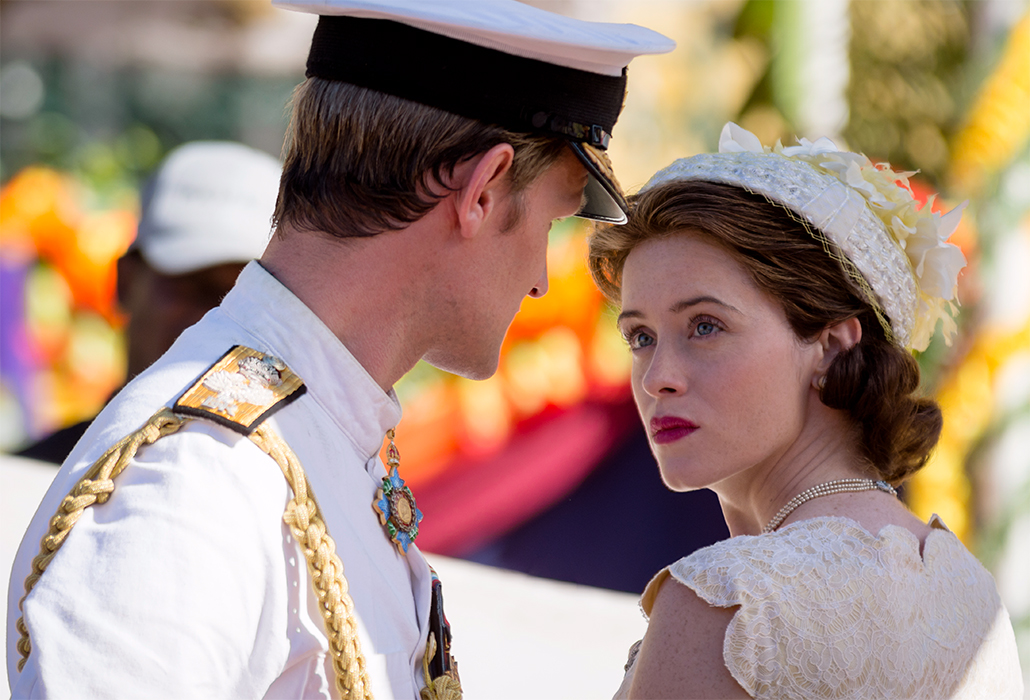 The Admiral sends for The Duke, to tell him he has instructions The Queen will fly out to meet him in Lisbon and he shaves off his beard. He greets Elizabeth warmly as he’s pleased to see her but coldly in response she tells him they will talk later… appearing with him on the steps of the aircraft for the press to take photographs before sailing back to Britain with him on Britannia, giving them time to talk about moving forward.

‘We can’t go on like this’… she requires him to stop whining and help her to fix their marriage. ‘You are lost in your role and you are lost in yourself’. You know divorce is not an option for us ever and asks him what would make it easier on him to be in, not out. 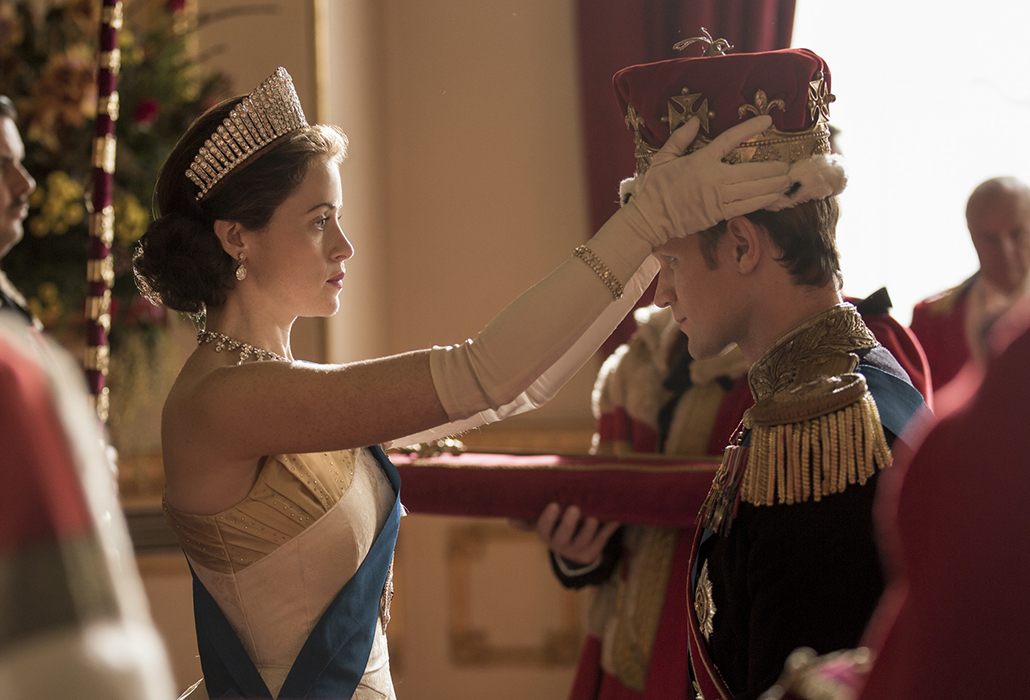 What will it take… for this marriage to work says Elizabeth to Phillip. She wants their life together to be both bearable and meaningful for their own and their children’s sake. He relates how he is currently outranked by their 8-year-old son. I am his father Elizabeth and require respect and so on the 22 Feb 1957 Phillip becomes a Prince of the United Kingdom and Great Britain to be styled, HRH The Prince Phillip, Duke of Edinburgh.

He is adorned with regalia and given a throne next to hers. 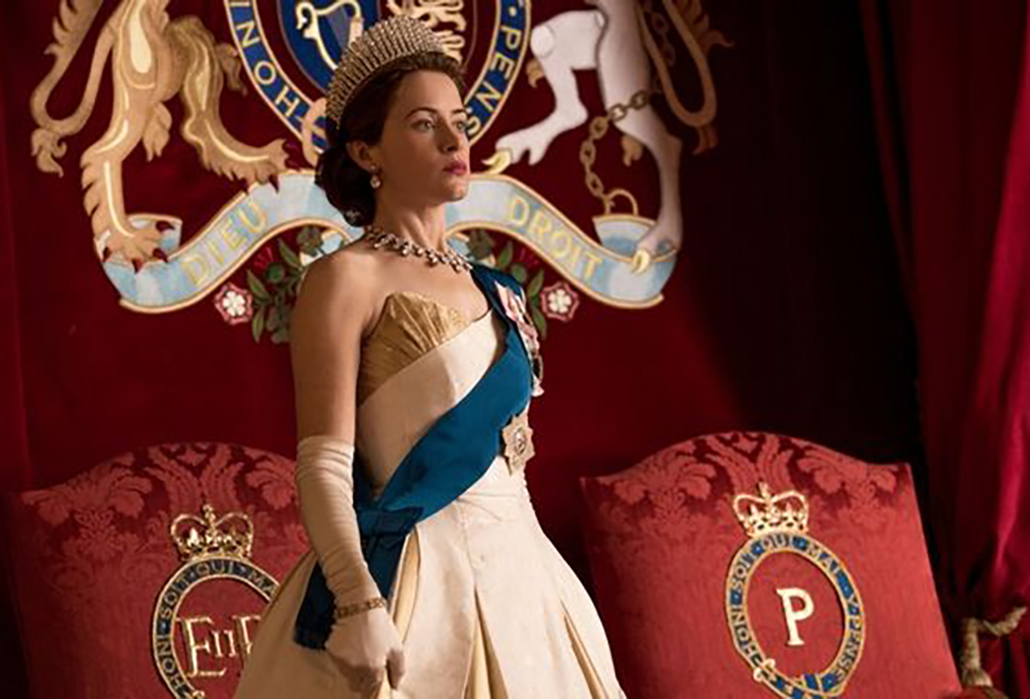 Afterwards she has Michael her private secretary shave off his moustache, which Phillip has explained, are a symbol in the palace of the complete snobbery of those in their employ.

Taking place simultaneously from Warwick to Weipa in towns and cities all over Queensland from July 17 to August 2 the concerts of contrast presented at the Queensland Music Festival will be sure to enhance and change many lives as it contributes to national life, community well being and the…