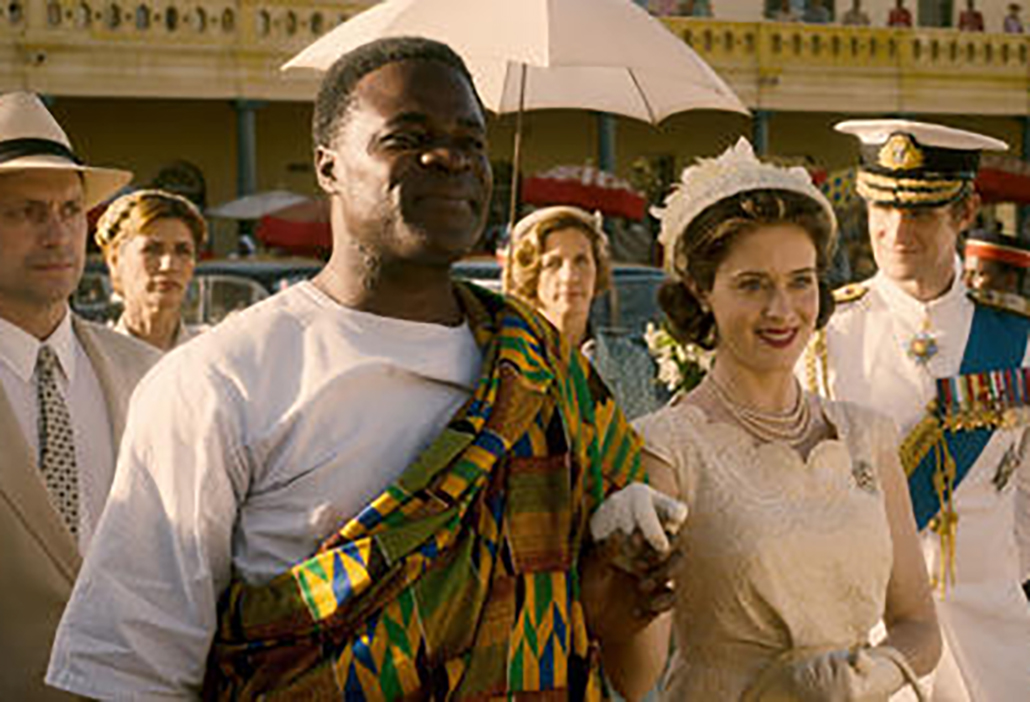 Netflix The Crown, Season 2: Episode 8 continues with Ghana in Africa taking down their photos of The Queen. They want Africa for the Africans and to in the 20th century, to choose their own destiny. Their new President Nkrumah (Danny Sapani) is at the centre of the change.

The Queen (Claire Foy) is at Balmoral inspecting oak trees in the rain and later over lunch, ponders the idea of middle age with her mother. 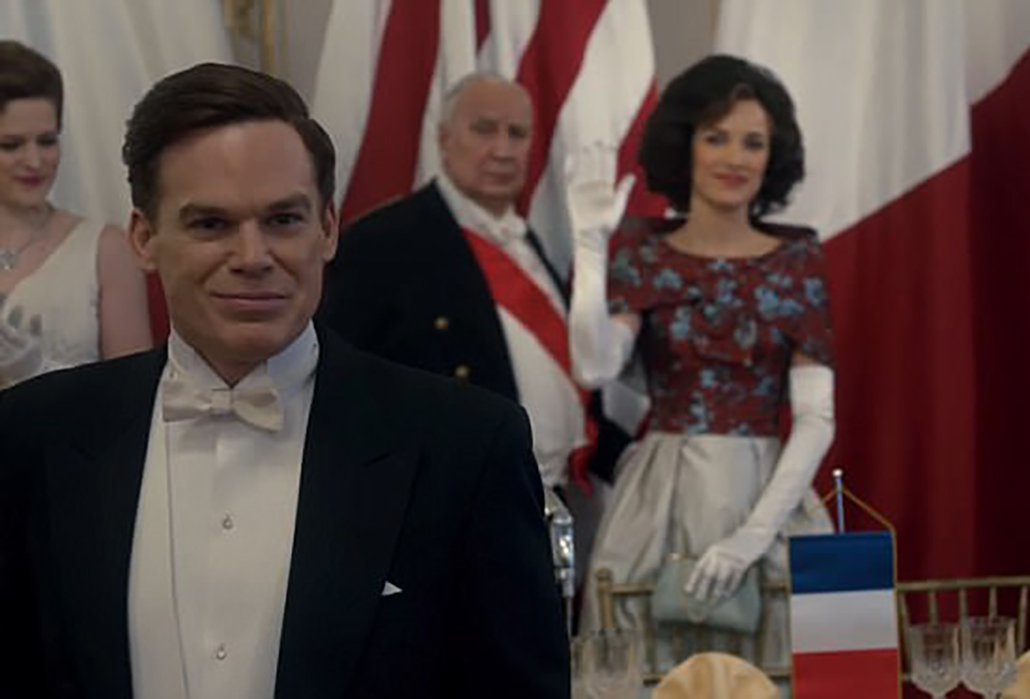 They are watching President Kennedy (Michael C. Hall) and Jackie Kennedy (Jodi Balfour) arrive in Paris on the TV, for they are coming to London tomorrow and will have a private dinner with The Queen and her guests.

Mrs Jackie Kennedy is at this time in history seen as the most glamorous and intelligent woman in the world. 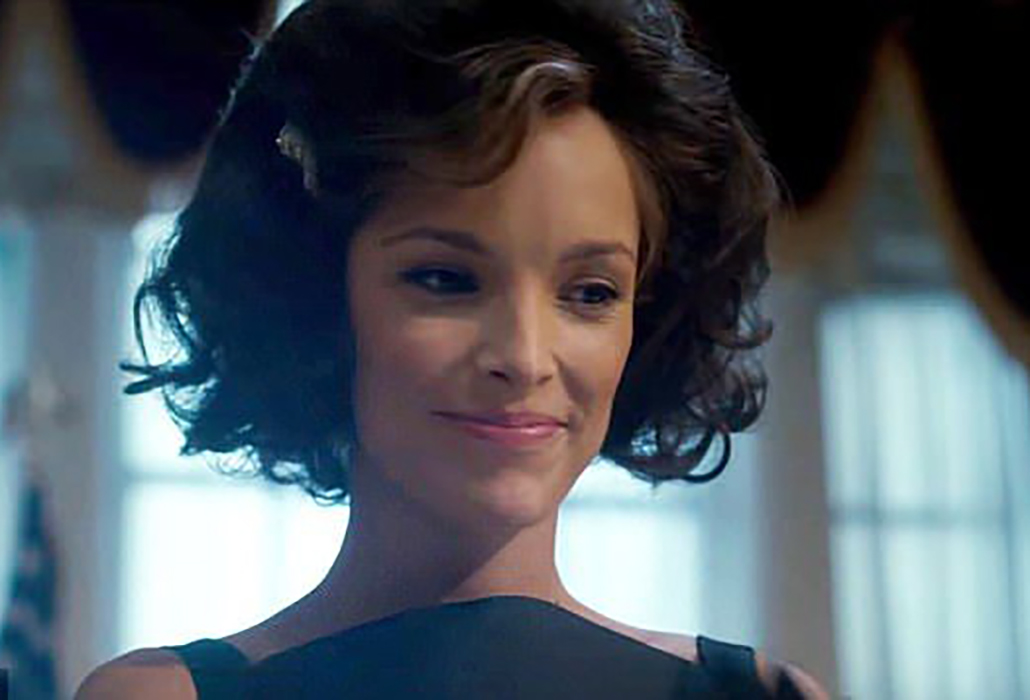 British Prime Minister Harold McMillan (Anton Lesser) arrives at the Palace to bring the Queen news about the Russians visiting Ghana, expressing concern they may leave the Commonwealth. The Russians want a foothold in Africa and he plans to speak to President Kennedy while he is in London. McMillan also tells her about Jackie Kennedy’s numerous accomplishments, he’s clearly a fan. 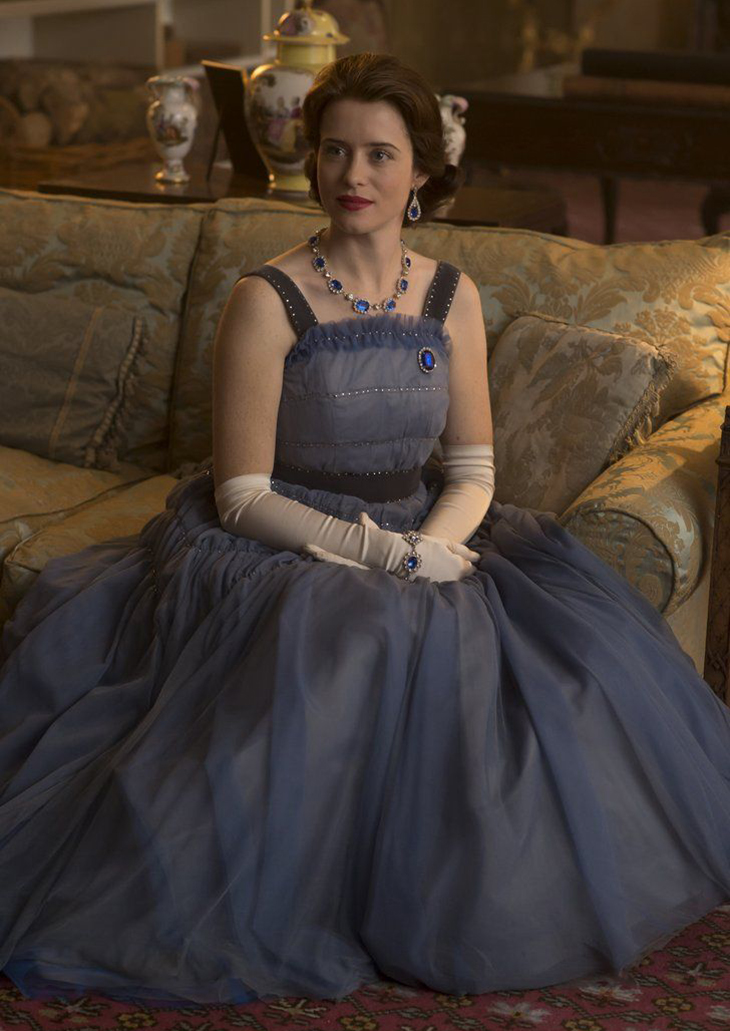 The Queen decides she needs to choose a new gown…and visits the couture establishment of Norman Hartnell telling him she doesn’t want to feel second best; so, he chooses a blue number or her to wear… which surprisingly on the night, she finds a little tight!

All the Queen’s guests go dotty when the American President and Jackie Kennedy his first lady are announced… and rush out of the room to overlook the vestibule to see them arriving.

The Queen finds their behaviour all quite extraordinary… public popularity on such a grand scale hasn’t touched her quite so personally before.

He is excited too, insisting the First Lady sit next to him, despite it not being a ‘state’ dinner. When the President arrives, the protocol goes wrong and Jackie greets the Queen first not using the ‘correct’ terminology.

The President follows and also stuffs up his greeting, although he is aware it all ‘went wrong’ and comments to Phillip who cheers him up by telling him he’s rarely seen worse. 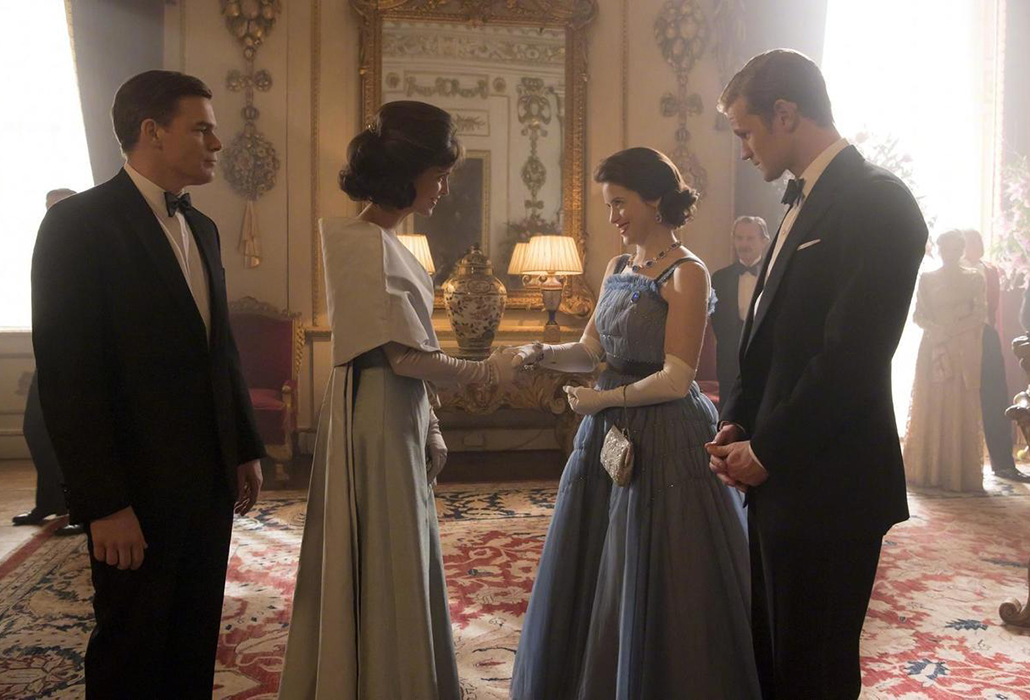 Prince Phillip has a whale of a time with Jackie and the Queen who is overlooking his behaviour, as he reports on how too ‘divine’ Jackie is to the Queen.

He tells her he will take her on a tour of Buckingham Palace but the Queen overhears and insists on taking her on the tour of her house herself. She surprisingly finds her guest very insightful… and they talk about their mutual shyness while looking at a portrait of William Pitt the Younger.

Elizabeth being friendly also takes her to meet the Corgis in her private apartments where a footman is feeding their puppies. They share some confidences. Margaret relates how she heard the American first lady had been indiscreet at another dinner she attended but refuses to give her sister a second-hand reading, telling her to talk to Patrick Plunkett (Sam Crane) whom they both knew growing up.

The Queen sends for Patrick who is now her Deputy Master of the Royal Household. He confirms it was he who told the story to Margaret, but he’s reluctant to answer The Queen’s questions.

I would like to know what was said, so he relates how he overhead the First Lady say she found ‘Buckingham Palace’ second rate, dilapidated and sad like a neglected provincial hotel … a tired institution without a place in the modern world.

I see… comments the Queen. And did she have anything to say about me…she asks? ‘. Embarrassed, he confirms the words he heard were …’your head of state is a middle age woman – incurious, unintelligent and unremarkable’ meaning ‘…Britain’s reduced place in the world was not a surprise but an inevitability’.

A day later Prime Minister McMillan comes to tell the Queen President Kennedy has pulled out of a deal with Ghana over a dam project they are entering into with Russia. It could tip a whole raft of African countries formerly with allegiance to England, over to the other side. 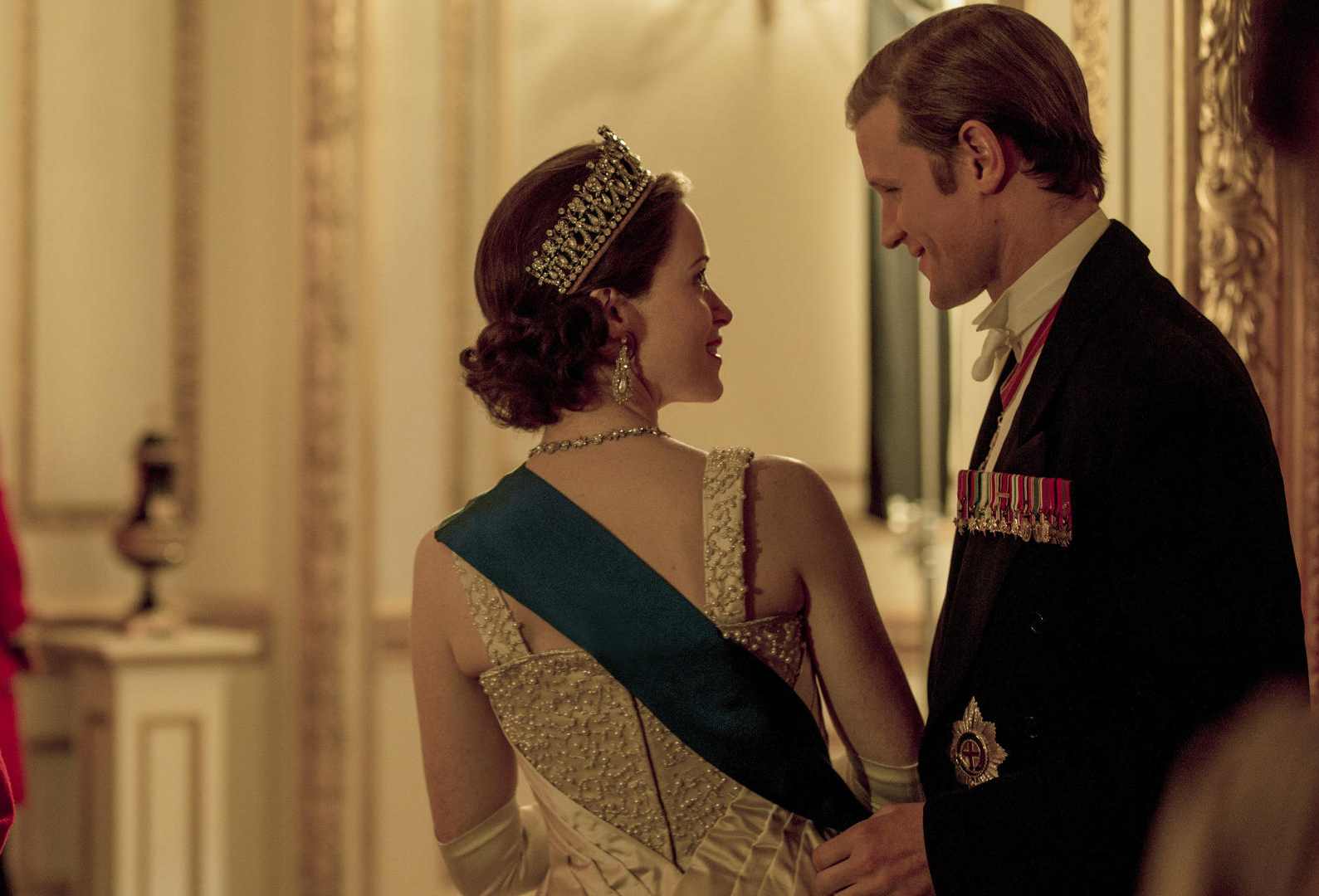 Still smarting from Jackie’s insults the Queen decides she wants to go to Ghana to defend the Commonwealth as its head. Absolutely not says Prince Phillip, Prime Minister McMillan and her Private Secretary who all agree, it would be unsafe and provocative.

Later on, the plane to Ghana Phillip tells her she’s being naive… she’s the English lamb the lion of Africa will have for lunch. She is determined she is doing the right thing…wanting to prove she is not a puppet monarch. 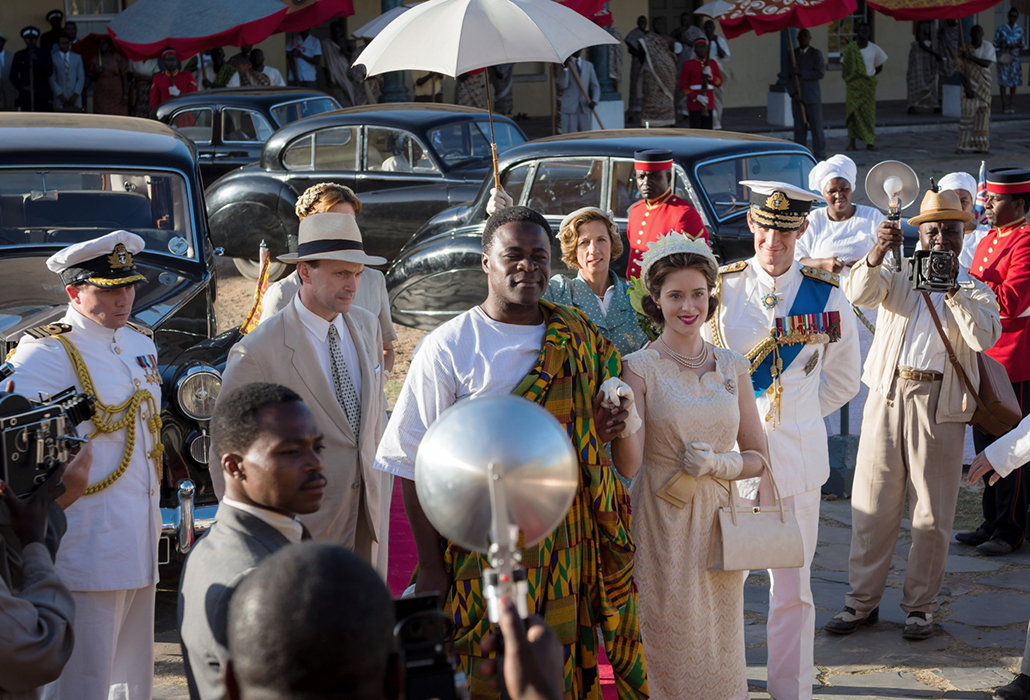 What a triumph she turns her visit into, not phased at all by being snubbed and overlooked by President Nkrumah of Ghana, she puts on her brave face after photos are taken and he storms off leaving her and the English party in his wake.

McMillan reports by phone how he’s discovered she is being used and so realises she is required to turn it all around if she can and make Nkrumah come back to the table again with Britain. 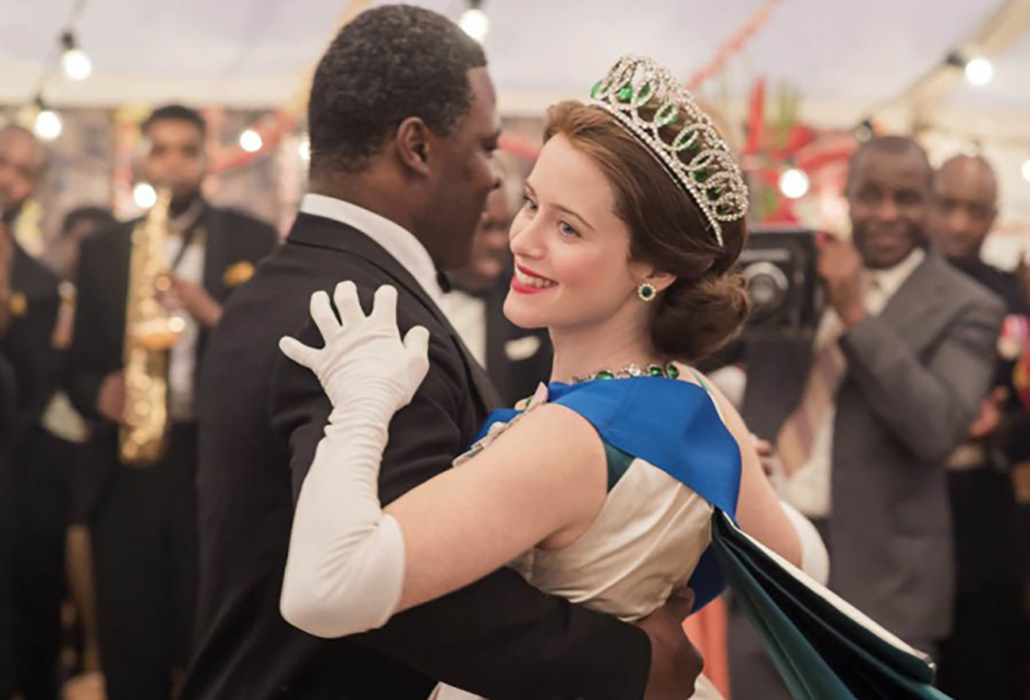 At a state dinner, where she is being in the main ignored, she sends her Private Secretary to the President, inviting him to dance with her. She knows only too well how his actions will be perceived by the people there and the press especially if he snubs her in front of them all. 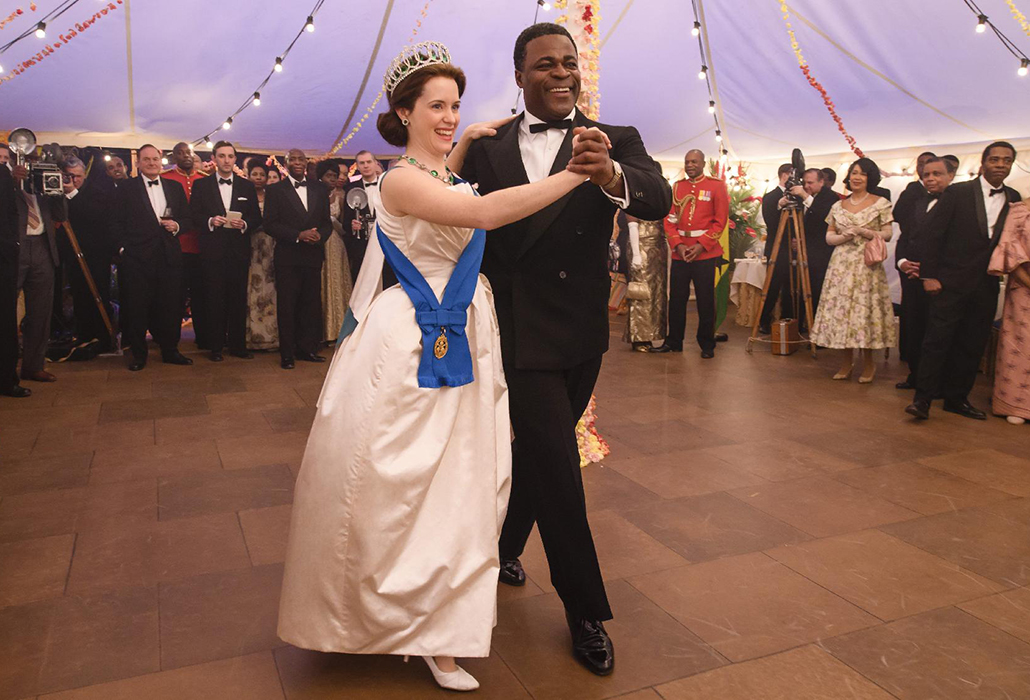 An African dancing with the white Queen – at the time this was definitely a first. And he obliges after she asks him if he understands ‘the terms’.

Better the enemy you know than the one you don’t and they foxtrot together happily around the floor. 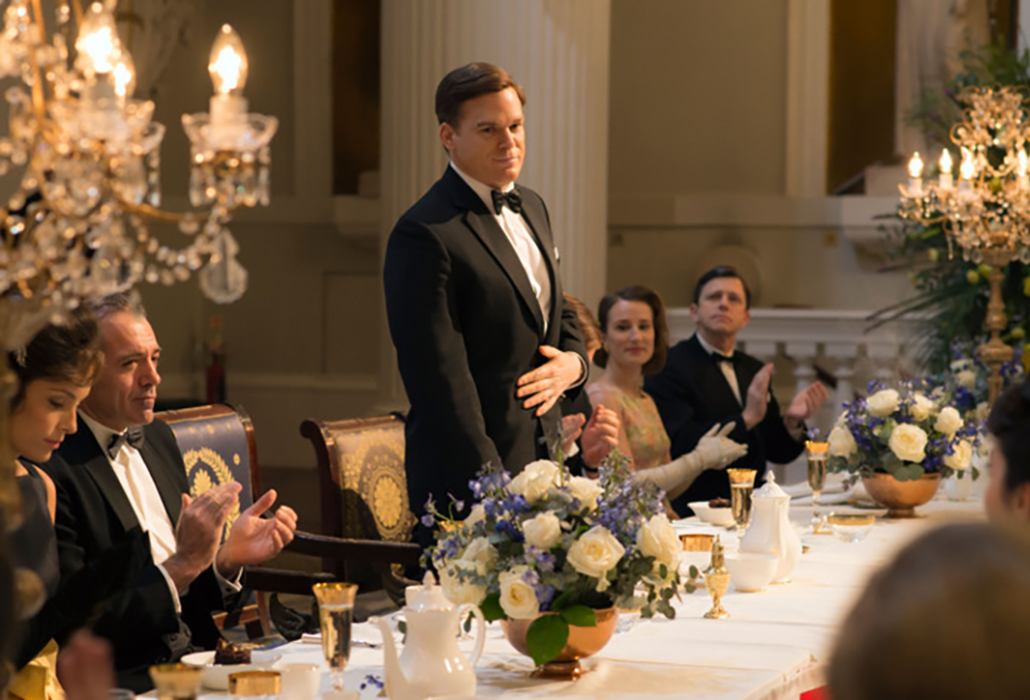 Over in America Jack Kennedy gives one of his inspiring speeches, and in the aftermath, is seen by his wife to be stroking another lady’s back. 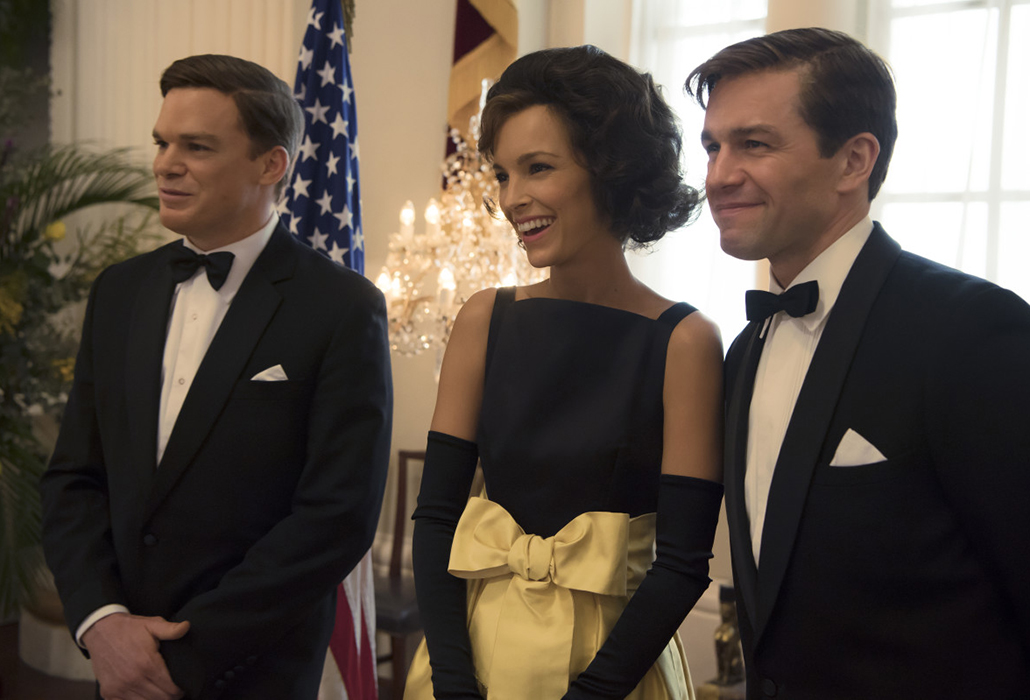 He confronts her afterwards, congratulating her for spurring the Queen of England to achieve great things by insulting her. He mocks his wife and tells her how he knows the Queen took Jackie’s remarks at a private party personally after they had been reported to Her Majesty, taking up the gauntlet, she had achieved great success on behalf of her country.

The Queen finds the government are pleased with her achievements when she arrives back home where she finds a personal request from Jackie Kennedy to visit her privately. 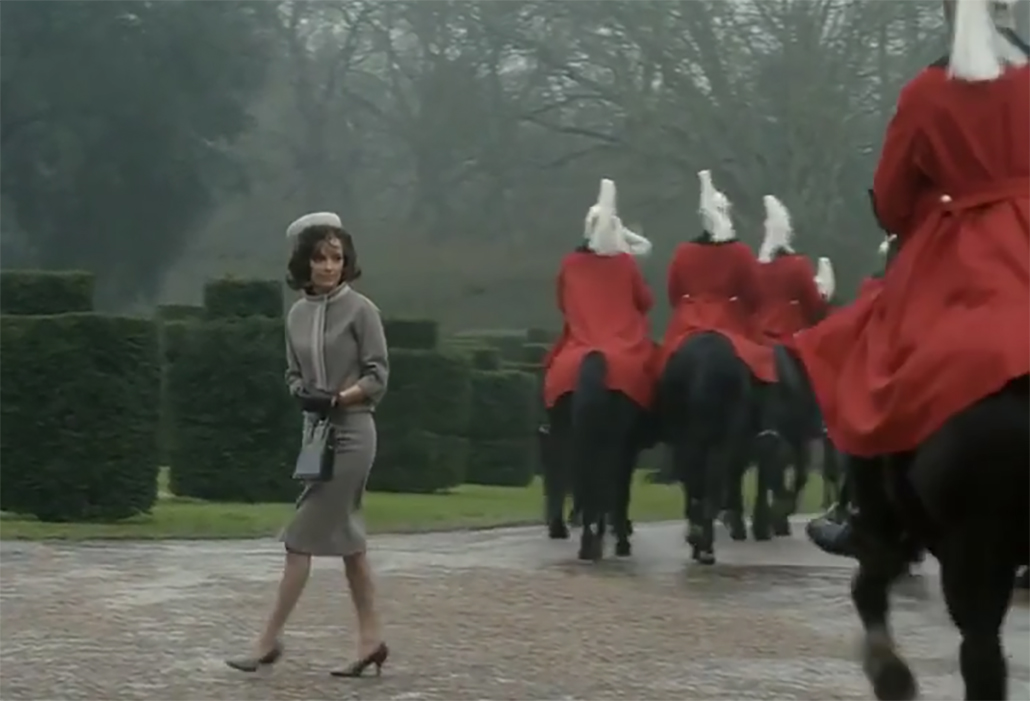 She invites the First Lady to Windsor Castle.

Sometimes only a fortress will do if you are endeavouring to impress someone. It helps to make those who are intimidated feel small against all that ages old tradition and an impressive show of military might from those guarding the Royal family when they are not in town.

Jackie arrives as the Queens’ Guardsmen all ride by on gleaming black horses in full regalia, including their red greatcoats. A Grenadier guard contingent also march by too; it’s all marvellous stuff, perfectly timed. 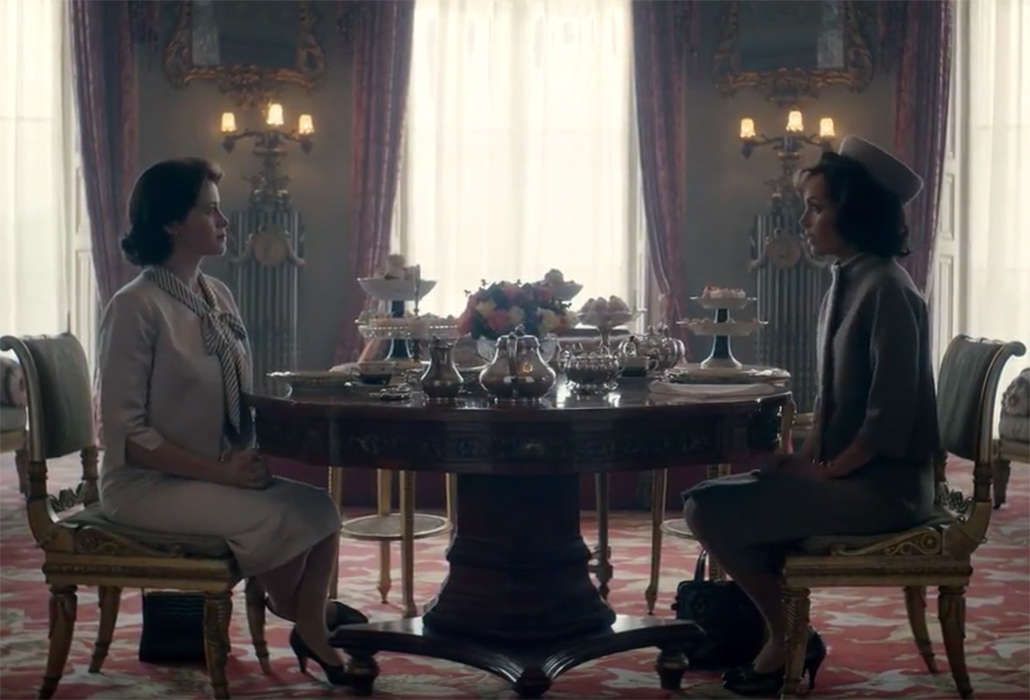 The Queen lays on tea in the Drawing Room where a full complement of red liveried servants is in attendance. After they have made their first impression, the Queen dismisses them as Jackie is suitably overcome offering her hostess an apology.

Jackie Kennedy confesses her foolish comments and says she has no excuse, but would like to offer an explanation which the Queen listens to quietly. 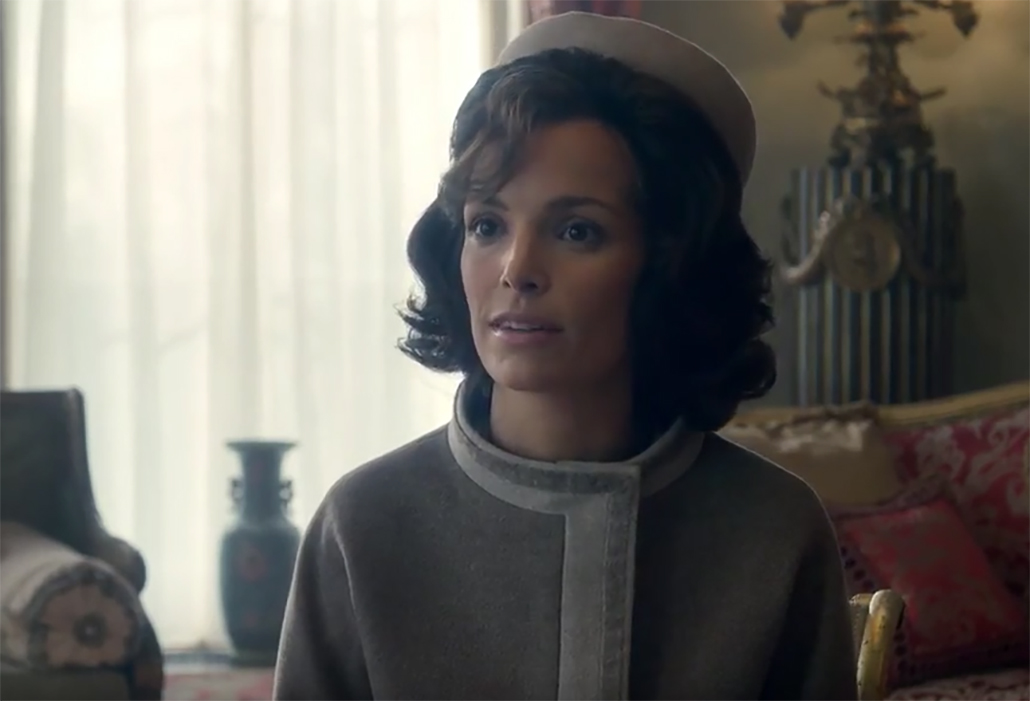 Riding on a high… I have been having post-natal pressures since the birth of our son and so I enjoyed myself in Paris much to Jack’s chagrin behind ‘closed doors’.

She tells her about their addiction to injections that help them stay on the up and up and compliments the Queen on the way she copes with all the pressure, does her job and retains her composure and dignity. What you did in Ghana was just extraordinary. 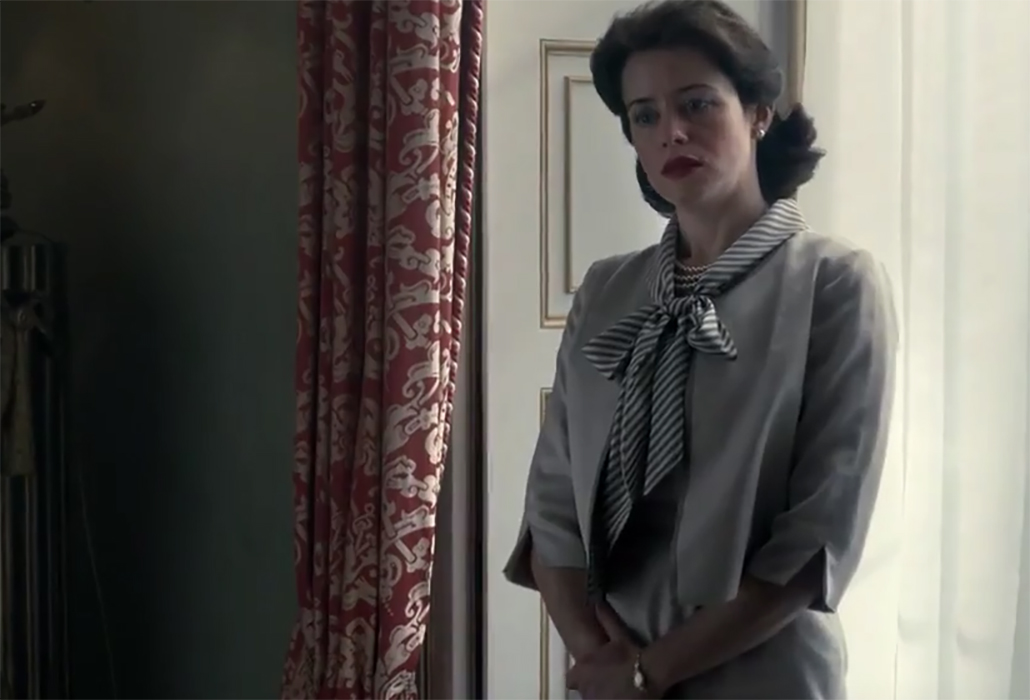 When lamenting her choice to Phillip later, of not telling her lovely rival how she inspired her to do what she did in Ghana, The Queen feels ashamed. You let her say her peace… he offers. But she was so broken, fragile and lost she comments on reflection and feeling remorse.  Triumph can be a hollow thing…

Sometime later when working out on the estate The Queen is summoned back to the house to the news that President Kennedy had been shot in Dallas. She and her mother watch the coverage on TV and the Queen overcome with emotion, orders the English court will observe a week of mourning. 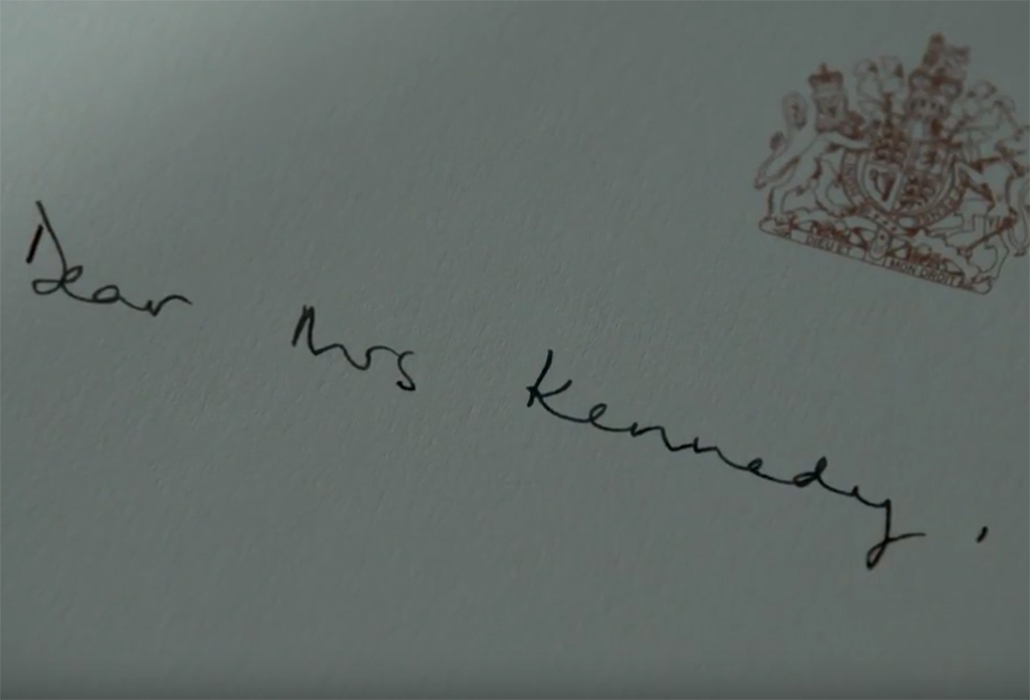 The Queen asks Michael to arrange the ringing of the bell at each minute for an hour at Westminster Abbey, an honour usually reserved only when there is a death in the royal family. Then she sits down to write Jackie a letter… Dear Mrs Kennedy x