Since 1990, the Alliance Francaise Film Festival has enthralled Australian film lovers on an annual basis with their delightful mix of French movies each year, and it is now the largest French film festival outside France. In March 2017, a wonderful collection of 45 French films were shown in Australian cities at Palace Cinemas. 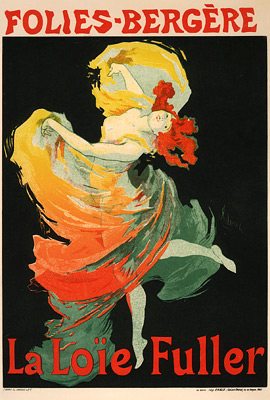 The Culture Concept Circle was delighted to be a part of a special preview of the festival, and a showing of The Dancer (La Danseuse) at Palace Cinema Como, in South Yarra, Melbourne. Following some champagne, brie, and bonhomie, the full house sat back to enjoy the film, both visually stunning and terrifically heart-rending.

The Dancer (La Danseuse) is directed by Stephanie Di Giusto and was initially shown in Un Certain Regard section at the 2016 Cannes Film Festival. Loosely based on a true story, it tells the tale of the legendary Loie Fuller, played by the inimitable Soko, a French musician and actress. Loie’s story begins in wilds of Nevada in the United States of America, at the tail end of the 19th century. She is living with her father in what appear to be trying circumstances, but they both seem content with their lives.

After misfortune strikes, Loie makes her way to Brooklyn, New York, to stay with her mother, played by a superbly uptight Amanda Plummer, who has taken up with the Temperance Movement. She is living a very austere and unforgiving life.

Loie does not fit in here, and dreams of performing on the stage. A succession of unfortunate auditions and bit-part roles ensue, and along the way an ill-fitting costume malfunction provides inspiration for her to create a dance that becomes the Serpentine.

The Serpentine is a visually spectacular dance utilising yards and yards of silk, spinning and twisting in a glorious display. This dance, and the creation of it, was so revolutionary, that Loie Fuller is now considered to be one of the founders of contemporary dance.

The dance has a luke-warm reception on its first showing, and it is at this point she attracts the Count Louis Dorsay, played by Gaspard Ulliel. Louis spends his time chasing hedonistic pleasures, and soon sets Loie in his sights. Loie, however, has the last laugh, and soon sets sail for Paris utilising Louis’ funds, unbeknownst to him. The film is a wonderful portrait of an artist with an unerring belief and a single-minded passion. Loie’s choice to run away to Paris to pursue her dream is one that I’m sure many of us romantic souls have day dreamt of every now and again. The image of Loie standing on the ship’s deck on her way to her future is a powerful and exhilarating one, and certainly started me considering a move to France!

Upon her arrival in Paris, Loie heads immediately for the Folies Bergere, one of the most famous of all the dance halls in the city. She manages to talk her way into an opportunity to perform her dance, having caught the eye of Gabrielle, who is in an influential position at the hall, and it is here that Loie’s intense belief in her dance becomes more apparent, and much of the story takes place. The dance is everything to her, and she will do anything to ensure its success. Her training regime is so gruelling; she is constantly in pain. Her disregard for cost is frustrating for all who work with her, as she insists on ever brighter electric lights and new costumes for her many stagehands. And her emotions sometimes get the better of her, as she is overcome by the pressures of succeeding. Max Richter’s amazing soundtrack, made up in equal parts of poignancy and of beauty, captures this emotion perfectly, adding another layer to the experience.

Much of the story is an exploration of the training, the anticipation, and the preparation of the performance, first at Folies Bergere and then at the Paris Opera House. However the resulting dance is a visual triumph in every respect, as Loie twists and turns the many folds of silk material around her, and coloured lights illuminate her every move.

The film is a visual feast, as Loie dances the Serpentine, the layers of silk flying around her, highlighted by iridescent coloured lighting, utilizing the newly discovered electric light bulb; as Loie and her troop of lovely young dancers train in the woods behind a beautiful French chateau, running and prancing like horses, or splashing in puddles, pretending to be frogs; and as the heroine and her dancers sit down to twilight dinner al fresco, a drowsy collection of Greek goddesses.

Soko is captivating as Loie Fuller, the avant-garde performance artist. Born Stephanie Sokolinski, but better known by her stage name Soko, she gives a heart-felt and passionate performance as Loie. Gaspard Ulliel gives an engrossing performance as the oily Louis, while Melanie Thierry is wonderfully understated as the stable Gabrielle, who immediately sees potential in Loie upon her arrival at Folies Bergere, providing a strong helping hand and becoming her greatest supporter. And Lily-Rose Depp is luminous in her petite role as a young Isadora Duncan, who joins Loie’s dancers, although it quickly becomes apparent that she is anything but just one of the chorus.

The Dancer was the perfect entrée to get in the mood for the Alliance Francaise French Film Festival. C’est magnifique!