Academy Award, BAFTA and Golden Globe winning actor Eddie Redmayne OBE (b.1982-) has extraordinary gifts, a view formed from watching aspects of his splendid body of his creative work in theatre, television and film. This includes his mind-boggling performance as celebrated physicist Stephen Hawking in the stunning Theory of Everything.

From playing Antony Babington in Elizabeth: The Golden Age to William Stafford in The Other Boleyn Girl, Colin Clark in My Week with Marilyn and Marius Pontmercy in Les Miserables, Redmayne whose arresting qualities I would venture to suggest have been known to his mother since birth, has made bold and interesting choices for characters since he first appeared on stage as a workhouse boy in Oliver at the London Palladium at 12 years of age.

He then appeared in 1998 aged 16 in the television series Animal Ark. before taking on his first notable role aged 20 interestingly as a girl in 2002. This was when following tradition in the theatre he played Viola on stage at Shakespeare’s Globe no less, in the bard’s popular work Twelfth Night. As Viola, disguised as a man and whose life is complicated when a woman falls in love with her thinking that she is a man, you could say he garnered attention. All these years later acclaimed Swedish actor Alicia Vikander is portraying illustrator and artist Gerda Wegener who falls in love with the character Eddie Redmayne plays in the film The Danish Girl, Einar Wegener, marrying him believing he is a man.

A defining moment for Gerda and Einar is when she asks him to slip on a pair of silk stockings and pumps to stand in for a female model who fails to turn up for a portrait sitting for her. He obliges, only to find his whole world spinning as he is galvanized by emotional turmoil, especially when she gives him a dress to wear.

Deep down he is feeling like he’s becoming liberated from the life he has been living until that point and transitioning to another as someone else, but can it be?

The Danish Girl was recently well received at the Toronto International Film Festival after premiering in Venice a few days earlier. It’s coming to Australian cinemas later this year.

Above all a love story, when one human being without thought for self helps their partner in life to travel a new road, one that means in the end they will be apart, The Danish Girl is all about forgiveness, compassion and selflessness.

Directed by Tom Hopper, it highlights the different aspects of the human condition we must all learn to appreciate and come to terms with as we move forward on this ever-shrinking planet together. They are invited to a party given by their friend Oola (Amber Heard) and Gerda playfully suggests Einar dress as a woman. Going along with the suggestion for fun, they shop for a wig and dress for Einar.

Gerda helps him to apply makeup. However what she believes is just fun thing to do, fooling people they know and those they don’t, does not turn out, as she would like.

Something quite significant happens. Once Einar is out and about in public as Lili he doesn’t want to go back to being a man.

Instead he wants to be born anew, especially when a handsome stranger at the party is not only attracted to him, but is also caught kissing him (her) by his wife.

Slowly Einar is taking on the persona of the woman he will become Lili Elbe, an iconic transgender pioneer of the 1920’s.

Assigned male at birth in 1882, transitioning in 1920, for Wegener it was about human nature. Wegener underwent the difficult and dangerous operation to change his gender at a time when it was verging on experimental, the first to do so, he did this with his wife’s tender care and loving support.

Adapted by the best selling fictionalised version of Lilli’s life by American writer David Ebershoff, the screenplay has be written by Lucinda Coxon.

Today medical science is revealing so much more about our human condition including our gender genes and how the brain works; the findings proving it to be radically different from perceptions formed in the not so far away past.

Nothing is set in concrete and the world can certainly not be seen in terms of black and white, least of all in regard to either our humanity or sexuality.

For those who believe they are another sex entirely from the body they find themselves inhabiting, it must be excruciatingly difficult. 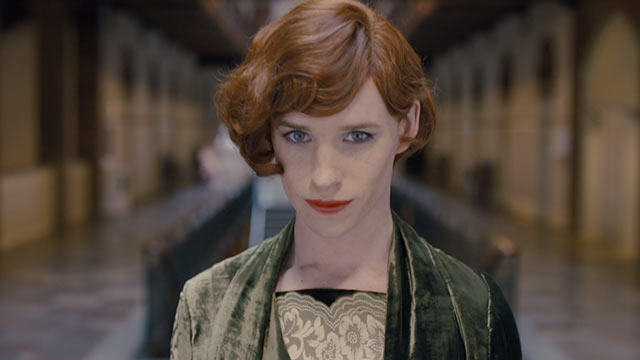 Many babies are born dual gendered and in the not so long ago past here in Australia Dr’s were left to make the decision which one to choose for a baby born as both, a choice that would go on to later affect the lives of many.

These days the decision to determine the sex of a baby is placed back firmly on the parents who must decide. What an agonising position to be placed in and what if you get it wrong? Heart breaking for all.

Gender is certainly a subject that can and does fire up many emotions and exposes different points of view.

If anything the movie by all accounts to date is both sensitive and compassionate as Einar transforms to Lili with confusion, pain and longing.

Gerda and Lili’s bond of friendship slowly strengthens and she develops a new style of love for her once and very special man. This is a story that transcends stereotypes and does not confuse gender with sexuality as so many are inclined to do.

Eddie Redmayne obviously had a lot of psychological processes to go through himself in order to play this role, in his quest to have his characterizations as real as possible.

He said in an interview “My greatest ignorance when I started was that gender and sexuality were related”. Redmayne said.

“And that’s one of the key things I want to hammer home to the world: You can be gay or straight, trans man or woman, and those two things are not necessarily aligned.” He commented.*

The Danish Girl starring Eddie Redmayne, as Lili Elbe should be a very special experience.

Based on The Danish Girl by David Ebershoff

A temporary architectural pavilion made of bamboo the so-called ‘green steel’ of the 21st century, will be on display June 24 – December 10, 2016 at SCAF Sydney