South Australian philanthropist David Roche (1930-2013) set up a foundation trust in 1999 to educate, conserve and present his significant legacy of decorative arts to the world at large.

Following his death a new gallery was built next to his house in North Adelaide by his friend, consulting antique dealer and Director Martyn Cook, as part of the David Roche Foundation House Museum and Gallery complex he gifted to the people of Australia.

During his lifetime David Roche’s travels took him to many exotic climes, where in establishments both grand and simple, he encountered and sometimes procured, splendid works of decorative art in the distinctive curvaceous Rococo style or taste. The Rococo style had a distinct love for asymmetry with the extensive use of c and s scrolls and manifested itself in the decoration of small, intimate, luxurious and harmonious interiors of which the eighteenth century, particularly in France, excelled.

The Rococo style featuring in Gallery 2 of the themed opening exhibition in North Adelaide is gracefully exuberant.

It is dominated by a fabulous portrait of a lady in the guise of the Greek goddess Artemis.

The Romans called her Diana, and this lovely portrait is from the studio of Jean-Marc Nattier, who specialized in recording many of the beautiful aristocratic women of his time

Graceful and charming, she is not unlike all of Nattier’s sitters.

They enjoyed his ability to offer them innumerable guises to embrace with perhaps his most famous sitter Jeanne-Antoinette Poisson, Marquise de Pompadour a considerable woman of influence. A member of the haute bourgeoise, Reinette as her friends and family knew her managed to rise above her station to become official mistress to the King of France Louis XV and as such, leader of the fashionable Rococo style.

The word Rococo derives from Rocaille the name for the shell work and rockwork popular in garden grottoes during the Louis XIV or Baroque style period in French design history.

In the first thirty years of the century the style was first known as Regence after Phillippe, Duc d’Orleans, Regent over the young Louis XV.

The Rococo style appealed to men of learning by exploring the possibilities of a line of beauty. England’s painter and satirist William Hogarth (1697-1764) wrote a whole treatise about it the “Analysis of Beauty’ (1753), remarking that its forms ‘led the eye on a wanton kind of chase.’

In France painter Jean Antoine Watteau (1684-1721) heavily influenced its development by inspiring a genre of painting known as the Fete Galante with his vision for worldly elegance widely emulated through his engravings published posthumously.

It gradually came to fruition and by the middle of the eighteenth century, was writhing and spiralling its way into rooms all over Europe. Chinoiserie (the imitation of the Chinese) highlighted a passion for Oriental wares. It was a style evident in so many areas of the visual arts especially the manufacture of the all-new European porcelain wares now being produced.

David Roche particularly enjoyed the French taste for the Oriental, which gained popularity among the haute bourgeoisie during the reign of Louis XV, fuelled by imports from the Compagnie des Indes. This is reflected in the decoration of the main bathroom in his house museum and in other ornament throughout the house and exhibition including a stunning trio arrangement in Gallery 2.

It features a glorious eighteenth century lacquered commode centre stage with a sublime terracotta sculpture sitting on its marble top with a ‘Chinoiserie’ style painting above.

Together they are a wonderful statement of the Rococo style’s charm and appeal. The painting of an interior scene with a musician, oil on canvas by Pierre Jollain is signed and dated 1754 and reveals an elegant woman listening dreamily to a serenade.

Pierre Jollain was known for his mythological or religious paintings and this ‘gallant’ scene invites us all to participate.

The glorious terracotta sculpture showcases a Chinese man arranging flowers in a reclining ladies hair. It is superbly detailed and has been attributed to French sculptor Josse-Francois-Joseph Leriche (1738-1812). He was active at the Sevres Manufactory after 1757 as a pupil of the sculptor Falconet and became famous for the brilliance of his bisque models. In 1780 he became chef des sculpteurs, known for his vases.

Attributed to French ébéniste Pierre-Antoine Foullet, the black and gold Commode has gilded bronze mounts and a marble top. Chinese Lacquer was being imported into England and Europe in quantity at this time and inspired the painted Chinoiserie decoration, produced by a technique known as Vernis Martin. French lacquer ware artists Guillaume (d. 1749), Julien (d. 1752), Robert (b. 1706—d. 1765), and Étienne-Simon (d. 1770), known as the Martin Brothers, developed a lacquer finish in their factory, which in 1748 became part of the Royal Factory of Furnishings to the French Crown. Some twenty to thirty layers of the specialist lacquer was applied, each smoothed down before the next application the final decoration was, flowers, pastoral and landscape scenes. Robert’s son also worked for Prussia’ Frederick II the Great at Potsdam and so he spread their influence far and wide. It was the fantasy of Cathay that fired the imagination. Travel stories such as Nieuhoff’s Travels by Dutch traveller Johan Nieuhof fuelled a desire to share some of the magic. He travelled from Canton to Peking in 1655-1657, which enabled his professional reputation as an authoritative western writer about China.

Lost for all time on one of his journeys on the isle of Madagascar believed murdered 150 illustrations from his book were an inspiration for those who loved Chinoiserie during the eighteenth century.

David Roche gathered an enormous collection of porcelain sculptures, many made during the Rococo period, on display in Gallery 2 in a superb breakfront cabinet.

Many artists and architects of this period based their designs on the pictures in the book and interestingly, original drawings were rediscovered in 1984 in the collection of Prince Roland Bonaparte who collected material about Madagascar, Lapland and the Native Americans. Grotesque and arabesque ornament by artist Jean Berain and his son was also widely employed, along with featured figures from the Italian Commedia dell’Arte, including Harlequin and Columbine and their friends.

Jean Baptiste Pillement (1728-1808) was another name synonymous with the use of Chinoiserie decoration in conjunction with Rococo design.

In interiors mirrors were placed over fireplaces which sported superb assymetrical gilded clocks , with pier glasses (trumeaux) also gaining in popularity together with white and gold colour schemes for walls, aiding the reflection of light.

Smaller scale furniture was much in demand throughout the Rococo period as it was such an ‘intimate’ style, and the legs, and arms of tables and chairs gaining curvaceous cabriole legs, sometimes enriched with carved shells on knees, sometimes terminating in claw and ball feet or sabots de biche (deer hooves). 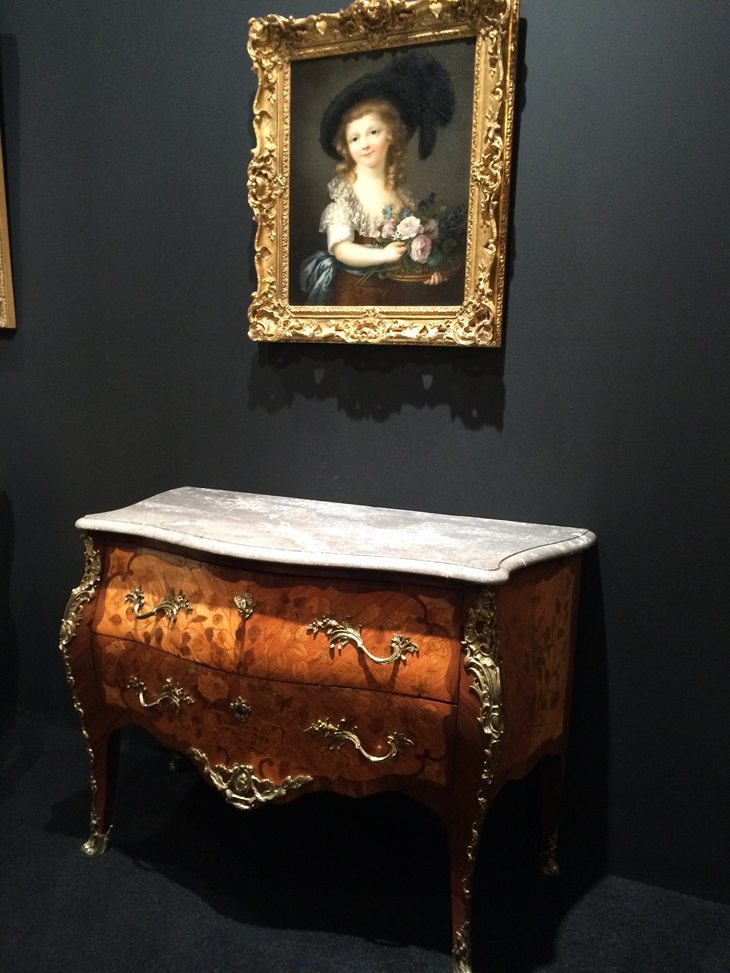 The so-called Countess Cadogan commode c1750 is made of amaranth, kingwood and tulipwood, featuring ormolu mounts and a marble top with foliate sabots.

It came down through the years from the fifth earl, nephew of the 1st Duke of Wellington and sold by the Countess in 1960 and ended up in the collection of James Fairfax AC OBE prior to David Roche purchasing it.

It has fine floral marquetry, which is all about the art of inlaying a veneered ground with other veneers in different exotic timbers to make a pictorial design.

Above it is the fine painting in oil on canvas 1767, of a charming little girl wearing a grand black plumed hat and carrying a basket of flowers, which painted by Jacques Antoine Marie Lemoine (1751-1824) who also worked in watercolour and porcelain Much of the early design and painting on porcelain had been based on traditional blue and white wares from Cathay but as porcelain became enormously fashionable with factories first at Meissen in Germany and in France at Saint’ Cloud, Chantilly and Vincennes, the latter becoming the Manufacture Royale de Sèvres (1753).

Everything changed as colours came into the equation and were both superbly produced and presented, especially all shades of blues, violets, pinks and greens. 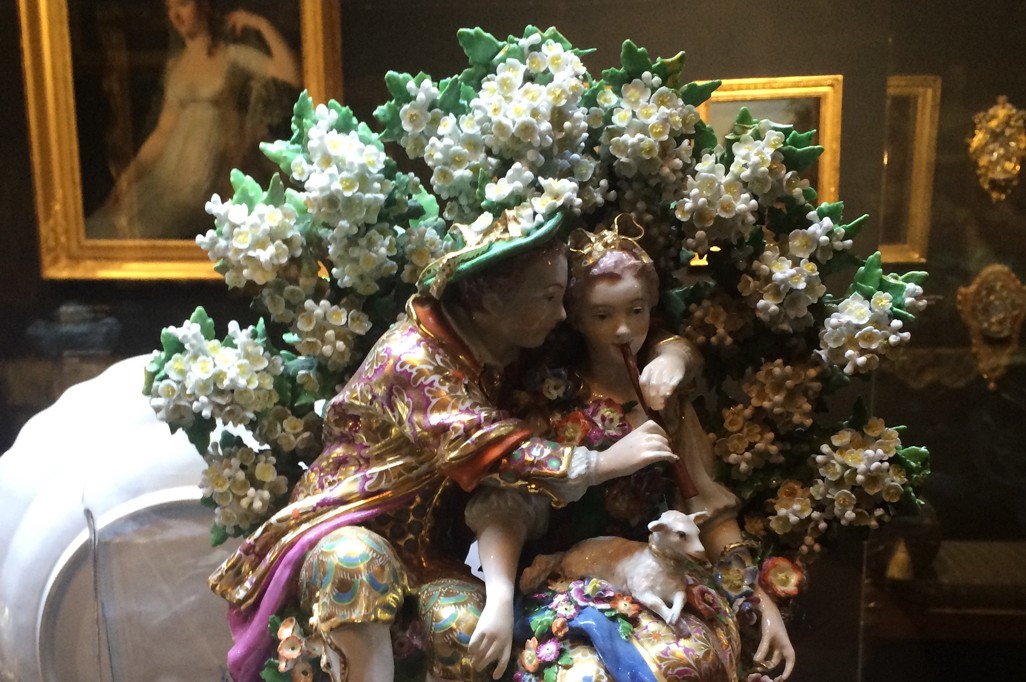 Over in England the Chelsea porcelain factory excelled first, with soft paste wares including the lovely Music Lesson an ambitious group by Joseph Willems (1716-1766) their renowned modeller

Porcelain’s popularity never waned throughout the eighteenth century and wonderfully painted plaques were also set into sides of commodes or writing tables from around 1750 and used as the top of small coffee or worktables. David Roche adored Meissen and during the first decade of the eighteenth century groundbreaking hard paste porcelain wares, produced under the patronage of Augustus the Strong in Saxony would inspire and motivate many others by their success

The manufacture of Meissen porcelain differed from the Chinese by its relatively high proportion of the mineral kaolin; about 50% against the Chinese of 30%. Joachim Kandler (1706 – 1775) who had trained as a sculptor in Dresden, became the greatest of their porcelain modellers, responsible for much of the success of the Meissen porcelain factory.

David Roche’s wonderful plate from Catherine the Great of Russia’s Swan service is a tour de force of modelling, design and style.

Joachim Kandler (1706 – 1775) was trained as a sculptor in Dresden and was destined to become the greatest German porcelain modeller, responsible for much of the success of the Meissen porcelain factory during the 18th century.

It was around 1728 that Kandler began producing the so-called ‘swan’ set, whose richly embossed decoration on plates depicted swans floating on water surrounded by water plants and bulrushes was a wholly new European concept. David Roche’s example alongside all his other Meissen is superb.

It is interesting to note that Augustus the Strong’s claim to fame today mainly rests on his ownership of Meissen, the first European factory to produce porcelain in the west, rather than on the battles he fought.

Rather confirms the power of the decorative arts to influence society. While they may be changing in format books are not going out of style soon and celebrity authors are on show at the Sydney Writer’s Festival 20 – 26 May, 2013