The David Roche Foundation House Museum and Gallery (TDRF Adelaide) glittered gloriously with refracted light as it bounced beautifully off a surfeit of gold and crystals in the icy chill of a crisp late autumn night as guests arrived for its official opening by former Prime Minister, The Honourable Paul Keating.

The precious jewel box contains many glorious jewels, representing a pinnacle of excellence in the evolution of design and handcrafted decorative arts, which successful Adelaide businessman, dog judge and breeder David Roche AM (1930-2013) gathered together during his lifetime. David Roche pursued beauty, quirkiness and perfection in all his specific areas of interest, which included paintings, sculpture, fine furniture, porcelain, clocks, silver and superb objet d’art. The champagne flowed and all the guests were royally entertained.

The opening night atmosphere was both relaxed and informative, with everyone finding out just a little bit more about the benefactor collector who hoped ‘… everyone visiting would leave having found a favourite piece to remember’.

From the wait staff as they set up for the opening party to the some 260 invited guests all arriving dressed to the nines, many expressed just how overwhelmed they really were. It was not hard to be dazzled, enchanted and amazingly uplifted by the extraordinary themed exhibition the museum’s Director Martyn Cook and Curator Robert Reason presented as an outstanding themed display in the trio of new galleries attached to the house. The house museum now re-installed after repair work as it was lived in and enjoyed by Mr Roche during his lifetime, reveals his was a life of abundance. He woke up each day in a bedroom crammed with awesome things, including exquisite small boxes by Russian jeweller Peter Carl Faberge (1846-1920).

Opening night attendees were enabled by Mr Keating’s fine words to reflect upon the relationship we all have to beauty both man made and natural, the aesthetics of design and the sheer pleasure such a display of decorative arts can offer the onlooker

A collector himself in a smaller period span in European history, Mr Keating eloquently discussed with great knowledge that period of enlightenment in Europe represented by the David Roche collection, when many of the values and freedoms we enjoy today were both established and confirmed. Throughout his lifetime from his teenage years onward David Roche actively sought to secure wonderful works. As he grew older and learned a great deal more he kept upgrading to secure works with an even greater aristocratic and sometimes royal provenance, all made of materials of superb quality and exquisite craftsmanship.

The majority of his some 3500+ items come from a period when the Rococo and Neo-classic design styles were preferred.

They span most of the eighteenth century, flowing over into the early nineteenth century during the Regency and reign of King George IV in England and the Empire of Emperor Napoleon 1 of France

Paul Keating reinforced how important it is that such an informed and superbly chosen collection is available for design students and artists looking to make they’re careers in many different aspects of today’s creative world.

He pointed out that putting such a collection of wondrous objects together again would not be possible today because so many works from the period David Roche collected in have over the last thirty years, disappeared into major museums or private collections around the world. Students of design in furniture would do well to start with the fabulous centre table or Guéridon in the gallery featuring works from the neoclassical period in history, whose pictorial mosaic work forms the logo of the trust Mr Roche set up in 1999.

The marvellous micro-mosaic of the young Roman God of the grape Bacchus crafted by Clemente Ciuli sits splendidly atop a superbly ormolu decorated tripod base made of mahogany. 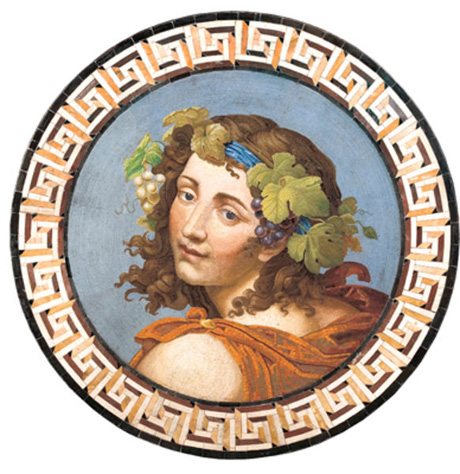 It is inspired by the designs of architects to Napoleon and Josephine, Charles Percier and Pierre Leonard Fontaine, inventors and major proponents of the rich and grand, consciously archaeological versions of early nineteenth century architecture in France now known as Directoire and Empire styles. The base has been attributed to being made by France’s great ebeniste of his day Jacob Desmalter (1770 – 1841).

He was active during the time when a greater interest in the classical styles of Greece and Rome had followed on from the popularity of the Grand Tour.

This was when wealthy young English gentlemen were sent abroad accompanied by a tutor or companion to ideally ‘breathe the classical air’ as indeed did David Roche, he loved this period in history. In the same room is another tripod based smaller table with an inlaid top of pietra dura (hardstone), attributed to George Bullock (1782 or 3- 1818) England’s most proficient craftsman for a technique perfected by an earlier French ebeniste Charles Andre -Boulle (1642-1732), that of inlaying brass into timber, which is also a rare jewel. George Bullock began as a sculptor in Liverpool moving to London in 1813 where he established an extensive furniture workshop, specialising in massive pieces making frequent use of classical motifs such as the fret, palmette and anthemion,

He took pride in deriving others from British flora, the leaves of oak, ivy, harebells, pimpernels etc.

He used British native timbers including oak and holly with inlays of elm, larch sometimes combined with Mona marble from Anglesey, his nationalism much praised by his contemporaries.

This was a period that loved exotic and strongly figured woods such as mahogany, rosewood and zebra wood and Le Gaigneur excelled at crafting furniture with inlayed brass in intricate designs.

Interestingly it also features another contemporary of its time, a scagliola or faux marble top.

This came about when real marble from Italy was unavailable due to blockades on trade imposed during the Napoleonic wars. For students of design this is very special, because it’s so rare to find a contemporary finished product like this still intact to-day as later owners would have very likely replaced it with real and very costly marble as it came to hand, to reflect their own status in ‘high society’.

Le Gaigneur’s shop was called The Buhl Manufactory, and could be found at No. 19 Queen Street, on the east side of the Edgware Road in London. He described himself as a ‘metal bust maker’ so it is thought he may have also made his own gilded bronze mounts. His clients included the Prince of Wales (later George IV) and Lord Yarmouth, later 3rd Marquess of Hertford. When you pursue your passions in life as David Roche was enabled to do through his wealth, it can become contagious, almost religious really, and a great deal of the enjoyment for him was in the chase.

In recent years he spent a great deal of time in St. Petersburg so the grand malachite urn containing his ashes, sited next to a portrait of David as a young man and the house museum’s new Russian room recently fitted out to his instructions following his death, are all very appropriate.

He would be enjoy to know that he has become an integral part of his own collection.

One of his prize possessions is the cut and etched crystal glass vase with gilt bronze mounts, now in the house drawing room, which is similar to some in the collection of the Russian museum in St Petersburg.

David’s wacky and quite wonderful kitchen collection in his house was all about his own amusement and it doesn’t matter how many times I see it, the 3D nineteenth century ‘butcher’s shop’ installed over his stove, always causes me to smile. The collection’s Senior Curator Robert Reason foresees programs in the all-new gallery space as not only presenting period thematic sections in future, but also showcasing new work by contemporary artists and designers inspired by what is at hand.

It was very pleasing for me to be there assisting in the days leading up to the opening. I could only think that when viewing the results of all those who supported his vision, how very pleased David would have been. The David Roche House Museum & Gallery is a very fitting legacy and an important and powerful expression of the evolution of our culture.