The National Trust of Australia (Victoria) is having a great success with showing off great gowns in their heritage houses.

Now they have a new coup, as in association with Film Art Media, they present the divine costume made for the award winning Australian film The Dressmaker by designer Marion Boyce, hot on the heels of the release of this exceedingly popular Australian movie.

The Dressmaker (2015) an Australian film directed by Jocelyn Moorehouse, featured actress Kate Winslet as Tilly Dunnage and the ladies of the town of Dungatar fabulously frocked up in garments to knock your socks off.

It also includes some of the costume designed by Margot Wilson for Kate Winslet starring as the exceedingly glamorous Tilly (Myrtle), who has returned home to the town where she was born and left under a cloud as a ten year old child.

Now on show at the National Trust’s stunning Barwon Park Mansion in countryside Victoria, are some 50 haute couture gowns from the film, inspired by the 50’s designs of Christian Dior.  It reveals how the costumes were made and is open from Wednesday to Sunday from 11 December 2015 to 11 March 2016. Tilly is a beautiful young woman who wants to right the wrongs of her past, which were brought about by gossiping and keeping secrets.

She is out to prove that a dress really can change everything as she explores her future possibilities.

Fate has determined that Tilly, who has a passion for fabulous fabrics, has honed her own personal design and style under the direction of one of the great French couturiers of the 20th century, Madeleine Vionnet at Paris.

Described as an “architect among dressmakers”, Vionnet wove her own particular form of magic around a woman’s natural shape with modish elegance the ultimate aim.

Till’s style, as indeed would her name, becomes a byword in Dungatar for those ‘… who have already taken possession of their future‘ and believe that less is more.

Celebrating fashion and the Australian outback together, the costumes are on display at the National Trust of Victoria‘s Barwon Park, a 42-room bluestone mansion, set in a sweeping rural landscape at Winchelsea. To succeed Tilly must first reconcile with her cantankerous, eccentric mother, an award winning role by Judy Davis.

She also has to transform all the women of the town from looking tired and worn down into a bevvy of fashion models, floating around in the dust looking as if they had stepped out of Vogue Paris.

Sarah Snook as her former classmate Gertrude Trudy Pratt is a definite challenge.

She is looking frumpy, tired and worn out.

“Watch and learn Gertrude”, Tilly says and then helps the ugly duckling to be reborn as a swan.

Tilly Dunnage sets out to dazzle all the local boys on the football field, giving everyone a lesson in the power of perceptions that can be created by wearing a fabulous frock with confidence.

Tilly doesn’t plan on falling in love when she arrives, especially with the good-looking and very kind charmer Teddy (Liam Hemsworth). But there it is life doesn’t always proceed to plan. If one is going to carry out sweet acts of revenge on people who have hurt you beyond belief when you were a child, why not do it using a Singer sewing machine while looking stylish wearing Parisian Haute Couture.

Based on the best-selling novel by Rosalie Ham, The Dressmaker is a bittersweet, comedy-drama set in early 1950s Australia when Christian Dior was inspiring women around the world after all the years of sadness and neglect of their looks, to embrace a whole new ‘look’ for ladies. 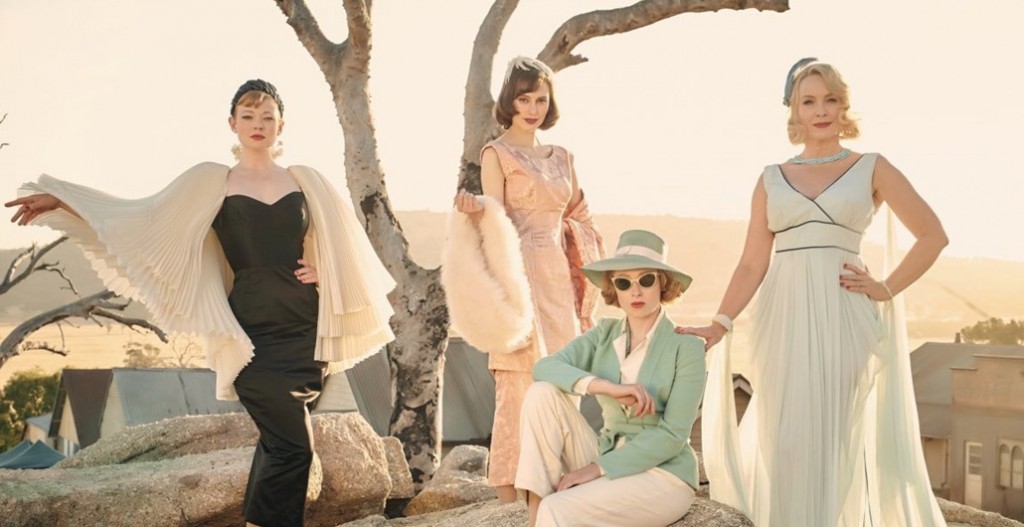 And what a look it was!

Glamour plus, jewel like colours contrasting with the earthy tones of the Australian bush, blues, reds, mustard yellow and green made from silks, satins, beautiful brocades, form fitting brilliance all magical properties of Tilly’s great gowns.

All sorts of special events are planned, including a garden party where visitors are asked to dress in their Sunday 1950’s best, afternoon tea in the mansion and a guided tour of the show with the curator.

Well worth a trip to the countryside of rural Victoria.

Rose Niland reviews Four Places at Out House Theatre Co, a compelling narrative of a family disintegrating under the pressures of mistrust and misunderstanding