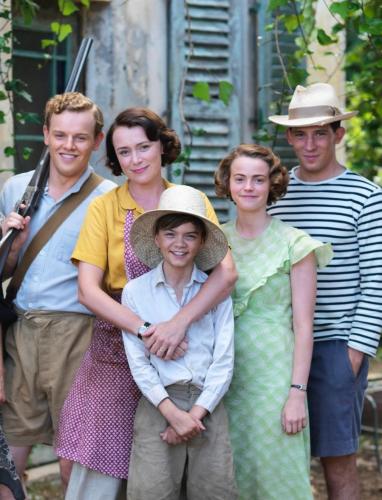 The Durrells is a new six-part poignant iTV series based on the true-life stories ‘My Family and Other Animals’, ‘Birds, Beasts and Relatives’ and ‘The Garden of the Gods’.

Penned by author and naturalist Gerald Durrell (1925-1995) it is all about his somewhat eccentric family and an important chapter in their life when they spent some four blissful years living on the ravishing UNESCO World Heritage listed Greek island of Corfu, 1935-1939.

Endless sunny days writing, wild life gathering, hunting, shooting, painting and learning, while being loved, quarrelling and making up must have been hard to take.

Having to leave when World War II finally broke out, devastating.

The Durrells looks all set to be another winner in the drama stakes, at least according to our London correspondent, who has reported Episode 1 a total delight.

Full of warmth and fun in the sun, The Durrells inspires a desire for us all to relocate immediately to Corfu.

It is such a picturesque place where life is lived in a shabbily chic two-storey house on a hill with faded ice blue shutters looking out over the crystal clear waters of the Ionian Sea. It must have been a truly golden time.

Although we cannot just forget the fact that when The Durrell’s were there in the 30’s electricity hadn’t arrived on the island and the only dunny was out the back ensuring that Aussies would have felt right at home.

Good to see Keeley Hawes, who came to fame in Spooks, featuring as the long suffering widow Louisa Durrell matriarch of her family and dedicated to her children. She’s great.

Since their father died they have been free to `do their own thing’, long before the expression came into vogue.

Josh O’Conner plays her eldest child Larry (later famous literary giant Lawrence Durrell (1912-1990)) who once wrote ‘There are only three things to be done with a woman. You can love her, suffer for her, or turn her into literature’.

Larry would like to find her a man, at least to use for sex and so he gets busy trying to organise it.

The first candidate couldn’t be more crass if he tried.

He spent much of  his youth in boarding school during the time his parents with his siblings were living in India, his mother relocating back to London when his father died.

When we meet him he’s a real estate agent not really earning any money at his profession to help his mother out. Yorgos Karamihos as Theo in The Durrells, courtesy iTV

She has debts mounting up and so he suggests they sell up and move to Corfu, where life is much cheaper. And so she decides to be decisive and agrees and so they literally pack their bags and go.

It is wonderful the producers have cast Greek actors to take on the Greek roles… how novel.

Alexis Georgoulis, hugely popular in Greece is the likeable Spiro Hakaiopulos, the local taxi driver. He’s also a bit of a darling, who negotiates the crumbling rental on the picturesque house on the hill for them all, casting himself willingly in the role of a general Mr Fixit.

Yorgos Karamihos plays the handsome intelligent Dr Theodore Stephanides, who teaches Gerald about the local wildlife and inspires his life’s work to help to rescue animals from the brink of extinction.

In the first episode Louisa has a showdown with, and is patronised by her youngest son’s headmaster, who unfortunately calls her ‘dear’.

She has been summoned to the school because Gerald has been caned for skipping class, preferring to feed the rats behind the cricket pavilion rather than go to class where he is constantly bullied for being ‘different’.

She informs the headmaster about Gerald’s predicament but there’s not a trace of sympathy or empathy. So she calls him among other things, a moron, a very gutsy move in the 30’s for a woman accustomed as they were to being patronised and exploited. A mother of three sons myself, I must say unlike her I would have likely decked him too. It was certainly not hard to feel like cheering as she led Gerald by the hand out the door forever to be home tutored and to spend precious time in the Greek islands. What a wonderful place to gain a real education. Callum Woodhouse plays Leslie the middle brother. He dabbled in many things, including carrying guns and shooting anything in sight. He had a life that didn’t really quite workout as he would have liked, despite living in the hunter’s paradise of Kenya for a time.

Milo Parker as Gerald Durrell in The Durrells, courtesy iTV

Gerald is mad about nature, collecting, keeping and conserving endangered animals when we meet him. Tortoises, pelicans, field mice, all come to live at home while he studies them

He would go on to found a zoo on the island of Jersey that still exists today – The Durrell Wildlife Conservation Trust.

It was Gerald, not his brother Lawrence who had much loftier ideals, that wrote the appealing books, which formed the basis for this series Simon Nye has adapted for the silver screen Daisy Waterstone as Margot in The Durrells, courtesy iTV

Daisy Waterstone is Margo (1920 – 2007) the sister who fell in love with Greece and periodically returned, forced home with her then husband, back to England during the war.

She later independently ran a boarding house in Bournemouth and her brother Gerald started his zoo in her backyard and garage. Alexis Georgoulis as Spiro in The Durrells, courtesy iTV

Corfu and their house’s nod to Bohemianism really appealed to The Durrell’s and in later life the four precious years spent on Corfu never really faded in their family’s memories.

This is looking like another special event drama series, spirited and freshly reimagined from Gerald’s original novels, it dazzles like a ray of sunshine. A Greek idyll, The Durrells on Corfu, courtesy iTV

It will be interesting to travel with The Durrells on their own unique journey full of nostalgia, with superb locations and high good humour.

Aphrodite, Adonis, Apollo, Artemis…are about ennoblement of form in Ancient Greece. Its visual remains, its architecture, ceramics, and most especially the statues of male and female bodies are for many aesthetically beautiful. But how can so many things be beautiful in Ancient Greece when they are entirely dissimilar? Is beauty…