The Durrells is an iTV Television Series telling the tale of a self-absorbed English family who are trying to live an entitled life in a rented house overlooking the sparkling waters of the Ionian sea on the ravishing UNESCO World Heritage listed Greek island of Corfu 1935-1939. It’s certainly a great infomercial for the island, which beckons to us all to experience its many charms first hand.

In Series Two Episode One the Durrell family, consisting of widowed Louisa Durrell (Keeley Hawes), her eldest son, the author Lawrence Durrell (Josh O’Connor), his layabout brother Leslie (Callum Woodhouse), their dizzy sister Margo (Daisy Waterstone) and passionate youngest brother nature loving Gerald (Milo Parker), age 14, have got to the point of being spectacularly poor. As they have never had to earn money to live, they find the whole concept more than challenging. 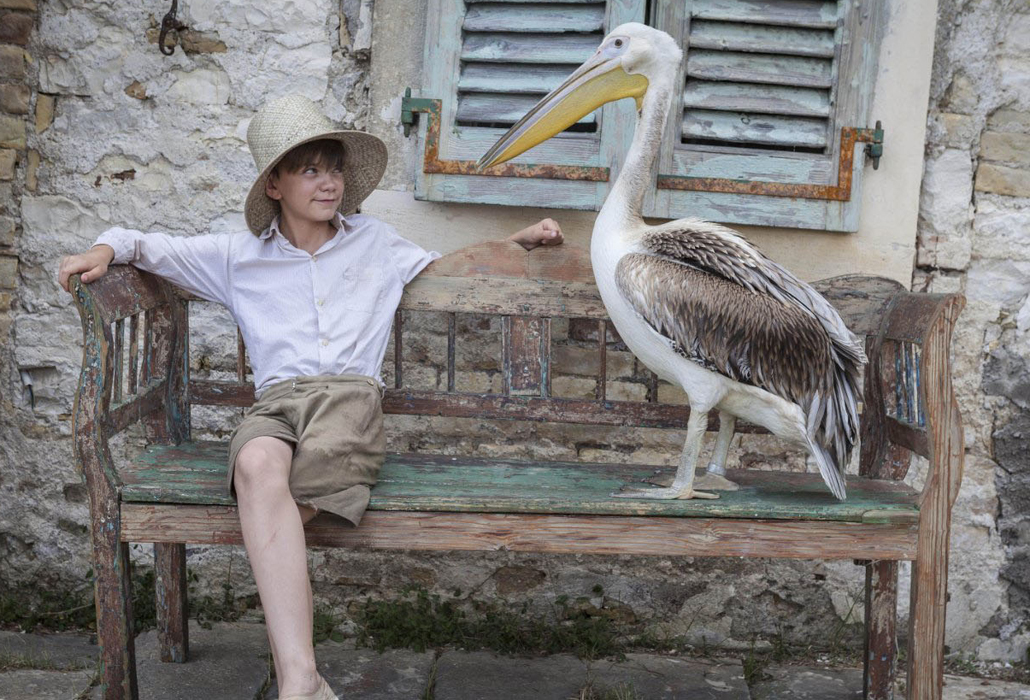 Milo Parker as Gerald Durrell in Durrells 2 in The Durrells, courtesy iTV

It was the youngest, Gerald Durrell when he grew up, who wrote the four appealing books, which form the basis for the television series that Simon Nye has adapted tongue in cheek for the silver screen as family friendly escapism.

Greek actors take on Greek roles, with Alexis Georgoulis as Spiro Hakaiopulos, the local taxi driver who initially negotiated the crumbling picturesque house on the hill they rent and have all become attached to, casting himself willingly in the role of a general Mr Fixit for their problems large and small.

Don’t Read Any More if you Don’t Want Spoilers.

Callum Woodhouse as Leslie and Keeley Hawes as Louisa in The Durrells, courtesy iTV

Louisa has a new not very nice haughty landlady who has a reputation for being fierce and for poisoning people she doesn’t like. Although the rash of food poisoning among the men of the local village has been attributed to Louisa’s latest venture in trying to make money, selling English produce at the market.

Set just before World War II when electricity hadn’t yet arrived on the island, a batch of Scotch Eggs, which have always require refrigeration, was not a wise choice for her to make and sell on a hot day. Callum Woodhouse as Leslie and Keeley Hawes as Louisa in The Durrells, courtesy iTV

Spiro has been away and when he returns he lends his advice on their market stall. He ties a scarf on her head Greek widow style and smears dirt on her face because as he tells her, all Greeks think foreigners are clean and rich. He also moves her and the stall to a busier part of the market, suggesting she must use sex to sell

Not daunted by early failure, Louisa keeps coming back for more.

Spirited and reimagined from Gerald’s original novels, there is a lot going on in Episode One of Series Two when we hears goats baying to announce the arrival of the day, although Louisa is not so sure she wants it to be in her bedroom, and on her bed.

Downstairs for breakfast there is only a small loaf of bread to feed five and they are out of hard cold cash. When Louisa comes up with an idea to make money by selling English food to the Greeks, the others are not too enthusiastic and we understand it is sure to be a disaster.

She must gather her British fortitude and she alarmingly takes her rather thick son Larry along to help. It’s as we expect it to be, a total disaster, neither has a clue about what it requires to sell wares.

When she arrives home from the market she finds her landlady sitting in her kitchen…. she starts removing the furniture from the house and won’t return it until Louisa catches up with her rent. Gerry is as always completely beguiled by nature and in this episode he comes across his first otter, a rare creature in this part of the world, and when his example is killed he wants to start a breeding program. He again enlists his older friend Dr Theodore Stephanides (Yorgos Karamihos) to help. He is the one who has taught Gerald about the local wildlife and together they both set out to find and capture a pair of otters. Daniel Lapaine as Hugh, in The Durrells, courtesy iTV

Hugh Jarvis is an Englishman working on the island crushing olives and making olive oil. Louisa on first introduction puts him off as she does everyone who tries to get close to her. Embarrassed by his wanting to draw her out about who she is, he doesn’t stop until she tells him she’s a widow. In Series One Margot befriended a local Greek monk (Nick Orestis Chaniotakis) a kind and generous soul whom she naively doesn’t’ understand has taken a vow of celibacy.

Daisy Waterstone as Margot in The Durrells, courtesy iTV

When she finds out in Episode One of this second series, she takes a decision to become a Nun, which is sure to add some even lighter moments to the madcap story of this misfit family of people.

One of the things they try in this is beekeeping and Leslie ends up in the sea trying to escape an attack. When he returns home he finds Margot and when showing her how the ‘safety’ works on his gun, he accidently shoots Roger Gerald’s dog with his gun. He takes it to the local Dr hoping he can keep it all a secret. Fat chance.

Lawrence meanwhile has gone off to harangue the landlady who is giving his mother a bad time, seriously making a fool of himself. Louisa goes to visit her local mysterious English milordi Hugh (Daniel Lapaine), who has invited her to enjoy  champagne and canapés on the terrace.

He has a musician singing and playing a guitar endeavouring to set a romantic scene when she finds out he is the reason her Greek landlady is so hostile towards her…, so she ups and leaves.

Arriving home she finds the house full of crazy angry people. The rumour is she has poisoned a great many people so she must give everyone their money back, having to now borrow to pay her back rent on time. Will she ever learn?

Josh O’Connor as Lawrence Durrell in The Durrells, courtesy iTV

Lawrence trying to finish his first book finds everywhere he goes with his typewriter he is told to be quiet. After dispatching it, a few morning’s later he finds himself observing his families latest drama and ensuing chaos and suddenly has a light bulb moment, realising they should be the subject for his next book.

The Durrells as before spend sunny days writing, wild life gathering, hunting, shooting, painting and learning, while being loved, quarrelling and making up. They did have to leave when World War II finally broke out, which is still a way off it seems. Keeley Hawes and her peers are all very definitely enjoying their time working on sun-drenched island of Corfu while making this season of silliness. She does have a great aptitude for comedy which makes The Durrells all the more delightful.

The ensemble cast all work well together, while remaining true to the spirit of the tale. The Durrells ridicule both the locals and Corfu’s imported English eccentrics. so Series Two is sure to beguile its growing band of followers, and confirm its place as one of iTV’s favourite shows.

Visit the Australian Museum, Sydney to view the stunning exhibition about the AZTECS – Access the Mystery the Empire and Admire the Art, on until January, 2015