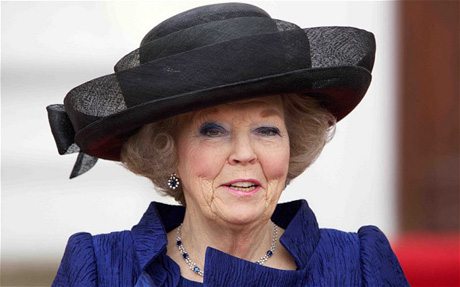 A story of Dutch ingenuity, industriousness, honour and courage is one I grew up with, the story of Hans Brinker, or the Silver Skates, the tale of the boy who plugs a dike with his finger. He stays there all night, despite nearly freezing to death, until he’s found by the adults of his village who make the necessary repairs to save them from the north sea invading their land. Interestingly it is a tale not as well known in Holland as it is in other parts of the world, where it is also a story illustrating their strength of character; their famous fortitude and resilience, especially in times of adversity.

At Amsterdam on Tuesday April 30th 2013 an event took place that had great significance for the Dutch people on the international stage. Royals traveled from all corners of the globe to witness the swearing in of The Netherlands’ first king in 123 years. To achieve this his mother, Queen Beatrix who had proved popular with the people, abdicated her throne on her official 75th birthday. This act paved the way for her eldest son to take on his new royal responsibilities. King Willem-Alexander thanked his mother for “33 moving and interesting years“, saying he and the public and people in Dutch overseas territories were “intensely grateful” to her.

Historically we would certainly have to say the Dutch are a very savvy, smart group of people. For centuries now they have been at the cutting edge of both cultural and social development, as well as financially successful. This is for a country that although it may be small in relative size to many others, is perhaps larger than everyone in attitude and, in so many other ways. The Dutch people look to their royals as symbols of unity in times of turmoil or political division. King Willem-Alexander and Queen Maxima of The Netherlands

In May 2011, the Netherlands was ranked as one of the “happiest” countries in the world, according to results published by the OECD that promote policies that will improve the economic and social well-being of people around the world. The Dutch it seems have become masters at getting the details right. That includes leadership and the way they handle their monarchy. No one has begrudged Beatrix her right to step down, after losing her beloved husband and the dreadful accident of her second son last year that left him in a coma, from which he is still to awake.

At the beginning of the seventeenth century while a great deal of the rest of Europe was being torn apart by wars and strife, the United Netherlands emerged in the area known as the Low Countries (Belgium Holland Luxembourg) and became the wealthiest in Europe, its trading ports of Antwerp and later in the century, Amsterdam, the banking and commercial centres of Europe and a major link with the far east.

By 1683 the revenue of France was four times that of England and ten times that of the Venetian republic, although Holland was still the richest and most envied by all in the whole of Europe. France’s King Louis XIV’s 1st Minister Jean-Baptiste Colbert was working hard to create a balance of trade and to build a strong economy, which was not helped by the King’s excessive spending on wars. He became entirely obsessed by this tiny country and its prosperity, most of which came through commerce, banking, insurance, printing and seafaring.

Gradually the Dutch became a close knit community of solid, commonplace people, prepared to support a society in which corporate effort for the public good was rewarded with a booming economy and a life that was both rich and full. Over the centuries since the Dutch became a people, whose wealthy successful merchants provided a climate that allowed their bourgeouise to dictate fashion, their royal rulers always respecting their views.

Allowed to feel proud and self-assured under the leadership of rulers of the House of Orange, the monarchy has enjoyed the people’s admiration and remained a great success. Having great fun millions of people dressed in ‘orange’ for the event and orange food abounded; the colour now traditionally a source of national pride.

They turned out in their millions to celebrate the happy event. The new King was reported as saying “I am taking the job at a time when many in the kingdom feel vulnerable and uncertain,” Willem-Alexander said. “Vulnerable in their work or health. Uncertain about their income or home environment.”

At 46, King Willem-Alexander is the youngest monarch in Europe and, like his mother before him, has assumed the throne at a time of social and economic difficulties, which gives him a lot of challenges to work with in order to assist his people. Dutch kings and queens are inaugurated into their role as head of the royal family, not crowned. This different approach to kingship reflects a modern approach, as they promise to serve and uphold the country’s constitution.

The Dutch monarchy today is largely ceremonial, but the new King immediately set out to stake his claim on a course to preserve its relevance well into the 21st century.

“I want to establish ties, make connections and exemplify what unites us, the Dutch people,” he said during a nationally televised investiture ceremony. During this swearing in ceremony to uphold the Dutch constitution, the new Queen Maxima was a vision in a rich cobalt blue gown and cape, along with her children and the former Queen, who also wore the same right royal blue. This was held in Amsterdam’s 600-year-old Nieuwe Kerk (New Church), which has been decommissioned, and held before the combined houses of the Dutch parliament and 2,000 visitors. “As king”, he said “I can strengthen the bond of mutual trust between the people and their government, maintain our democracy and serve the public interest.”

Here in Australia news about the event was indeed hard to find, even on SBS! Is it because it was all about monarchy, which is still a subject in the great scheme of things, one we tend to shy away from? The Dutch historically have shown us all that it is only by confronting challenges head on and making big and often very hard decisions for the greater good, that we can all continue to prosper. Their retention of the monarchy has so many positive aspects, from their point of view, that celebrates all that is good in humanity.

During the past decade The Queen of England, and Australia, whose rank was subjected to great scrutiny from the 60’s – 80’s, has become recognized as a brilliant role model for society by other leaders around the world. Everyone has developed a great affection for her unfailing ability to handle crisis and has felt and empathized with all her struggles, especially about what is right or wrong to share with other people both personally and publicly. Whether or not that connection will flow over to Prince Charles and Camilla, Duchess of Cornwell remains to be seen.

Celebrating her own 60 years as monarch last year Queen Elizabeth is now perhaps seen in a much more positive light, quite simply because she allows us to all share her humanity, which we have discovered, just like all the rest of us is not perfect.

Politician Tony Abbot perhaps summed it up best when he stated on 21 October 2011, “Your Majesty, while 11 prime ministers and no less than 17 opposition leaders have come and gone, for 60 years you have been a presence in our national story and given the vagaries of public life, I’m confident that this will not be the final tally of the politicians that you have outlasted.”

In the United Kingdom Queen Elizabeth has religious titles and she will hold her role until she is no longer able. The only difference with the Dutch monarchy is that is more or less a government job – but hereditary.

As head of state, the Dutch King or Queen falls under the influence of the Prime Minister and there is nothing to stop them from abdicating as Beatrix, her mother Queen Juliana, and her mother Queen Wilhelmina did before her. The King is more accessible to his people; he has already skated a 200 km contest along frozen canals and he ran in the New York City marathon in 1992. He has also been a member of the International Olympic committee. 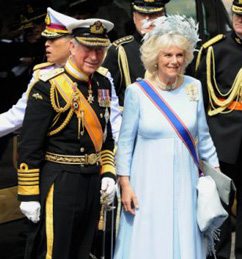 Queen Elizabeth II duly sent her son Charles, Prince of Wales and his wife the Duchess of Cornwell to represent her and witness the swearing in at Amsterdam. 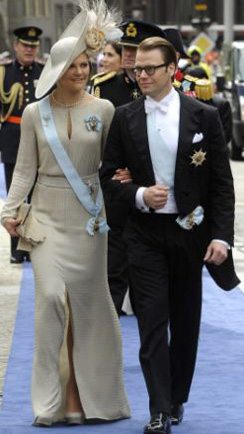 The contingent of Royals in attendance boasted a mix of would-be kings and queens from a variety of cultures, including former Aussie ‘Crown Princess Mary’ of Denmark and her husband Crown Prince Frederik and Sweden’s Crown Princess Victoria and Prince Daniel.

Other dignitaries came from around the world representing various democracies.

The USA and the Netherlands share the same democratic goals of free speech and self-government. Their ties and the relationship go very deep.

It was Dutch traders in 1614 that established New Amsterdam, now New York City. They also bailed out the rebellious Americans from bankruptcy, granting the U.S. diplomatic recognition in 1782, a year before the British signed the Treaty of Paris that ended the Revolutionary War.

The women in attendance certainly did commerce and many merchants proud, resplendent in finery from some of the greatest fashion houses of Europe. It was indeed a glamorous gathering as Arab Sheiks and Monarchs from tiny principalities posed alongside the Japanese royals.

They all posed together in a monumental photograph with the new King, his beautiful Queen Maxima and their three daughters, the eldest of which Amalia is next in line. Afterwards as would be appropriate in a city of canals, there was a great water pageant to celebrate the inauguration.

King Willem Alexander and his family with warm capes covering their dresses, braved a chilly April wind to wave to the crowd during a great flotilla parade as Dutch airforce planes flew overhead in a royal salute.

Then it was time to party and Dutch violinist Andre Rieu and his orchestra entertained the crowds as they all went ‘orange’ crazy. Australian born artist Mirusia, who is of Dutch descent, sang Time to Say Goodbye to Queen Beatrix wearing a very rich blue gown and, she did us proud. André Rieu was invited to arrange a brand new waltz medley, The Coronation Waltz – a Waltz for the King by the King of the Waltz and it was performed live on Museum Square with the fabulous Rijksmuseum as a backdrop during the King’s Ball.

King Willem-Alexander said he wants to “be a king that can bring society together, representative and encouraging in the 21st Century”. He has also said he does not expect to be called “his majesty,” saying instead people can “address me as they wish”. He has reached that ideal state; a first among equals.