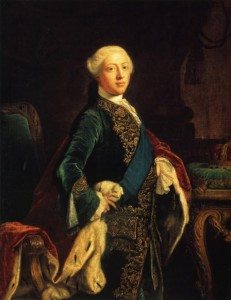 The paradox of King George III (1738-1820) of England’s life is that it was only in madness that he won the affection and admiration of the country that his private qualities had long deserved. His first breakdown had been in 1765 but the collapse of 1788 was the most serious and ushered in the twilight decades that resulted after years of political and medical wrangle, in the establishment of a Regency in 1811. Queen Charlotte presented George III with fifteen children, six daughters and nine sons. He was so devoted to his daughters he did not want them to marry and there were bitter complaints from what they called ‘The Nunnery’. Three of them did eventually marry. Charlotte became Queen of Wurtemberg, Elizabeth the Princess of Hesse-Homburg and Mary the wife of the second Duke of Gloucester. Princess Mary is the eldest of these three of the youngest girls, standing at the left shaking her tambourine to amuse her baby sister, their father’s favourite and the prettiest, Princess Amelia. Princess Sophia is sitting in the little carriage. They were recorded together by John Singleton Copley in 1785 in this truly delightful and well observed painting of an affectionate childhood spent together now in the Royal Collection at Windsor Castle. They are playing beneath a vine-covered arbour with parrots picking at grapes above them; in the distance the Round Tower of Windsor Castle is visible in the evening landscape.