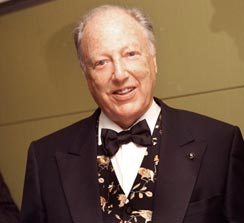 Leslie Walford AM (1927-2012) was always a man in Vogue. Throughout my lifetime he was one of the most influential figures in the world of interior design in Australia. His appreciation for aesthetics and love for design was supported by a prodigious knowledge gleaned studying economics, philosophy and politics before he undertook a three-year design course at Paris. In his day, and in mine as well, interior design courses as such did not exist in Australia, there being only a one year Diploma Course in Interior Decoration available at Sydney when I was studying during the 60’s. Long will I remember visiting and enjoying time with Mr Walford at his fabulous Double Bay penthouse atop one of the smartest ‘Art Deco’ apartments in town. It proved his undeniable ability to mix what he liked with what he wanted and what came to him through the wonderful world of antiques. 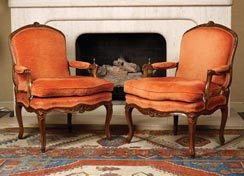 In a lot of ways Leslie Walford got the ball rolling in creating a ‘fashion’ for antiques in Australia, astutely collecting French antiques long before everyone else and purchasing many of them for literally a song. However it was not about just collecting objects. For Leslie it was the passion he attached to a pursuit of excellence in all things, which was entirely infectious and he had a great deal of influence on many young aspiring interior designers, of which I was one. 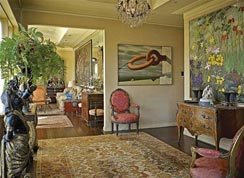 It was very sad to hear of his passing earlier this year, it heralded the end of a great era in bringing interior design to the sort of prominence it now enjoys in Australia. He was not fond of minimalism as he believed the interior of someone’s home should reflect their own life and its story. Leslie Walford’s collection of furniture and objects was dispersed by Mossgreen Auctions from South Yarra in Victoria on Sunday 18th November 2012 at Sydney. Lot 243 A fine pair of Louis XV carved walnut fauteuil, signed Blanchard, French, 18th century 98 x 72 cm Result inc. BP was $26,840.00. The pre-sale low estimate for the collection was $290,870 and the final result (inc. BP) was $541,429.00.  Click here to go to the auction results online.