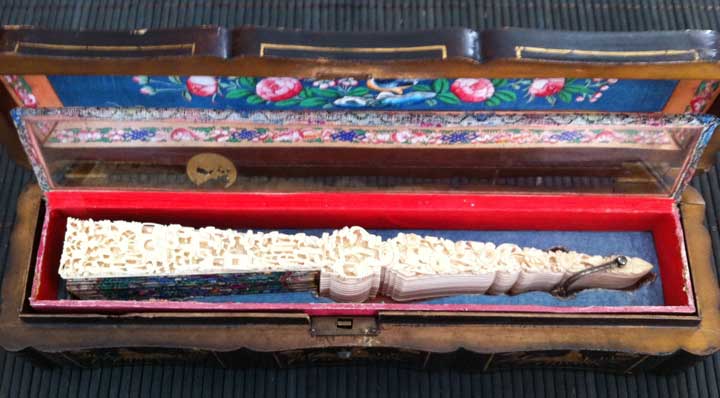 In an elegant black box with gold applied lacquer decoration in the Chinoiserie taste, lies a lovely mid nineteenth century China Trade fan. Its delicate ivory sticks hold up a thick paper pleated fan, which is decorated with hundreds of tiny colourful Chinese figures set in a beautiful landscape.

A gilded band at the top and bottom of the fan on both sides highlights sensational imagery. A great gathering of people, revealed in costume painted using primary colours, are celebrating inside a pavilion, what appears to be a special occasion, with some of them bearing gifts.

On the other side hundreds more people are disposed in a landscape, with what appears to be a group on stage performing. They are all dressed in their best robes for the event. In the outdoor scene many are carrying fans of their own. The scenes are both hand rendered, with wonderful attention to detail.

Each single face has had its features hand painted onto tiny shards of porcelain that have been shaped to suit each single image and then applied onto the paper. Incredibly all of the faces are different. 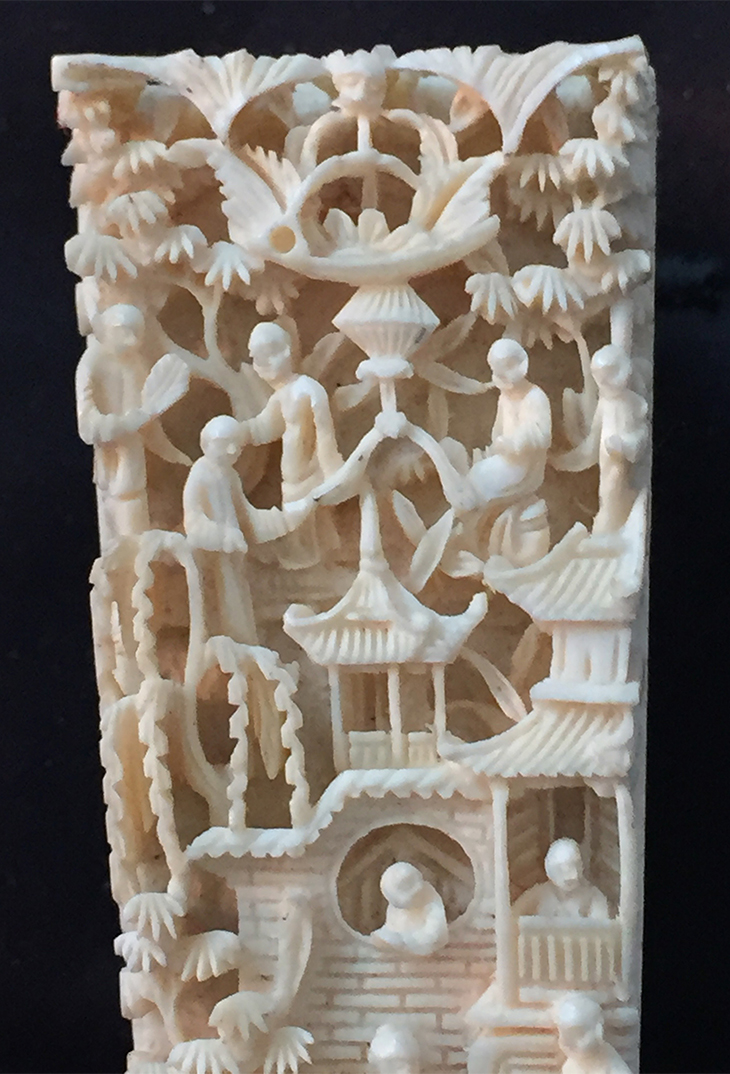 The delicate ivory sticks supporting the fan are finely pierced and have sculptural figures and floral emblems applied.

When the fan is folded shut the outer two sticks protecting the fan are deeply carved, with people inside and outside pavilions where perfectly placed peony’s and sinuous trails of flora unite the images.

It is a stunning object, a wonderful example of Chinese export ware when the China trade was reaching its height in the nineteenth century.

Today, people tend to think of fans as fragile, frivolous accessories in the main wielded by women.

When I lived in the precinct of St John’s Cathedral at Brisbane (2000-2005), on hot summer mornings at Mass that was certainly the case.

At this time paper fans purchased in Chinatown at Fortitude Valley were having a great revival because the dry heat of a decade long drought in progress, was absorbed into the cathedral stonework and turned the cathedral into a giant Gothic Revival sauna on summer days.

Sometimes it was hard to hear the service over the continual fluttering of fans in full flight. Historically the origin of a fan was highly practical. Early man employed a palm frond, or other broad based leaves, so that he could give himself some relief from the heat.

He soon found other uses for his discovery and began refining its use. He learned that a fan effectively winnowed grain, which was considered ‘the staff of life” and a symbol of both fertility and the gods’ benevolence.

The fan gradually became prominent in many religious rites, shooing flies from early Romans’ sacrificial offerings or coaxing flames to light up and stay alight, when tended by Egyptian priestesses in shrines built to honour the goddess Isis.

This led to the fan being considered sacred in many ancient cultures, including those of India, China, Egypt, Assyria, Phoenicia, Greece and Rome. Since the Gods were often believed to take human form as rulers, the fan became a regal emblem, as well as a religious one.

It was all about rite and royalty. Chinese emperor Hsian Yuan (circa 2697 BC) reputedly used fans. Marvellous murals painted and carved in tombs in ancient Egypt attest to the importance of fans. In India, fans were fashioned from the “eye” feathers of peacocks’ tails. Because of the bird’s importance in their culture; fans became symbolic of the status and magnificence of the King.

Early Christian priests recognized the many practical uses of fans. This included their use in services. Moving from outdoor or temporary shelters, churches and temples became permanent fixtures with doors and windows. Flies became less of a hindrance to prayer, and their use began to die out sometime during the late Middle Ages. This was when the fan moved from the sacred to the secular and, from the royal to the common. The Portuguese facilitated that move when they were busy establishing trade routes to the East.

One of the many items brought back was a simple folding painted fan. Although folding fans were not unknown in the West, it was all about the romance associated with eastern legends that became particularly appealing.

According to Japanese tradition, a man carrying an injured bat was amazed at the beast’s wings. A fan was about a recreation of that folded wing and became popular in Europe. Fans were also among the earliest imports of the English and Dutch East India Companies. Leading the popularity were the stylish women of the Italian City states.

A brisé fan was made of sticks with no fan leaf and our green silk brisé fan depicted is Italian, dating from about 1620-40, the earliest example in the Victoria and Albert Museum’s collection. 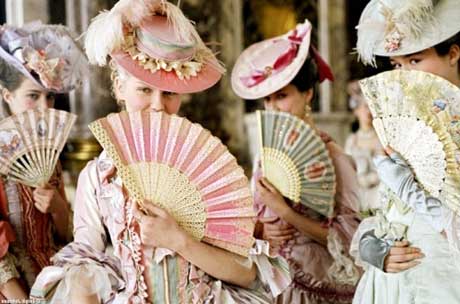 Both brisé fans and fans with folding leaves were popular in the late sixteenth and early seventeenth centuries. Many portraits of this period depict fans held in the hand but very few survived.

Styles spread from Italy, to France and on to England. At the French Court in the eighteenth century fans were used for flirtation expertly; their decoration often became an expose of the times. They perfectly reflected the femininity associated with the rococo spirit and French Mistresses and Consorts of the King of France and their friends used them constantly.

Soon numerous craftsmen were busy fashioning sticks, while printers and artists made the leaves. One of the fans that survive in France has an image of Louis XV and his family at table. The Royal family were not known to eat together at Versailles until the reign of Louis XVI, so its thought that this occasion had to have been a private family affair, where the rules were far more relaxed. Other fans sported maps, riddles, and the latest dances.

The Fan became an integral aspect of a woman’s life during the eighteenth century in England and Europe, their images chronicling events of both the world at large, and those of a more personal nature. When she became betrothed, married, gave birth or, someone much loved died, a woman was often given a fan to mark the event. Around 1796, the invention of lithography, a printing process, made fans available more readily available and more cost effective.

Subjects engraved or painted on fan leaves were not limited to the beautiful or the romantic, but often chronicled current events, such as the launch of the first hot air balloon in 1782, or the French Revolution. Almost every woman who owned fans accessorized them to match or compliment her wardrobe. As dress styles changed, fan styles altered as well. The quality of painting could be very fine.

Carnival scenes at Venice were exceedingly popular from 1702 – 1785. Elisabeth Farnese, the Italian-born Queen of Spain was an avid collector, who would have recognised Harlequin and Columbine. Fan c1750 made by Felicita Tibaldi (1707-77) Watercolour on kid leather with carved and pierceed mother of peral sticks, silvered and gilded courtesy V & A London

They were distinctive characters from the Italian Commedia dell’Arte during the Carnival time at Venice when people flocked there from all over Europe to enjoy the sights, sounds and seduction.

Women of fashion after the French Revolution carried smaller fans. Their popularity was partially due to what critics perceived as a decrease of modesty, but there was also an aesthetic reason: the slim silhouette of an Empire gown would have been at odds with one that was larger. During the 1820’s, machine made lace fans were affordable for almost everyone. London’s Great Exhibition in 1851 introduced the use of artificial ivory onto the scene, which soon ensured that new materials like celluloid and numerous other ivory substitutes quickly followed.

Stronger than ivory and more resistant to breaking or splintering, the substitutes were easier for fan makers to work with. Consequently, few European or American fan sticks after 1870 are real ivory, but instead faux ivory or bone. 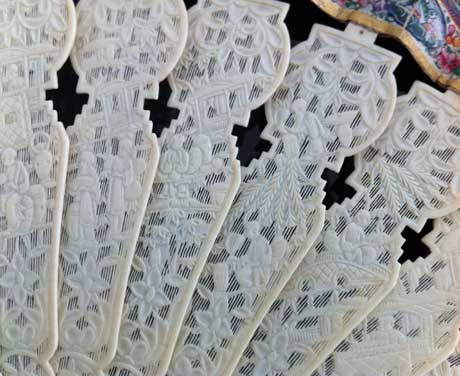 In 1859 M. Alphonse Baude invented a machine to cut and carve sticks.

This new technology also worked well with ivory substitutes, bone, and the lightweight woods imported from the East.

Soon little of the work on fans manufactured in Europe or England or America was done by hand.

The two areas of exception were imported Oriental fans and those painted by artists influenced by Oriental styles. The Chinese did not lose their skill at carving

Commodore Matthew Perry’s opening up of Japan to the West and subsequently, trade in 1854, caused a resurgence of interest in all things Oriental.

This meant once again, Japanese and Chinese fans were admired.

The artist found he had to keep any crucial element of the design from disappearing into a fold.

A fan purchased by an early nineteenth century man making his Grand Tour by visiting Europe’s classical architecture might depict the Bay of Naples and archaeological ruins of Pompeii. Were he still buying during the late Victorian era, he would have found fans whose sticks reflected the sinuous decorations of Art Nouveau. As homes and furniture went through design and style eras from the mid nineteenth century Gothic Revival to the retro Art Deco of the twentieth century, so did fans. Whether machine made or hand painted, fans remained popular until the time when women began voting and working outside their homes.

This meant that their hands were as busy as their lives. They no longer felt comfortable carrying a fan, at other than special occasions. Eventually as technology expanded whirring electric blades and the cool air flowing from air conditioners would replace The Fan and its gentle fluttering.

Fans were highly desired individual objects of the China Trade all over the world prior to World War I (1914-1918).

Hundreds of thousands found their way from the east to the west and there would have only been a few women who did not open a Chinese fan on a hot summer evening, especially at a ball.

They were made of every type of material imaginable, such as sandalwood, ivory, tortoiseshell, mother of pearl, painted paper, painted silks with silver and gold filigree used on the rare and extraordinary.

Mostly adult fans survive, but in the V & A at London there is a rare survival, a young child’s paper fan, just the right size for a young bridesmaid to carry.

It’s accented with gilding and the beautifully painted scene depicts a shepherdess being politely courted by a well dressed gentleman.

In Europe and England for over two centuries a whole language of fans existed and ladies were trained how to use them effectively.

The Language of The Fan gives a whole new meaning to the art of seduction, just learning it must have provided much amusement