The Fencer is a true story based on the life of Endel Nelis the renowned fencing master of Haapsalu, Estonia, who has now become a legend thanks to novelist Anna Heinämaa’s wonderful screenplay, which is beautifully crafted.

The Fencer is a gentle, quiet, although powerful film about what honour truly means; a concept perhaps best described by that wily ancient enigmatic ancient Greek philosopher Socrates (471 BC – 399 BC) who noted… ‘…the shortest and surest way to live with honour in the world is to be in reality what we would appear to be; and if we observe, we shall find, that all human virtues increase and strengthen themselves by the practice of them’.

We all have reasons why one movie will appeal to our sense and sensibility more than another. Some people like big bold statements, fast thrillers and indeed, they have their place

This is not like that, in fact the brilliance of this film is its superbly achieved subtlety; thanks to the outstanding ability of its director and actors both adults and children, who are able to replace a raft of sentences with just one look

I found this thrust and parry element of the film captivating, a master stroke of directing by Klaus Härö who stated the ‘core theme of The Fencer is the role adults play in children’s lives and how they can steer the children in the right direction. How otherwise do people become who they are? Written by Anna Heinämaa, an international production, The Fencer shown in Australia with English subtitles, is full of fine performances. It has great optimism, and was filmed on location in Estonia, Finland and Germany

Producer Kai Nordberg noted its ‘…story is all about people’s universal need to hold onto their freedom and the right of a small country to defend itself against a superior opponent’ makes this film astonishingly current.

I was motivated see this much acclaimed film, because when I was a child Fencing was the one sport I secretly loved and yearned to learn. As I grew up in a family where rugby, swimming and cricket took precedence you can understand my thoughts only once shared were dismissed and so it became a secret obsession instead.

Discovered and admired in books at the Randwick Library in Sydney first, my understanding about Fencing’s ‘romantic’ side was completely reinforced when at 12 years of age I saw Grace Kelly have a Fencing Lesson with Louis Jordan in the film The Swan (1956). To say I was impressed was an understatement. 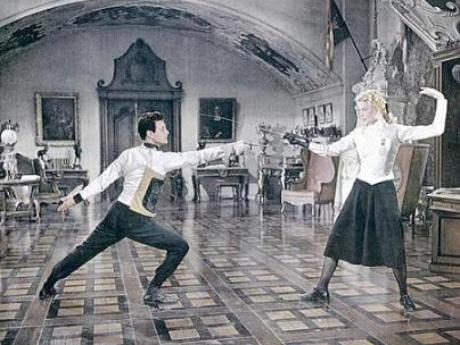 What I saw and admired first was the elegance, the grace and the beauty, then as I looked closely there was the art of restraint, the intelligence and the supreme skill required for anyone to master this truly ‘classy’ sport.

The Fencer Endel Nelis (Märt Avandi) is a man of honour from Estonia, a tiny country on the Baltic Sea, which is next to Latvia, looks across a Gulf of Finland to Finland and has one border with Russia, or the former Soviet Union. It’s the early 1950’s and the children of the village have very little to do to give them hope that life will get better. Estonia was occupied by Nazi Germany during Word War II. On his orders, Hitler had most of its able bodied men drafted into the German army, whether they believed in his ideology or not. Resisting was not an option, not everyone who came under Hitler’s influence had a way to escape as Austrian Captain von Trapp did, over the mountains to Switzerland.

Following the war, the Soviets incorporated Estonia into the USSR under Stalin’s regime, which regarded all of the former soldiers German army criminals, so these men, many of whom were only young like Endel, were totally dammed whichever way they looked. Trying to keep a low profile and under the radar, Endel Nelis in the early 1950’s left Leningrad where he was an accomplished Fencer, who trained with his teacher and friend Aleksei (Kirill Käro).

To escape the secret police he takes his mother’s surname and finds work as a sports teacher in the small seaside town of Haapsalu on the west coast of Estonia. Its gentle quiet nature suits his desire to live a ‘normal’ life.

From the moment the Principal (Hendrik Toompere) of the school finds out his new recruit is a ‘Fencer’ he is suspicious. Such a sport to his mind smacks of ‘elitism’ and ‘aristocratic ways’, certainly not tolerated in Stalin’s socialist regime, which ensured ‘freedom’ was the main thing people lost. Endel Nelis wants to discover how he’s going to engage and interest all the children, many of whom are orphans, in his physical education classes.

He’s disappointed and frustrated by a lack of equipment; basically he has a vaulting box and a few pads.

After finding a whole lot of snow skis in the attic, he sets out to motivate them by establishing a Saturday Sports Club.

He sets to work mending those that are broken, hoping to be ready on time and all the while praying snow will arrive.

While out walking he meets the lovely Kadri (Ursula Ratasepp), also a teacher at the school.

She tells him how happy she is with his plans to give the children a purpose in life because the village is such a quiet place for them all to grow up with very little to inspire or motivate them.

When the big day dawns the snow arrives, along with all the children eager for lessons, only to find that the skis have been confiscated by the Principal, whose actions we can only assume are motivated by jealousy and mistrust.

The children are devastated but thankfully Endel’s not a man to accept such a defeat easily. In a reflective mood he takes out his foil to practice and clear his mind.

Sprung by the lovely Marta (Liisa Koppel), one of his younger students, who is eager to know what it is he is doing when she finds out, she asks if he will teach her how.

He is reluctant at first because he has been advised by Aleksei to keep his head down and not draw attention to himself. However the pressure of the children’s disappointment is overwhelming. Taking the children on a walk down near the sea they help him find branches off trees so that he can make foils for them all. At first he finds the job of teaching enormously difficult as the war and the climate he lives in have made his own ability to communicate with his charges difficult. Now supported personally by Kadri, and pushed over his boundaries by Marta and Jaan his prized pupils, he gradually earns all their respect and finally, their trust.

Fearful of what it all means the Principal has now enlisted his even nastier assistant to actively dig up dirt on Endel as he calls a parents meeting seeking to gain support to stop the Fencing lessons. Jaan’s grandfather (Lembit Ulfsak) puts himself into the spotlight by standing up and speaking out to a point, where all the parents vote to allow the children to keep fencing because they haven’t seen them happy in a long time.

This is not a situation the Principal will take lying down. He writes off to the authorities in Leningrad at about the time the children have discovered a Fencing competition for schools to take place there.

Not knowing about their teacher’s past, they beg him to allow them to compete. His first instinct is to say no, but gradually persuaded that it would be in their best interest, he says yes and picks his best four children to represent the school.

He knows he’s playing into his Principal’s hands, but there it is and when Aleksei who has made a fleeting visit from Leningrad to try to get him to relocate because people are asking questions about him, the dye is cast. Aleksei does not like his decision to remain, nevertheless he sends him two huge crates containing second hand foils, masks and the padded gear for the children to wear, much to their delight.

Honour is everything; living without it for a man of Endel’s stature and intelligence, unthinkable. Especially now when Jaan’s grandfather a well educated man who also defied the Principal at the school meeting, is taken away at night by the Secret Police. Endel and Kadri have formed a special bond, and knowing of his predicament and what the visit may mean for both their futures, she is fearful for his life and her own loss.

Loving him as she does she nevertheless packs sandwiches for he and the children to have on the train, because it is a long journey up the coastline to Leningrad.

When they arrive they find that much more expensive electrified gear is required. The only Estonians in the competition, Endel is frantic until one lovely lady teacher and her girl pupils who are not competing until the next day, lend them theirs. The team perform well against seasoned city opponents and when Jaan is injured near the end of a fight for the gold medal, Marta who is the ‘alternate’ is forced to step in. She wins against an opponent who towers over her, proving size is not what matters in life, but that keeping a cool head and having the courage of your convictions definitely does.

Bittersweet, the children look on as Endel is taken away by Stalin’s heavies. Fortunately he is not there long because Stalin dies, with the result all political prisoners are released. When Endel arrives back in Happsalu Kadri is at the station waiting for him, as are the children who greet him as their friend and father. It’s worth noting the Sports Club Endel Nelis founded there is still operating today.

This is a thought provoking, very special and totally delightful film. In the eighteenth century women usually painted under assumed male names and often their work was re-signed and copied by unscrupulous collectors and dealers.