Certainly no God in any religion I know of would have offered Qin Shihuang first Emperor of China the mandate of heaven he sought, based on the life he lived, one that caused great pain and suffering to others.

In history the first Qin Emperor Shihuang (259 BCE – 210 BCE) has been called a villain, tyrant, vandal, brute, barbarian, despot, hero, revolutionary, activist, saviour, leader and above all, founder of the empire of the Chinese peoples.

The period prior to his reign is called the Warring States period, because it was all about the struggle between the many different and independent states of Chinese peoples wanting to achieve harmony and become a nation.

Shihuang emerged as a victorious leader and was credited with achieving the final unification of China. He did this by ruthlessly executing a severe political agenda, which included abolishing feudal ranks and disarming private individuals who may oppose him. He standardized coinage, weights, measures and writing giving authority to a central government he dictated to. He violently imposed systems that kept everyone in their place and in a pecking order established through rank a  rule through fear, not unconditional love, which our present western system of democracy is founded on.

What we do know from ancient texts and archaeological evidence is there was no harmony at the first Emperor’s court. Everyone lived in fear of their lives and what would happen to them and importantly, to their descendants for eternity, if they did not obey their demonic despot’s wishes.

This latter point goes to the very essence of Chinese culture and its beliefs. No one would want to offend their ancestors or to make life for their descendants unbearable, so they complied.

It is estimated some 700,000 conscripts were involved in the construction of a vast complex underground, which is thought to be as luxurious as any of the palaces the Qin Emperor maintained during his mortal life on top of it.

A group of villagers uncovered the first of the terracotta figures that surround the complex to protect its occupant, when they were building a water-well in the Xian province of China in 1974. ‘We thought it was a temple statue – a Buddha perhaps. a spokesman for the group told a USA journalist ‘The women thought it might bring a curse down on the village.’ 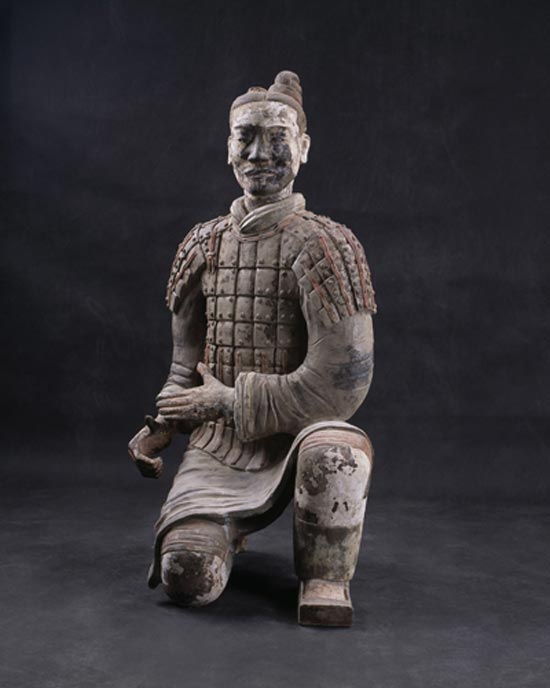 The terracotta army was originally found in hundreds of pieces. Not one was found intact. Before they could be displayed they had to be completely and painstakingly restored.

Today the terracotta army he built for his afterlife have no battles to fight, but rather seek to win the war for China about culture as art.

As part of events highlighting an exhibition at the Art Gallery of NSW entitled The First Emperor: China’s Entombed Warriors in 2010/2011 a group of learned academics, working in the field of Chinese art and archaeology around the world, lectured at a symposium held on the first weekend in December.

During question time they gathered on stage to collectively remind participants how the west must be careful not to take a romantic view of the terracotta army on display or to seek to glorify it, or the first Emperor of China Qin Shihuang (259–210 BC) and his achievements in any way.

They pointed out that while the first Emperor’s vision in constructing a vast universe for his afterlife was in many ways remarkable, that they couldn’t stress enough how it had come at a huge price to humanity. At Sydney the exhibition featured ten complete ritual terracotta foot soldiers: some generals and a kneeling and a standing bowman.

They were shown off alongside a variety of Chinese ritual ceremonial vessels, bronze bells and some ornamental gold and jade weapons, all of which have been crafted with great skill.

There were also sets of amazing stone armour, which weigh about 20kg and consisted of approximately 1020 pieces. As archaeologists pointed out the workers making these could add six pieces a day. So that means each piece of armour took about 170 days to complete.

There were two complete bronze charioteers with bronze horses uncovered in 1980.

The originals are always kept safe back in China and it is a replica that travels and was on display at Sydney. It still captured the imagination and commanded attention. Also included were the little known about bronze birds.

Discovered during the last decade, they were arranged disported on the banks of a notional river. This had been designed to flow around the symbolic haven created by the first Emperor of the Qin dynasty (221 to 206) for his journey into the afterlife.

There are also other ceramics and palatial architectural remains. These included ritual items and bronzes that were crafted by individuals and considered and viewed as works of art.

Sydney was the first city in the world to host the terracotta army in 1983, only nine years after they were first found.

I was there and remember the show and its atmosphere well. I also remember that the figures were lauded as ‘art’ and as portraits of real people. This supposition is now very definitely retracted by those who first proclaimed it, the archaeologists.

It seems the more they excavate and uncover the remains of the first Emperor’s huge army the more it has been realized that the figures simply follow a hierarchical stereotype.

They were mass produced using moulds and they are really only objects of propaganda, whose designs are affected by traditions of ritual and symbolism. 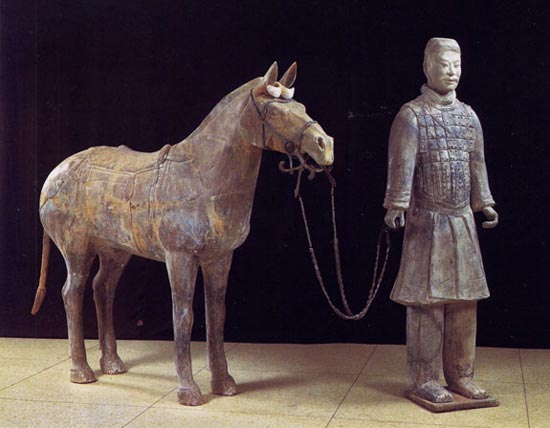 To produce the figures in seven parts the hands were produced in the kilns of ceramic workers in one province, the feet in another, the torso, the head and so on. It is estimated 1000 people worked for three years to make the army of 8000 warriors and their horses. The ill-fated workers who assembled and applied their original various vibrant colours, including bright red, vermilion, burgundy, dark green, pastel green, sky blue and ‘Han purple’, more than likely perished along with the Emperor in his tomb, as per established custom.

This would seem to be proved by the fact there was nothing like them before, or since the reign of the first Emperor.

The style of figure known as the Generals give the impression they were not men to be trifled with. Originally presented standing on a raised platform, a device that reflected their privileged place at the top of both the food and power chain, they become an even more imposing presence looking down on their subordinates.

Robust both in body and facial features, which reflect their rank and that they had plenty to eat, the armour they wear is heavy and foreboding. It acts as a warning they are invincible and, at 2.2 metres tall, they are slightly larger than life.

By way of contrast there was the standing or a kneeling Archer who ranked way down the pecking order. They were much smaller and wore no protective armour, because they were required to be agile and fleet of foot when protecting their master.

Their bodies and faces were noticeably thinner than that of the generals and the rest of the army in between. This indicates they were not as well off financially.  There were thousands of them taking the first line of defense surrounding the infantry and cavalry and, as such were expendable. 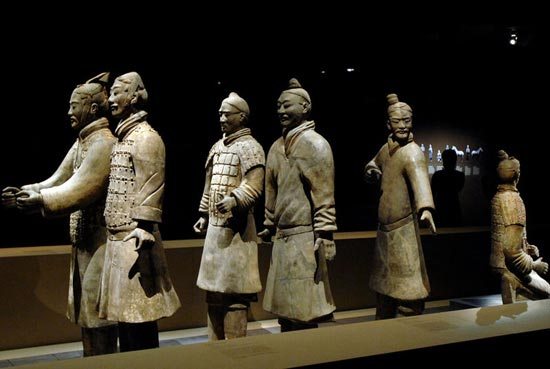 The exhibition allowed Sydney people, visitors and tourists with an opportunity to view the terracotta army up close and personal without having to travel to Xian province. There they stood in a dark, dusky recreated tomb like setting evoking the atmosphere of the mausoleum underground in which they were found. Herein lay the problem for me.

A burial ground is something everyone in the west respects so the way they were displayed both affected and informed what the majority of people took away from the exhibition with them. Professionally it was a great piece of staging. However the setting was deliberately designed to get the majority of people’s emotions going.

It demanded from the viewer an almost romantic emotional response the Academics and the Director of the Art Gallery of NSW were warning the informed group, that made up the audience at the Symposium, against. So it begged the question.

If it’s not for a diplomatic reason, why didn’t the brief for display require of the designers they put the objects into a setting that allowed them to be viewed by the light of day? And, yes, there are lighting issues in terms of preservation and conservation. But this is only a challenge very clever designers would have surmounted. If the terracotta army were placed in such contemporary setting, rather than one evoking the gloom of the underworld, it would provide a very different and much more dispassionate forum for the community at large to assess them by. Much of what is believed to be under the surface in China still remains buried and, we were told that if the archaeologists continue to excavate the site of the mausoleum fully it is estimated it will take up to a hundred years + to reveal the full extent of its contents.

This includes what remains of its first Emperor and the setting in which he placed himself.

The terracotta army are fabulous objects. They are of great historical and cultural significance and achievement to the people of China, much like the finds from the tombs in Egypt are for their peoples and so on around the world.

This is not something anyone would dispute. But the question needs to be asked. Is the terracotta army art or artifice?

Should they be displayed in an ‘art’ gallery, which is all about presenting fine international and Australian art, or rather in a Museum whose premise is about presenting stories of cultural development and history. Returning to the earth from which he was made. The warriors were found in pieces originally and had to be restored, courtesy Art Gallery NSW

For the simple villagers who found the buried army and the ancient village they grew up in, the entombed warriors have seemingly proved more of a curse than a blessing.

While they made history they lost their land, which was reclaimed. Some of the last remaining earn their living today signing books in a gift shop in the Museum of Terra-cotta Warriors and Horses, where they are paid for their trouble.

The terracotta army is a billion dollar business for China and a great money earner for the galleries that display it.

As a final aside, Edmond Capon reminded Symposium participants that the man who discovered the first piece of a warrior, was only paid about A$5 for his find, although he was issued with a certificate from the government to confirm he was the first man to see the terracotta warriors again after 2000+ years.

The exhibition from MoMA New York on show at NGV International until October 7, 2018 captures the je ne sais quoi of the eternal; a grand conversation of ideas