Visitors to New York are constantly amazed at the fabulous ‘gem’ galleries that occur around the town. The Forbes Galleries are located in the heart of Greenwich Village on the west side of Lower Manhattan, tucked away within the lobby of the Forbes Magazine’s headquarters. The Village may not be as bohemian as during its ‘beatnik’ heyday, but its still full of very cool hangouts, fabulous shops, restaurants and cultural event happenings. Curious visitors and Avant-garde locals alike flock to special shows alongside creative college students and purpose driven professionals, who are all integral to this very stylish residential district. The Galleries offer a range of changing exhibits. Currently on show in Galleries 1 and 2 is Titian Meets West Side Story: The Work of Edward Melcarth (1914-1973) who admired the rich colors used by Titian, Veronese, and Tintoretto in the ‘Baroque’ era. 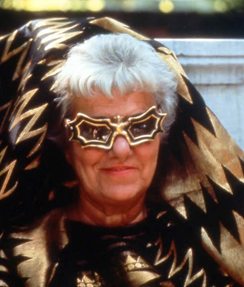 He used them to depict the America of the 1950s and Malcolm Forbes and his son often purchased his works. Another friend and patron was Peggy Guggenheim for whom Melcarth designed an iconic pair of 20th century sunglasses. A mural artist of considerable talent, Melcarth was also a teacher of painting and drawing. Between 1965 and 1973 he divided his time between New York City, where he taught at the Art Students League and Venice in Italy where he enjoyed the atmosphere, which inspired his sculptural work. This hauntingly good-looking male bust was signed and dated 1968.

The show focuses on his images of city life, full of waitresses, construction workers, medics, bikers, prostitutes and drug addicts. Although he always painted from reality, it was the romance of a given scene that was important to Melcarth. He recorded the high urban drama of the Eisenhower and Kennedy era on canvas similarly to Arthur Laurents and Jerome Robbins who brought it to stage and screen with West Side Story. Titian Meets West Side Story: The Work of Edward Melcarth, BC Forbes Galleries 1 & 2 until June 7, 2014

The ABO with Jamie Hey on period cello and Bart Aerbeydt from Belgium on the natural horn, paid tribute to Haydn, Mozart + Friends in a superb symphony of sound