Eureka (yoo-ree-kuh) from the Greek, literally means ‘I have found it!’ – exactly what the author Clare Wright has done in her new Australian revisionist history book, The Forgotten Rebels of Eureka.

Dr. Wright has not only found it, she has found them; the women and girls who lived, worked and died beside their husbands, brothers and fathers in the 1850’s on Australia’s goldfields at Ballarat.

Women, until recently, left out of history books which describe Australia’s nineteenth century goldfields and the legendary Eureka Stockade. This was a foundation event in a then young English colony.

The Forgotten Rebels Of Eureka by Clare Wright sets the record straight. Women were not only around in significant numbers they made a huge contribution to the shanty towns that grew up around the diggings.

Engaged not just in traditional roles they were top of the bill actresses, teachers, writers and publicans.

The Ballarat gold-rush is typically represented as having a cast list of mostly unattached badly behaved young men who lived in lawless, chaotic tent-cities while they mined rich gold seams.

Ten years in the researching and writing, Wright’s book refutes this view of a community dominated by ruffians and con-men; revealing the Ballarat goldfields of the 1850s as a reasonably law-abiding community of men, women and children, most of whom had travelled a long way to seek, if not fortune, at least a livable financial reward for their hard work.

In 1854, the lure of gold, mined for the price of a pick-axe and a tent, caused Ballarat’s population to increase rapidly.

Twenty five percent of the community, female, most of them young and newly married, it’s no surprise there was a baby boom. 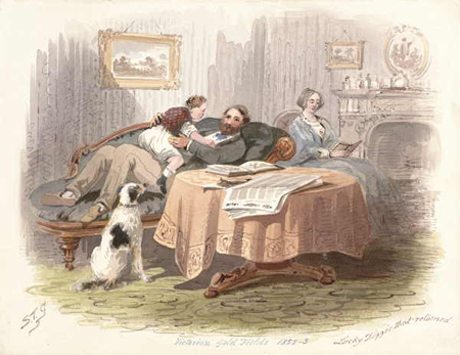 The Domestication of the Digger: 'The Lucky Digger that Returned', 1852 by S.t. Gill - Note: the 'modest' hint of gold around his wife's neck - courtesy State Library of Victoria

In 1854-55, breast pumps were sold in stores and childcare was organised for dances and balls.

The picture painted in The Forgotten Rebels Of Eureka of goldfields domesticity – women who cared for children, cooked meals and worked beside their men, despite the noise, dirt, lack of water, primitive sanitary conditions and domestic violence is a fascinating look at the social history of the time.

A seminal event in the establishment of an Australian national identity, the incidents that led to The Eureka Stockade where miners rebelled against local authorities, began as a series of protests against the licence fees charged by the colonial government, which were enforced by poorly trained, brutal and often crooked police. Miners had to pay a fee each month to renew their licence, whether or not they had found gold.

Gold seams depleted, in November 1854, tensions increased, a hotel was burned down and three miners were arrested – 10,000 thousand miners met to demand the release of the prisoners, abolition of licence fees and the right to vote. Demands refused, the miners held a meeting at the Eureka diggings (named after a deep seam of gold).

They built a fort, which they named the Eureka Stockade. On Sunday, 3rd December, several hundred soldiers and police attacked the stockade. Better equipped, government troops outnumbered the diggers; the battle short, accounts vary, but it is thought 22 diggers and 5 soldiers were killed.

Women of the goldfields who were caught up in the miner’s fight for a ‘fair go’ for all, not just the ruling elite, have never been mentioned in official government reports or the accounts of the Eureka Stockade written by male historians. This extraordinary oversight, in keeping with  Australia’s male dominated historical records has been remedied by The Forgotten Rebels Of Eureka – women were there; their work and suffering every bit as heroic and inspiring as the men they helped to turn a fledgling colony into the modern state of Victoria. Historian, public commentator and university lecturer, Clare Wright through letters, newspapers and research of the period (included is an extensive bibliography) has written a realistic, exciting, sometimes humorous and at times sad account of truly remarkable women.

They were Sarah Hanmer, theatrical entrepreneur and founder of one of Ballarat’s first theatres, the Adephi, was a great supporter of miner’s rights and the fight to change the iniquitous government licencing system.

Sarah helped a young American miner, James Mc Gill, who had been part of the rebel force that challenged the authorities at the Eureka Stockade, escape punishment by providing and helping him dress in women’s clothes.

Then there was Catherine Bentley, publican, who with her husband, James, ran the Eureka Hotel, a popular goldfields hotel where large numbers of working people congregated to drink, gamble and dance.

Unhappily the hotel was burned down by an angry mob after Catherine and James were suspected of playing a part in the death of a young miner; James was imprisoned and Catherine, in her early twenties, became a single mother, the sole support of her children.

Catherine Mc Lister, a twenty-eight-year-old Irish women, who bravely brought a complaint of sexual impropriety against a police captain; literate and undismayed, Catherine stood before a board of inquiry and stated her case, she replied to cross examination and herself, cross examined witnesses.

Despite the charge being dismissed as vexatious (Catherine’s husband having been previously arrested by the police officer charged, the board decided her action was retaliatory), she acquitted herself well, a woman prepared to risk her reputation and take drastic action against the sexual advances of a police officer who preyed on women who worked alone in their homes on the goldfields. The Forgotten Rebels of Eureka has many true stories of women, often newly arrived immigrants, who faced life on the goldfields, undeterred by hard work, childbirth, illness, poverty and errant husbands, they survived harsh weather and lack of  housing with courageous optimism.

Clare Wright’s intimate writing style breathes life into these women; often dying young, they lived, loved and worked in what, for most of them, would have been an environment of extreme hardship.

I particularly loved the glimpses of life in the nineteenth century gained from letters of women who welcomed the chance to escape the conventions of the time for the freedom of a brand new country.

Matter of fact, I can’t remember a chapter that wasn’t an absorbing page turner. Listen up: Nicole and Naomi; there are so many wonderful women’s stories in The Forgotten Rebels Of Eureka that beg to tell the true story of Australia’s gold-rush – all of them perfect for the big screen.

I caught up with author, Clare Wright and asked these questions:

Q1. An award-winning historian and public commentator who has worked in politics, academia and the media, where did it all begin and why history?

I was just one of those odd kids who loved history from an early age.  Not kings and queens and knights and damsels in distress so much as the process of historical enquiry: how did we end up who we are and how we are?  And why??

I suppose I could have been a psychologist (or a private detective), but I have always felt most at home in libraries, surrounded by books and archives.  I had a lonely, fractured and peripatetic childhood and books grounded me.  But I also love to TALK, and that’s where media and politics come in.  I want to communicate the results of my research to as wide an audience as possible.  I am now one of those odd adults who believe that words can change the world. 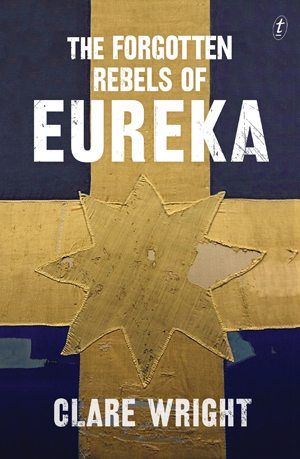 Q2. Your book contains vivid snapshots of women whose lives were impacted by the events that happened in and around Ballarat during the period of the Eureka Stockade. During the course of your research was there a woman whose story you would have liked to tell in more detail?

In the ten years it took me to research and write The Forgotten Rebels of Eureka, I came across at least a hundred women I would have liked to discover absolutely everything about.  But the problem with historical research, and especially women’s history, is you are always constrained by the limits of the archive.

It’s hugely time-consuming, pain-staking work.  Even with some of the women who I practically stalked for months on end — publican Catherine Bentley, theatre owner Sarah Hanmer, writer Ellen Young, newspaper editor Clara Seekamp — there are gaps in the records.  It’s frustrating but even the dead ends add to the obsessive joy of research.

Q3. How hard is it to perform the balancing act of wife, mother and professional historian and what’s upcoming?Very!

But like all things, it gets easier with practice.

My husband (furniture designer and maker Damien Wright) is one of those rare men who values my work and ambitions as much as his own.

Though life is busy and complicated and forever chaotic, I wouldn’t have it any other way.  What’s coming up? Small publisher of the year 2012 and 2013, Text Publishing Melbourne have done Clare Wright proud; The Forgotten Rebels Of Eureka is a quality production, at 539 pages.

It is strongly bound, the front and back inside cover pages have a reproduction of an 1850’s digger’s road guide to the Victorian Gold Mines.

There are attractive colour plates of characters mentioned in the book and prints of artist’s impressions of life on the goldfields, most notably by colonial artist S.T. Gill.

A scholarly work of important social and historical significance, Clare Wright’s book The Forgotten Rebels Of Eureka is a definite choice to add to your wish-list as at last, she puts the legend ‘Wright’.

Note: wearing allegiance to the flag is one of a series of watercolours from Australian Sketches – Life on the Goldfields, a sketch book by Canadian Charles Doudiet recording life on the diggings, and the only known visual document to be made by someone present at the Eureka Stockade. Doudiet wrote of this scene that captures the meeting at Bakery Hill when the Eureka flag was raised for the first time on 28 November 1852: “The Oath”.  Thus – in sight of the Ballarat Camp – did ten thousand men raise the azure folds of the ‘Southern Cross’ and on bended knee swore to defend it.  The leader, the brave Lalor who on the Eureka received seven balls yet lived – he stands on the stump – There is Vern in a red shirt – on whose head a prize of £300 was set ‘dead or alive’.  Black the ‘Diggers Advocate’ the unfortunate Ross – basely murdered by a mounted trooper after he had surrendered – and other leaders too besides they swore…” And to this Doudiet has added the following footnote: “Joyce, Penny and Fletcher with myself carried Ross to the Star where he died of great pain about 2.00am on the 5th”.