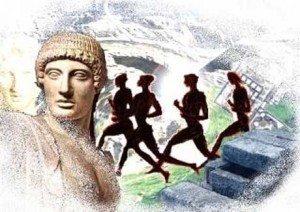 There are enough irksome and troublesome things in life;
Aren’t things just as bad at the Olympic festival?
Aren’t you scorched there by the fierce heat?
Aren’t you crushed in the crowd?
Isn’t it difficult to freshen yourself up?
Doesn’t the rain soak you to the skin?
Don’t the noise, the din and other nuisances bother you?
It seems to me that you are well able to bear,
and indeed gladly endure all this,
when you think of the gripping spectacles that you will see.
Epictetus, Greek Stoic philosopher and moralist, left a description of the Olympics of his day for us to ponder in his Dissertations, written between the first and second centuries. His pupil, Arrian the historian, collated his sayings into a manual entitled the Enchiridion, as well as eight volumes of Discourses, four of which survive to this day.