By the 1840’s in New South Wales and Van Diemen’s Land years of economic depression and drought began as the first Australian pastoral boom passed. It was the discovery of gold and resultant flood of fortune seekers that sent the colonial economy into boom again. As in England a grand country estate represented the pinnacle of material and social achievement. Homestead portraits were commissioned by the owner of the property to adorn his own chimneybreast showing of the mountain, plain, water and sky with house and outbuildings depicted with accurate detail. Greek houses gave way to Italianate style villas. These were the boom years of the Industrial Revolution and grand houses like Melbourne’s Rippon Lea, epitomize the extravagance of the era, both in its architecture of polychrome brickwork set off with elaborate gardens that change constantly with the seasons. Rippon Lea was planted in the Gardenesque style, where one could focus on individual plants rather than on the overall design quality. 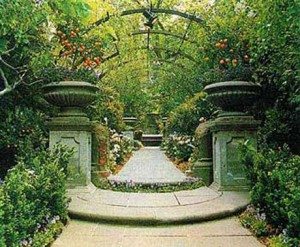 Tiled colonnades, columned pergolas, urns on pedestals and balustraded terraces linked house to garden. Grander examples were mansions with palace facades, surmounted by loggia topped towers that overlooked terraces and flights of steps complete with cast cement balustrades, urns and statuary. It was not uncommon to find Venus, Napoleon, or Captain Cook lurking about among the trees, or rising from an ornamental bed of massed verbenas or zinnias. 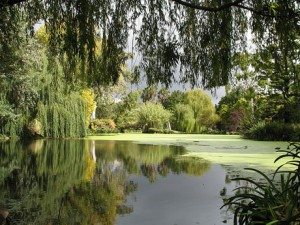 The magnificent wide lawns sweep down to a two-acre lake where the fine bridge, made of iron, has been cast to give the appearance of timber. Much of the charm of Rippon Lea lies in the sensitivity, which has been shown for the garden’s historic origins. Water subtly pervades much of the garden at Rippon Lea, and the white trunk of the lemon scented gum, Eucalyptus citriodora, is reflected on its rippling surface. Plantations of palms, with rockery’s planted with cacti, other succulents and rustic ornaments and bark covered branches formed unique summer houses. 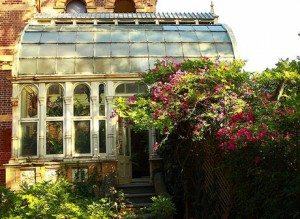