The Old Fitzroy Theatre is attached to the iconic Fitzroy Hotel in Wooloomooloo. It is a quirky funky Theatre that I we accessed through the Hotel past the bustling kitchen, down a flight of stairs and into the tiered venue for this production of The God of Hell, which started on 26 August – 13th September, 2014.

Rodney Fisher had the duel roles of Director and Designer. I was immediately captivated by the stage design.

It was scrupulously planned and meticulously built to create a farm house in the dairy country of Wisconsin.

The attention to detail was palpable with well worn crockery sitting comfortably in the wooden side boards, a stove to the right of stage and a mirrored hall stand positioned in the centre of the back wall. \

The ambience of the room was enhanced by wooden floor boards, crazed walls touched by the hands of time and an old porcelain light fighting suspended from the ceiling. Instantly the setting transported the audience to a place where there was a sense of established routines and contented familiar every day life patterns. Max Lyandvert the Sound Designer sympathetically amplified the pastoral theme of the stage setting through sounds of country guitar music echoing in the Theatre.

We met the long time farming couple Emma [Vanessa Downing] and her husband Frank [Tony Poli] attending to the daily chores of watering the indoor plants and polishing farm boots.

There was mooing from the precious heifers in the background and life seemed uncluttered and very predictable.

The tumultuous spiraling of catastrophic events began after the intrusion of Haynes [Jake Lyall], the son of a friend of Franks.

These events would unhinge the couple and challenge the audience. 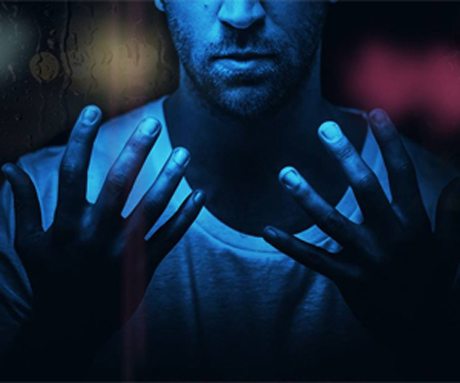 The sense of menace and ominous undertones was suggested by the tormented mental state of Haynes and his unsettling ability to electrically shock anyone he touched.

Jake Lyall’s exacting performance was skilful and he had assimilated the character and executed the role with pathos and commitment.

Emma questions Frank about consenting to Haynes staying in the basement. Frank was sympathetic to Haynes’s pleas for help, citing that “he was breathless”.

The conversation evoked suspicion and uneasiness from the audience.

Emma prepared breakfast and the smell of bacon crisping alerts the senses and softens the apprehensive atmosphere, providing a distracting respite from the turmoil.

However the anxiety of Emma is intensified by the confident and cool appearance of Welch [Ben McIvor]. He was a ruthless cunning conniving operative masquerading as a salesman for patriotic memorabilia “reminders of their proud heritage” he triumphantly postulates.

Welch calls Emma by name and this is both confronting and humiliating for her as she has never met the man and has no knowledge of him.

He was menacing in a controlled and deliberate fashion. Ben McIvor’s sense of timing and detachment promised a very fine performance that was delivered throughout the play.

Welch’s cynical use of patriotism snared the impressionable and gullible Frank. He sold his beloved heifers and formed an alliance with the corrupt government official. Frank was hypnotised by the carefully orchestrated propaganda and ultimately ‘contaminated’ by corporate greed.

Frank says very succinctly and poignantly “we were not paying attention”. Ultimately a very high price for complacency was the outcome. The final scenes provided Tony Poli with the opportunity to cement his performance with finesse and resignation.

The autonomous group was in “absolute command”. Haynes was tortured in front of Emma and Frank in a barbaric electric shock mode. The sounds of pain and submission were heinous. The chant used by Welch as a controlling verbal method was degrading and quelled any hope of redemption for him or freedom for Frank and Haynes.

Meanwhile Emma rings the bell a symbol for the help that never will arrive. The verse of the Peter Paul and Mary song If I Had a Hammer began playing.

The song reverberated through the theatre and engulfed the audience in an aura of disbelief and wonder at the tragic political and environmental state of the world and the protagonists.

Vanessa Downing strategically developed her character building her performance to a stronger and more centred and aware individual. However, I felt at the end of the play she was as doomed as the other characters on stage.

The God of Hell explores complex global issues that haunt the twenty first century. Issues of ‘fracking’, corporate farming, the destruction of natural habitats both above and below ground level and the annihilation of civil liberties and political freedoms are interwoven in this complex and controversial play.

Although not regarded as one of Sam Shepard’s major plays I found it thought provoking and more importantly challenging the acquiescence by which we live our daily lives. Complacency can be as dangerous and as responsible as treachery and control.

Rodney Fisher’s leadership and artistic qualities were evident in this very professional production. He was effective in inspiring the cast to deliver the playwrights’ intention and make the words and ideas linger in the audiences’ reflections.

The God of Hell Mixing the dynamics of tales from the Brother’s Grimm traditions of theatre, musicals and modernity of film making, Into the Woods is a triumph of entertainment