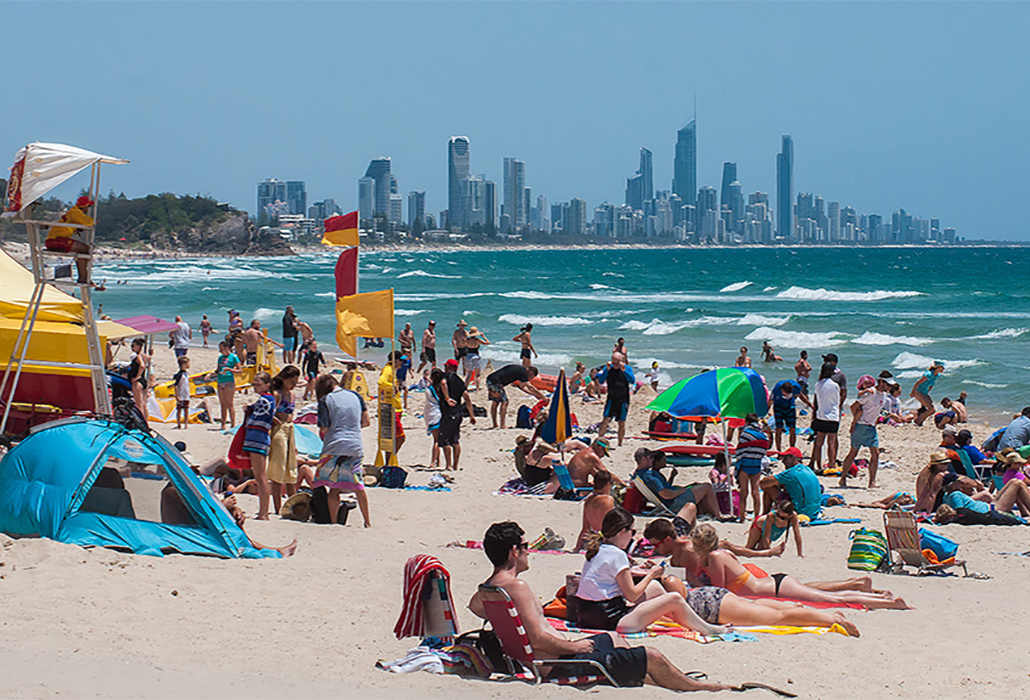 The Gold Coast is situated in the south east corner of Queensland and is the sixth largest city in Australia with a population of 650,000 spread across 57 kilometres of pristine coastline. It is larger than three of the nation’s capital cities Canberra, Darwin and Hobart.

A premier tourist destination with its diverse natural and man-made attractions, surf, sand and sunshine abound in this cosmopolitan and vibrant city. Recently The Gold Coast hosted the Commonwealth Games, the second largest sporting event in the world.

It is strategically located on the edge of the Asia-Pacific rim, with access to two international airports and therefore perfectly positioned for such an international event. 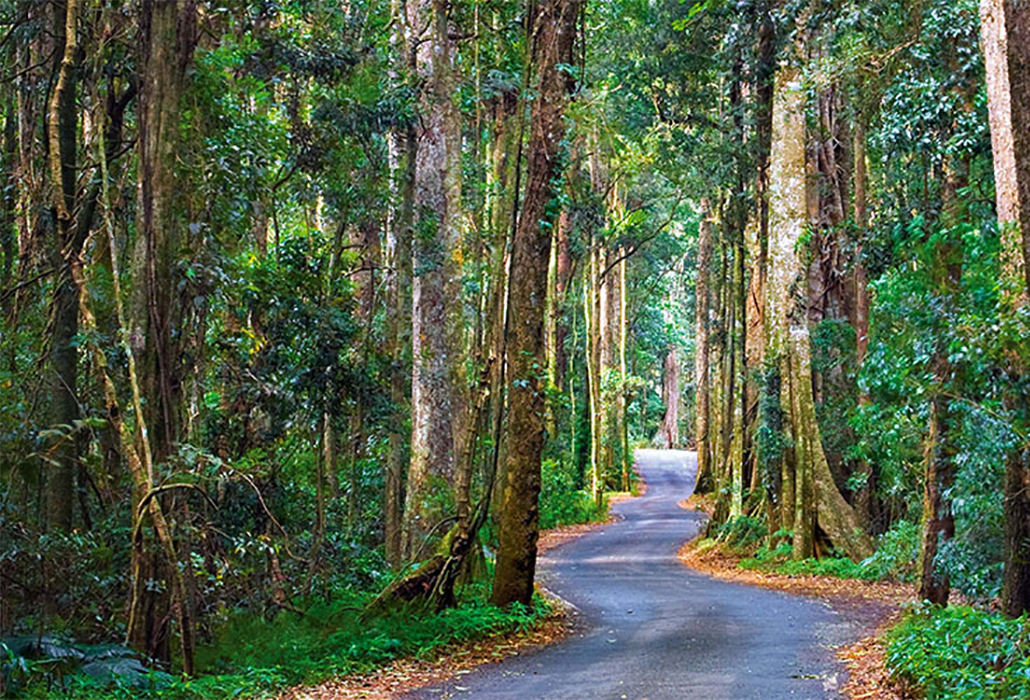 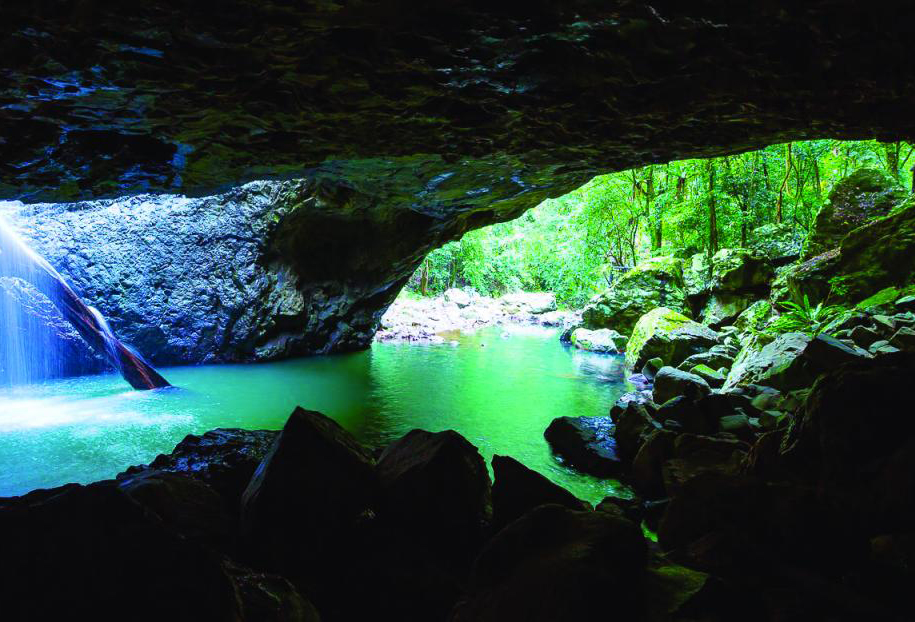 The Gold Coast’s hinterland is recognised as one of the most biodiverse regions in Australia. Its subtropical rainforests protect a huge number of rare and endangered animals and plants. 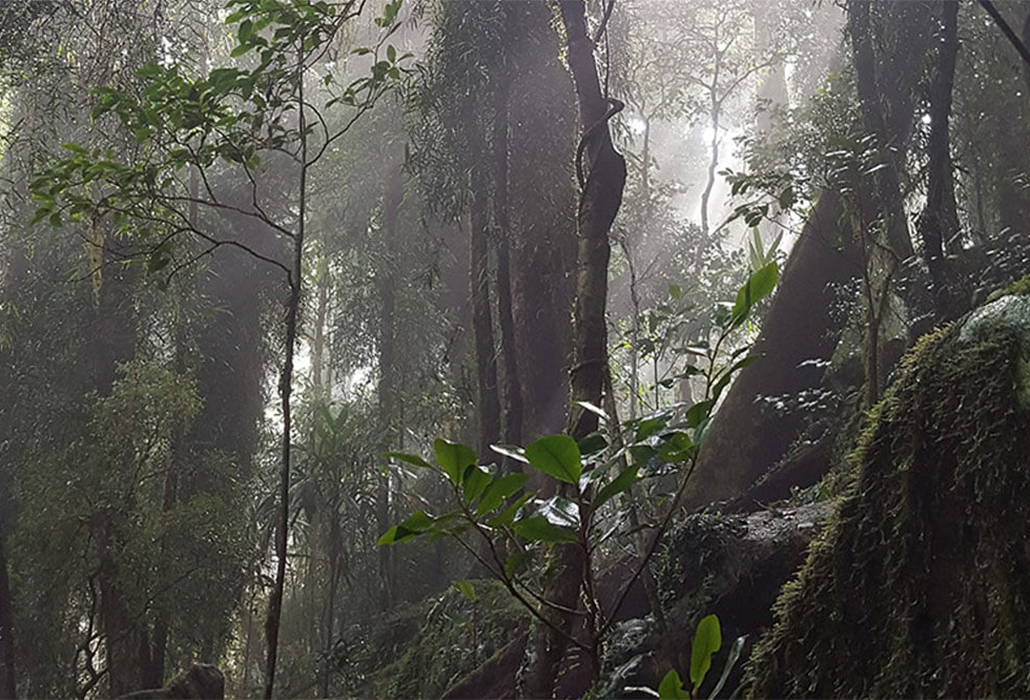 We travelled to Springbrook National Park, part of the Gondwana Rainforest, home to abundant wildlife including koalas and rare birds. Some animals that are few in number are confined to this World Heritage area and include the Coxen’s fig-parrot, rufous scrub-bird and the Fleay’s barred frog.

Later we walked the Natural Bridge circuit, a one kilometre track that descends to the creek via many stairs. This was an opportunity to observe the subtropical rainforest that existed when dinosaurs roamed the earth. 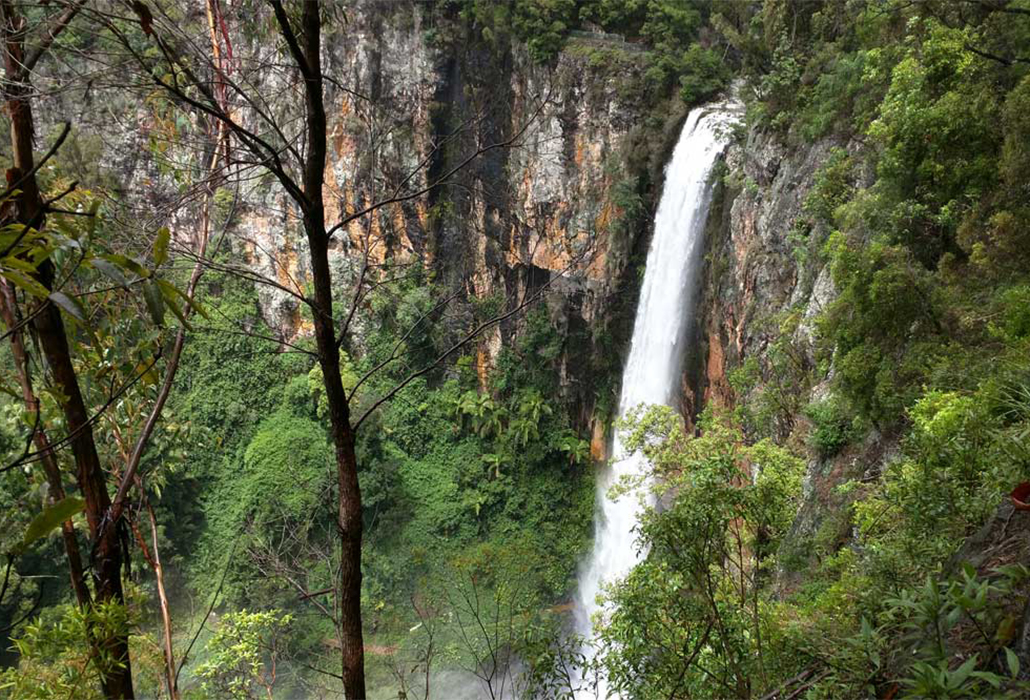 For example the amazing hoop pines known as ‘living dinosaurs’ because they are relics from the Jurassic Age, 180 million years ago.

Sadly only 0.3 percent of Australian rainforests remain and fortunately World Heritage listing recognises the need to preserve these forests for the future. Looking up, the closed canopy maintained low light and high humidity as woody vines or lianas twisted and turned towards the canopy to capture the light.

Epiphytes such as crow’s nest ferns and elkhorns clung to the trees for support. Below, walking stick palms abounded on the forest floor. The lush ancient forest is lined with buttress roots and strangler figs. 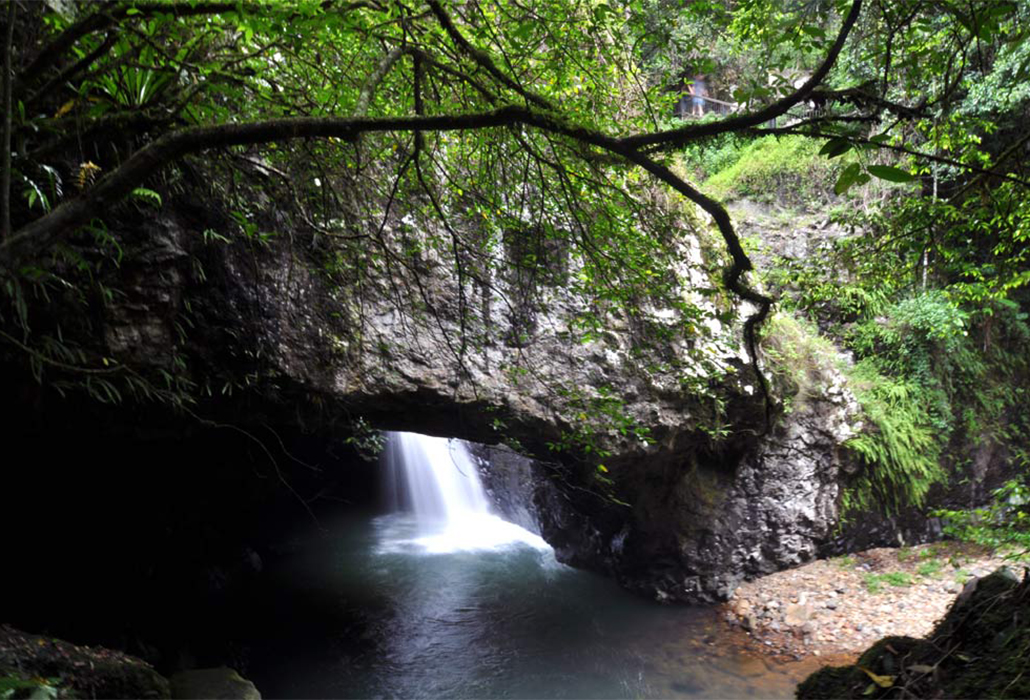 Then we reached the Natural Bridge where the stunning waterfall poured through a skylight hole in an erosive basalt cave, a monumental natural rock arch formation. The water tumbled and fell whipping up a mist of white and casting a wave of ripples across the green waters.

Then we meandered up the walking trail and stood in the cave with its rocky ceiling cradling us in the enclosure and viewed the waterfall from a different angle. 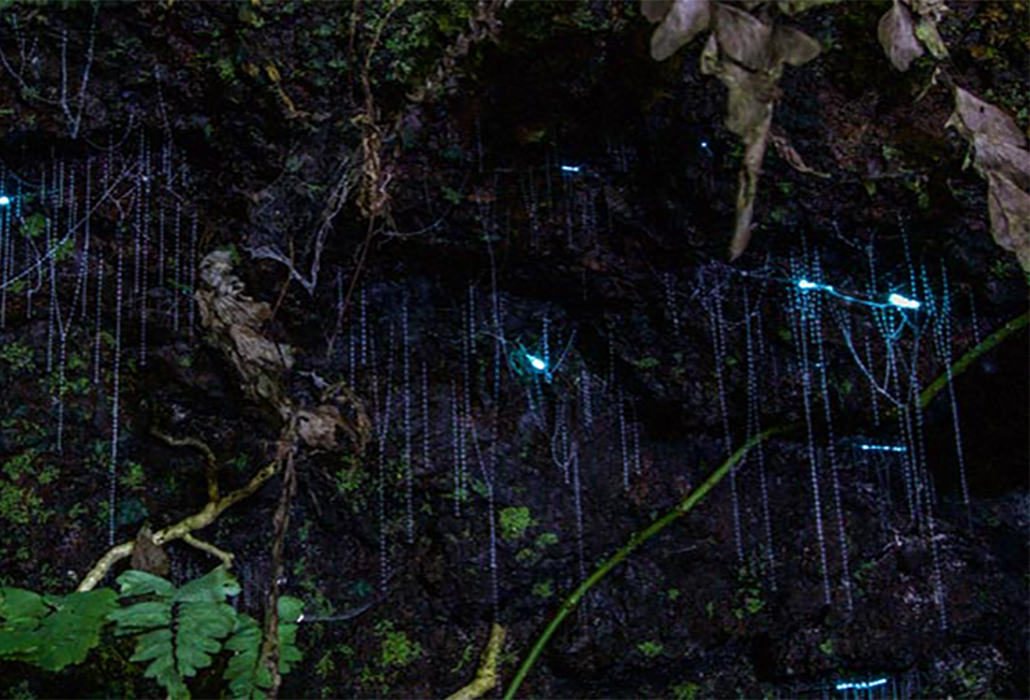 At night this cave comes alive with thousands of nocturnal glow worms, the largest known habitat in South Eastern Queensland. Glow worms are very sensitive to small changes in their habitat and may die if disturbed so it’s very important to follow the strict guidelines outlined in the public notices.  Swimming is no longer permitted in the creek, an important strategy to protect the glow worm habitat.

The cave is also home to a colony of tiny Bent-wing bats which would be delightful to witness on a guided night time tour. Bent-wing bats are small brown mammals with tails as long as their bodies. They are agile fliers and feed at night on small insects beneath the canopy of the forest.

Eels are another fascinating creature to be found in Cave Creek. They are remarkable for their breeding behaviour.  Adults travel long distances to breed in the tropical ocean and the young eels, known as elvers, return to fresh water streams like this creek to continue the cycle. 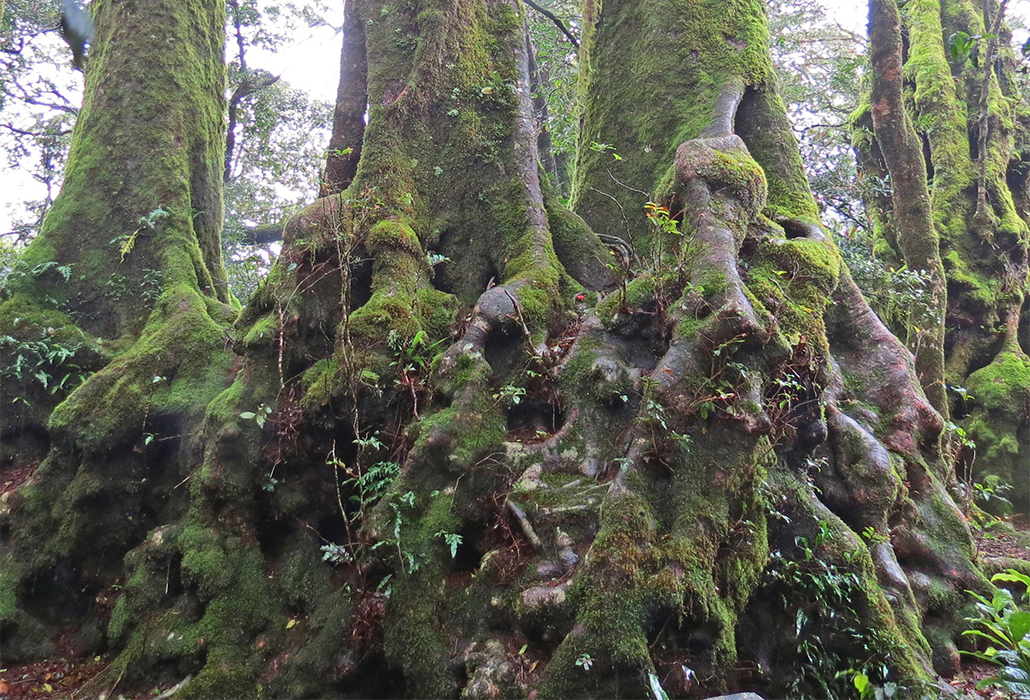 Then further on in the Springbrook Plateau we spied the 2,000 year old Antarctic Beech trees. These majestic gnarled trees are a present day link with the mega-continent Gondwana. As we walked along the path to the Best Of All Lookout, 960 metres above sea level, we observed with awe the root crown and lower stems of these imposing trees.

They need the unique environment of cool temperate rainforests between the altitudes of 500 – 1500 metres.  The Antarctic Beech trees grow to 80 feet and have large trunks up to one metre in diameter.

During the walk our astute guide Aaron suggested we take time for moments of mindfulness in nature. 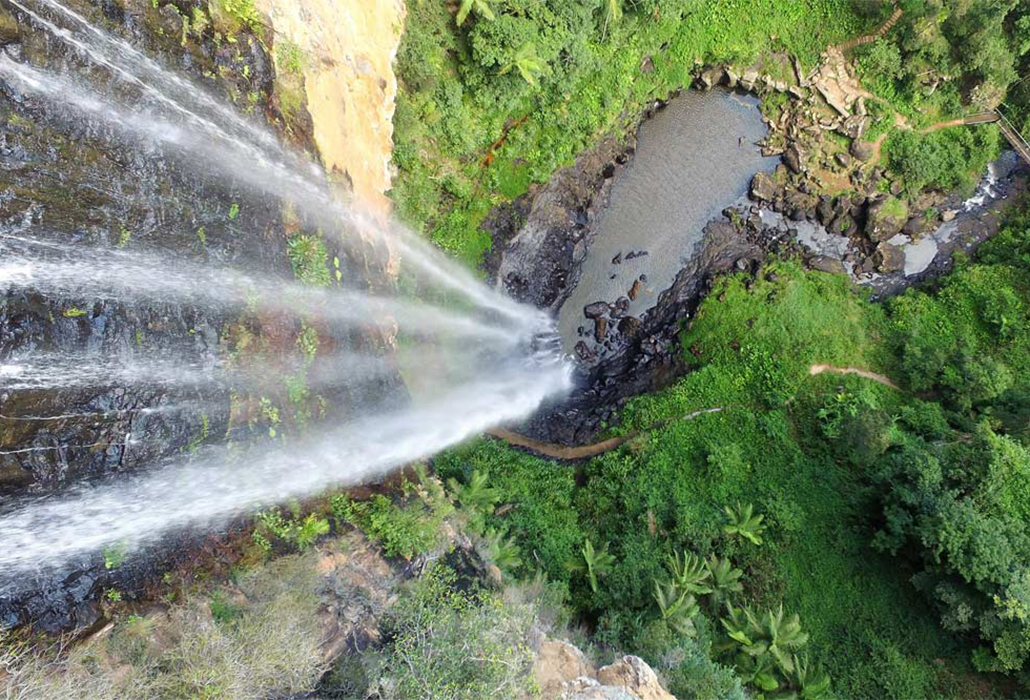 This was an opportunity for contemplation and focused us on the sounds and smells of our surroundings. We were cushioned by birdsong, the rustle of leaves and the earthy scents of the vegetation. The mystical moments bathed the spirit with a restful renewal and swathed the body with restorative energy.

At the end of the short 300 metres rainforest walk we stood on a viewing platform on the outer rim of the extinct Tweed Shield Volcano at the Best Of All Lookout. There the wide view across to Mt Warning and Green Cauldron of Northern NSW was impressive and magnetic.

The rolling green clad mountains spread with shadows and coated with darkened patches of vegetation drew the eye to the vastness, variety and wonder of nature. White swollen clouds billowed above punctuating the scene with a clarity that could have been shrouded in mist. 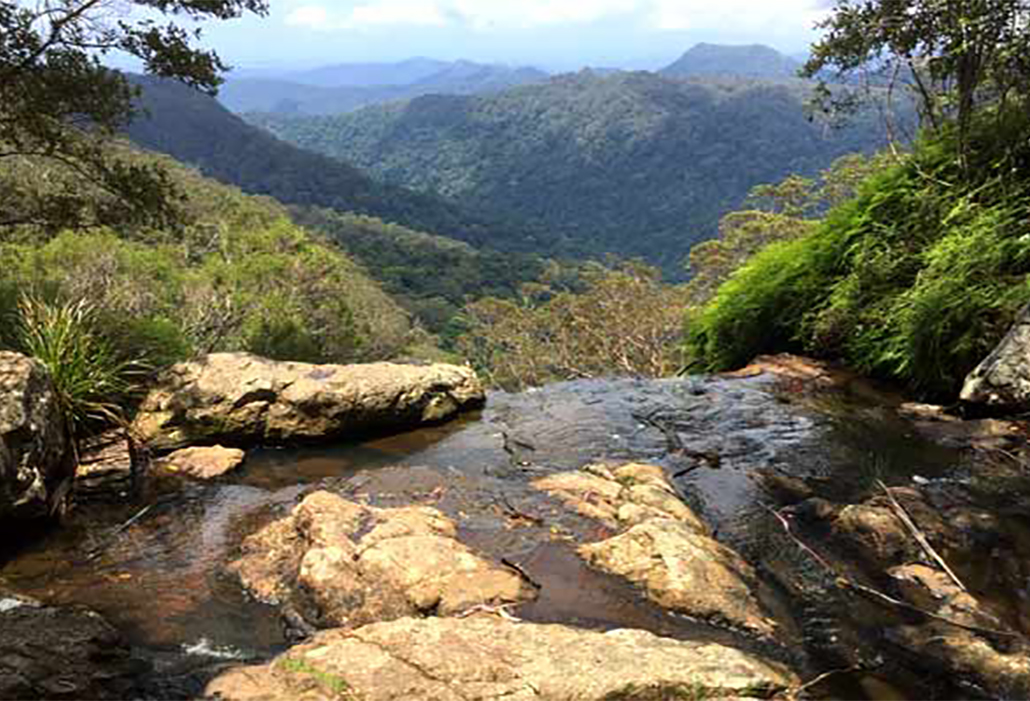 The spectacular Canyon Lookout was our next destination where views of this living landscape were dramatic in scope. Sheer cliffs splashed with the pigments of weathering and time, were framed by a tangle of dense sub-tropical rainforest.

The Purling Brook Falls drop 109 metres in a slender formation creating a spectacle as the waterfall plunges perilously down the cliff face.  The powerful sounds from the plummeting water echoed across the landscape. The expansive vista was mesmerizing. 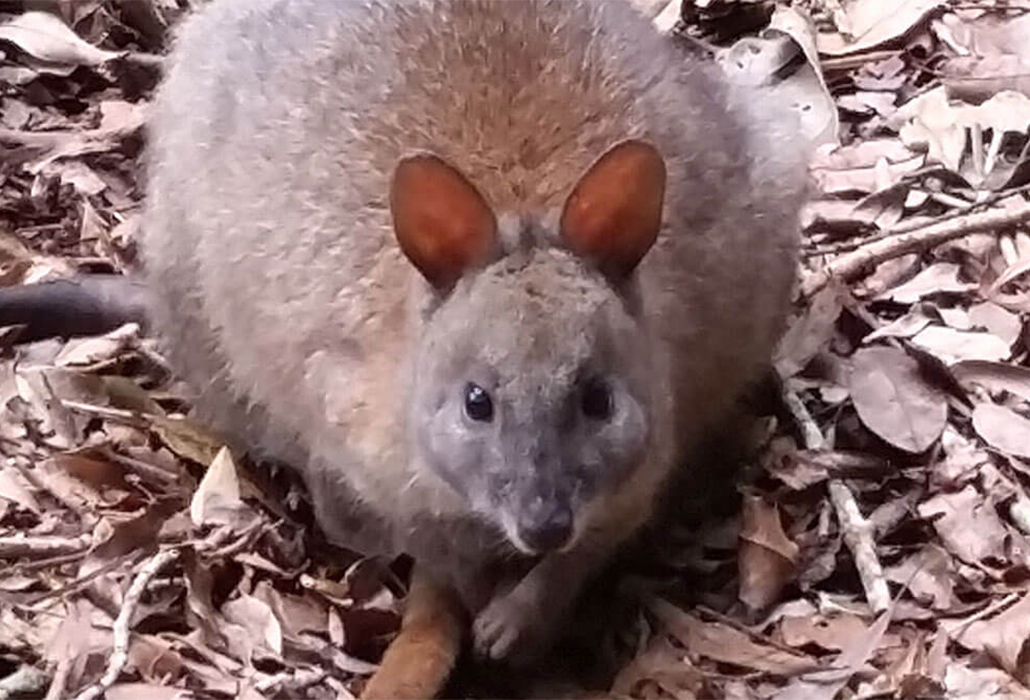 We followed the road downhill and were fortunate to observe a single Pademelon grazing on a grassy stretch of land adjacent to our vehicle. These small nocturnal marsupials belong to the kangaroo family and are herbivorous. Pademelon is a corruption of badimaliyan, from the Dharuk Aboriginal language of Port Jackson. 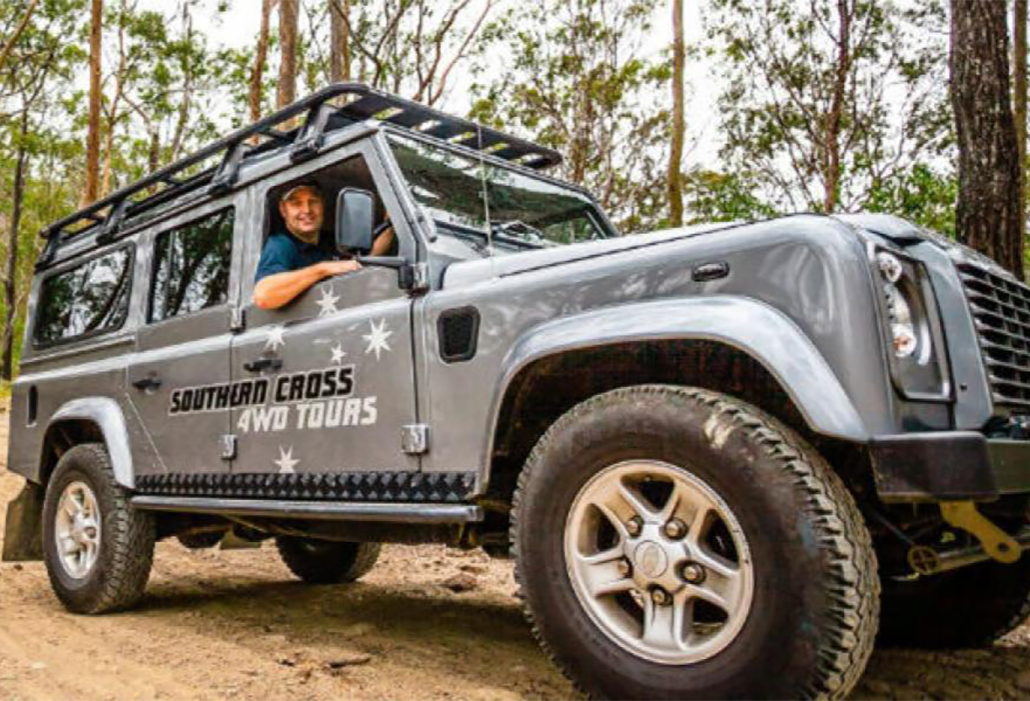 Aaron from Southern Cross 4WD Tours drove us back through the Numinbah Valley with its high volcanic cliffs and thriving country pastures and delivered us to our accommodation safe, sound and thoroughly charmed by our tour.

The experience of this tranquil wonderland of rainforests, waterfalls and breathtaking panoramas spanning undulating mountains and lush fertile valleys was both exhilarating and restoring. 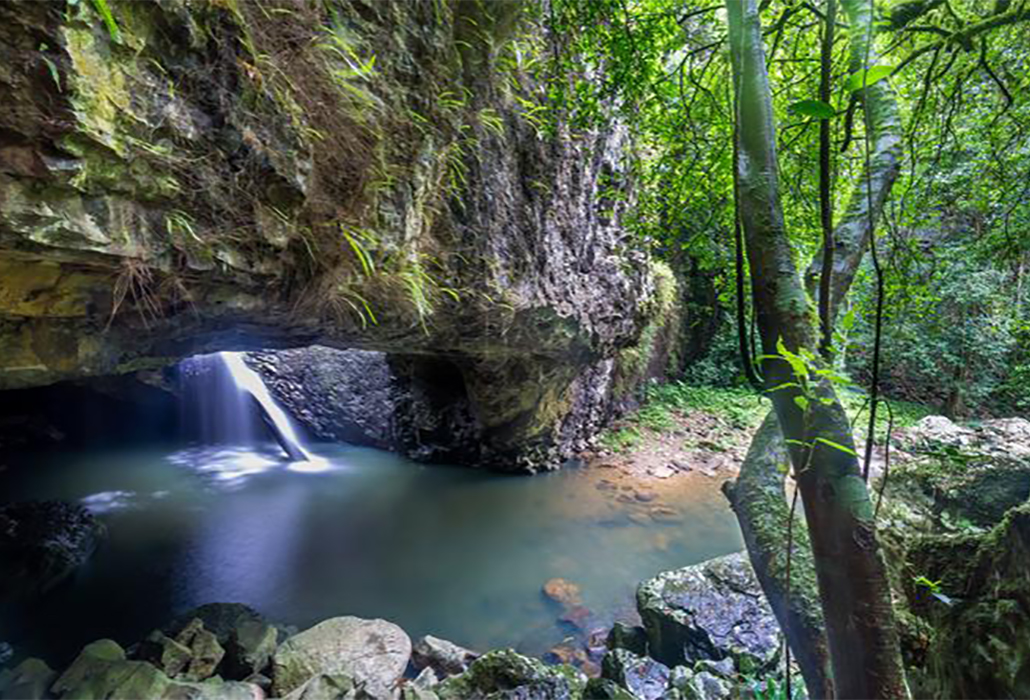 The gold of the coast and the green of the hinterland was a magic combination, as revealed on the Southern Cross 4WD Natural Bridge Springbrook World Heritage Tour.