For the execution of the voyage to the Indies, I did not make use of intelligence; mathematics or maps said Christopher Columbus (1451-1506) Genoese explorer, colonizer and navigator, who completed four voyages that helped Spain conquer the then known world. c 1460 Psalter Map of the medieval world delighting in a terrestrial paradise. Its age of myth and magic were fast disappearing. Soon they would be gone forever.

Columbus was not the first European explorer to reach the Americas; the Norsemen had already done that. However his voyages led to lasting European contact with the Americas, inspiring a feverish period of exploration that helped make the modern western world. Columbus was like many men of his age intelligent, ambitious. ver well read, knew his Latin, as well as Portuguese and Castilian and had a good knowledge of astronomy, geography, and history.

In the history of humankind map making has always represented a significant step forward in the intellectual development of human beings. It serves as a record of the advancement of knowledge of the human race and maps were often passed by members of one generation to those that followed. Making a map of a small city during the medieval period (c4th – 4th century) in Europe and England was an always-difficult process. Hellenistic astronomy established the spherical shape of the earth as a physical given and its paradigm was adopted by Late Antiquity and during the Middle Ages. Medieval people knew the world was not flat: a 13th century encyclopedia compares the way in which humans are able to walk around the surface of the globe, to the way in which a fly can walk around an apple without falling off when it is upside-down at the bottom. Johannes de Sacrobosco’s De sphaera mundi published c1230 introduced the basics of astronomy and was used in universities for hundreds of years. Despite this knowledge the myth of the flat earth prevailed. 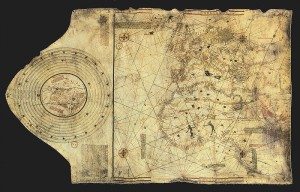 There are a number of medieval maps known in the world that survive. They are mostly of Anglo/Norman/French origin as well as those originating in Spain. Some include wondrous monstrous or mythical creatures, yet others come complete with angels. Some are more like wonderful works of art, rather than practically disposed for navigational purposes. The age of seafaring brought great advances in charting and during the fifteenth century map making began to leave the realm of art and imagination and become one of science. During the time of Christopher Columbus techniques of celestial navigation were already in place as mariners used the position of the sun and stars in the sky, together with their understanding of the earth as a sphere to find the place they were going.

The so-called Gough Map is the first modern map of Great Britain, depicting the island with a recognizable coastline and showing routes across Britain. Most maps began their life as two-dimensional drawings, however the digital age has changed all that, allowing for realizing projections beyond that. And, it seems the medieval miracle of Great Britain, The Gough Map, has just gone digital.

It is really only since the Victorian Age that early maps of the world went from being considered amusing relics of dark-age ignorance held up to public scorn and ridicule to being seen as an essential element in understanding the medieval world-view. They are important to anyone with an interest in the art, literature, philosophy and social structure of that time.

Made on two pieces of parchment, The Gough Map features a recognizable coast-line, geographically accurate locations of towns, and measured distances between them. It came to the Bodleian in 1809, as part of the bequest of antiquarian Richard Gough, who had bought it in 1774 for 2 shillings and 6 pence. It now ranks among the Library’s greatest treasures. It has significant detail, especially towards the south of Great Britain and may represent an improvement on an original Roman model.

For those with a penchant for medieval map making and the history of cartography what follows here is the latest letter from the Bodleian Libraries at Oxford about the earliest map of Great Britain known,

A fifteen-month research project of the earliest surviving geographically recognizable map of Great Britain, known as the Gough Map, provides some revealing insights into one of the most enigmatic cartographic pieces from the Bodleian Libraries at Oxford’s collections. The findings are recorded on a newly-launched website

The fifteen-month AHRC-funded project used an innovative approach that explores the map’s ‘linguistic geographies’, that is the writing used on the map by the scribes who created it, with the aim of offering a re-interpretation of the Gough Map’s origins. The provenance, purpose and creation of which so little is known.

Although the identity of the map-maker is unknown, it is now possible to reveal that the text on the Gough Map is the work of at least two scribes: the original 14th-century scribe and a 15th-century reviser. One of the key investigations based on historical reference and the handwriting on the map was to date the map more accurately. The project has discovered that the map was made closer to 1375, rather than in 1360 as was previously thought. 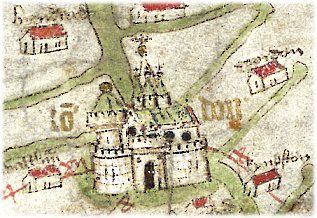 There are visible differences between recorded details in Scotland and England. For example: the text written by the original scribe is best preserved in Scotland and the area north of Hadrian’s Wall, whereas the text written by the reviser is found in south-eastern and central England. The buildings in Scotland do not have windows and doors, whereas in the revised part of the map, essentially everywhere south of Hadrian’s Wall, most buildings have both windows and doors.

Throughout, towns are shown in some detail, the lettering for London and York coloured gold, while other principal medieval settlements such as Bristol, Chester, Gloucester, Lincoln, Norwich, Salisbury and Winchester are lavishly illustrated. One of key outcomes of Linguistic Geographies is to make available online a searchable version of the Gough Map based upon a digital image of the map.

The website features a zoomable, pan-able digital version of the Gough Map – this map is fully searchable and browse-able by place name (current and medieval), and also by geographical features. Once clicking on a chosen location, information regarding that location’s geographical appearance, etymology, appearance on earlier maps, and much, much more is revealed; The website also includes a series of scholarly essays discussing the map; latest news about the project and a blog, among others. 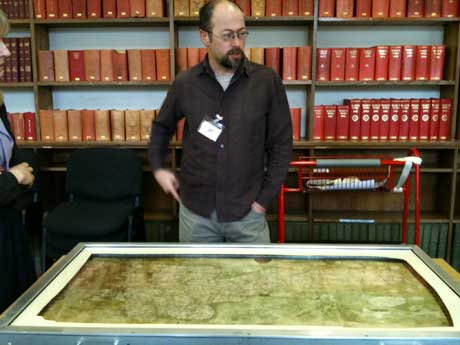 Nick Millea, Bodleian Map Librarian, said: ‘The project team was keen to ensure that our research findings reach the widest possible audiences, not least because maps are enduringly popular objects and always capture the imagination; medieval maps especially. To this end one of the main project outcomes is this web-resource through which the Gough Map is made more widely accessible. We hope this will help others to develop other lines of enquiry on medieval maps and mapmaking, whether in academic or non-academic sectors, as well as provide greater levels of access to the Gough Map, enhancing its world-wide significance in the history of cartography.’

This initiative is an outcome of the collaborative project involving Queen’s University Belfast, King’s College London, and the Bodleian Libraries. Copies of the Gough Map can be purchased from the Bodleian Shop Online. The accompanying book: The Gough Map -The Earliest Road Map of Great Britain? is also available

Additional Note: The Gough Map has been accepted to the UK Memory of the World Register, an online catalogue created to help promote the UK’s documentary heritage across the UK and the world. Registration of the map on UNESCO’s UK Memory of the World Register is part of a worldwide initiative established in 1992 to ‘guard against collective amnesia, calling upon the preservation of the valuable archive holdings and library collections all over the world ensuring their wide dissemination.’ It promotes not only the preservation of, but also access to the UK’s heritage collections and awareness of the nation’s archival resources.

Founder, editor & publisher of the Tasmanian Times Lindsay Tuffin has announced his retirement leaving behind a rich legacy of truth and integrity in journalism