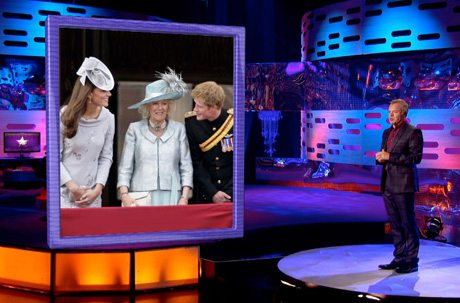 “Thank God we have only seen two of these people naked” said Irish comedian Graham Norton (1963-) when showing his live audience a giant photograph of Prince Harry and the Duchess of Cambridge flanking Duchess Camilla, Prince Charles’s consort. It’s been quite a busy summer in Britain with the Diamond Jubilee, but now its autumn again, and the master live time chat show celebrity host with the light comedic touch and brilliant interview technique is back with a blast.

Series 12 of his BBC 1 popular talk show in the UK is being fast tracked around the world, and so it should. It’s a combination of inuendo loaded dialogue, total silliness, a great deal of naughtiness, with some very blue jokes thrown in from time to time, lots of laugh out loud humour, sensational and sad moments, memorable guest comments and super bloopers as well as good all-around adult nonsensical fun entertainment. 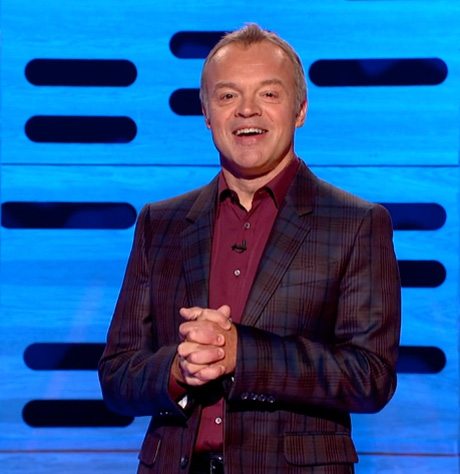 Well that’s how it can appear on the surface for first time viewers, but after watching it for a while you realize that when it all boils down to it by the end of the evening Graham has brilliantly stage-managed everything. It’s all about making his celebrity guests relax so much that they reveal far more about themselves than they probably ever intended to, and we all enjoy that they have such a whole lot of fun doing it.

Graham Norton has risen gradually to be at the top of the ‘class’ interview tree in the U.K., a celebrity circus ‘ringmaster’ with the midas touch, one who has made a glittering career on the back of just being his own very personable and completely flamboyant and outrageous self. My family all agree with our British correspondent, that he’s the number 1 interview host today – and we all, well j’adore him. The Graham Norton Show has, over the past few seasons, reached a pinnacle of a excellence and well-deserved success, judging by those celebrities who now seem to be lining up to sit on his famous red couch, on a set that is defined by its brilliant colours. Graham Norton is above all a great listener, which is a wonderful quality for a talk show host. He’s easy to talk to, engaging on every level, warm and friendly, compassionate and caring to a point, when the ‘camp’ side of his nature often takes over and he comes out laughing. It’s hard, well almost impossible really for his guests not to crack up and enjoy the crazy moments he puts them all through, as he merrily zips through an hour of completely outrageous entertainment.

The first episode of The Graham Norton Show Series 12 began with Arnold Schwarzenegger, Arnie the Governator himself, sitting next to Britain’s funniest woman Miranda Hart and everyone’s favourite funnyman, ‘that’s me over here‘, Ronnie Corbett. Then to top it all off his live musical act for the evening was the sensational performer Usher, causing all the women in the audience to go into momentary meltdown.

Viewers just lap it all up. On the first episode of this series it was important just to sort out what to call the ex Governor of California, he has so many bye lines and tags we all want to employ. ‘It’s your show’ said Arnie generously ‘you can call me what you like’. Graham settled on ‘Arnie’, which was wonderfully casual and familiar.

Arnie got into to it too, revealing how when he was a young man growing up in Austria he had seen a photo of a champion body builder, who had gone on to have a career in the movies.

He decided that was what he wanted to do with his life too and so set out to first build himself into a world famous body builder and from that point then transformed himself into a movie actor. It may seem improbable, but there it is, it really happened.

However it didn’t stop there. He also wanted to give back he said, to the community and to America, the place where he had achieved such success, which was way beyond his wildest dreams. It made him rich and famous in the process and what you have to love about Arnie is that he always says it how it is, warts and all. He must have kept everyone in the Governor’s office in California in stitches over the decade he held down that prestigious office.

He related how as Governor he did not take a salary because it was only ‘petty cash’ anyway, and so he served the Californian people for eight years, being virtually incorruptible because he had nothing to lose. He talked honestly about his marriage break down showing us his humanity, and won a legion more fans in the process. Arnie has indeed gained iconic status in his lifetime and now his family home back in Austria has become a ‘museum’ and it turned out that the curator was in the audience too.

They went to school together Arnie tells Graham,

When they showed off the delightfully proportioned classical Schloss Schwarzenegger where Arnie grew up Graham joked that it looked ‘like Downton Abbey’, much to everyone’s amusement. Out the front it has a huge sculpture of Arnie as the champion body-builder of the world. 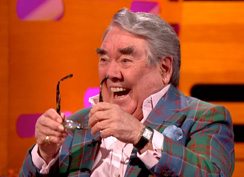 Putting Ronnie Corbett on the same couch with Arnie brought on all the Danny de Vito comparisons, for the movie they made together Twins. At times Miranda Hart, who is a very funny lady in her own right, looked slightly at sea, as she related some of her own hilarious anecdotes, especially her muff on buff moment, which we won’t spoil here.

Corbett is such a card, and the running commentary on the couch was indeed hilarious most of the time. He related how he had met the Queen who presented him with his CBE this year, and how lovely she was to him. This had Miranda jumping in to tell her Queen story, which was far from flattering. Then it was singer, songwriter, dancer, and actor Usher’s turn, belting out a great number from his new album. After all that’s why all the celebrities are there in the first place, to promote their latest film, music video or book.

He joined them all on the couch after his performance and confirmed himself as the all around nice guy we now all know him to be. He’s one of the best-selling artists in American music history, having sold over 23 million copies in the U.S. and 65 million worldwide and has won seven Grammy Awards. And, he’s only 34!

The show’s production is a simple concept really, but one that never fails to bring a smile to your dial and help to kick start the work day week ahead. 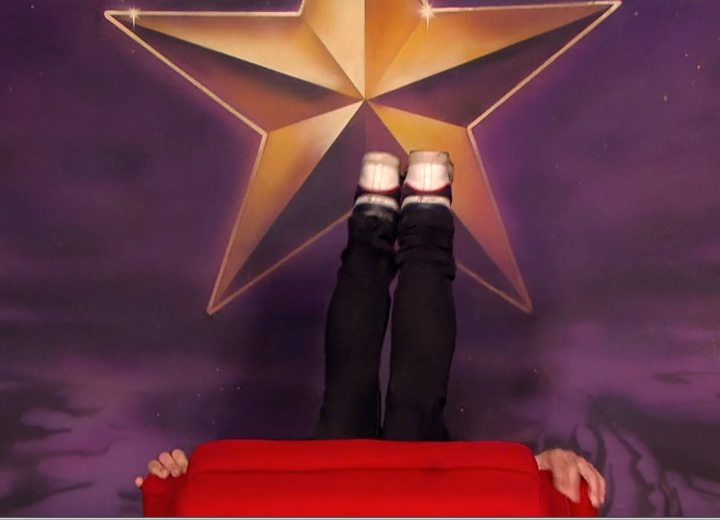 Graham Norton’s couch has seen the most amazing celebrity guests over the past year, and the show’s inevitable ending of everyday people sitting in his dynamic ‘red chair’ to tell us all one of their ‘memorable stories’ either sees them walking away with everyone clapping or Graham ejecting them unceremoniously backwards a*** over t** while everyone cheers. Next week Graham will interview the Skyfall team, Judi Dench, Javier Bardem and 007 himself, Daniel Craig.

Keep it going Graham, you’re definitely on a winning streak.