Exploring the experiences of love and life with a touch of pathos, a wonderful sense of fun, lots of charm and a well rounded solid structure is what award winning writer director, Wes Anderson, a man of true genius is all about.

He moulds and shapes his movies with a quirky voice, ensuring they are full of heart, great gestures, dry humour and stylistic flourishes. Anderson carefully crafts the story of his numerous characters, played by some of the most sensitive of actors on the screen today. They have all been carefully chosen with great affection and love foremost.

Anderson provides his audiences with many moments full of wonder and superbly well-imagined adventures, that when they come to an end makes them simply want to go back and enjoy the experience once more, starting all over again.

His award winning Moonrise Kingdom was my absolute personal favourite movie of 2012, and it went on to become both a critical and financial success.

His next offering, a period movie The Grand Budapest Hotel starts in April 2014 in Australia.

Already the airwaves are a buzz with excitement and the first trailer has been released to tease his fans unmercifully.

This new movie is a rich and wonderful European story, set in the early 20th century in classically inspired Grand Hotel in Hungary, where the story revolves around the tale of a legendary concierge Gustave H, played by award winning British actor Ralph Fiennes, and narrated by his young apprentice and Lobby Boy Zero Moustafa, played by Tony Revolori. Casting Fiennes is a stroke of genius, a rare comedic role for an actor whose sensitive portrayal of so many wonderful characters both historical and contemporary will be sure to reap rewards.

As always Anderson has assembled a superb ensemble cast, with filming taking place in Berlin in an imagined world that while not real, although by the end the one we want to be real.

Anderson fits well into the genre of the ‘indie auteur’, those who with the help of their team of cast and crew, demonstrate they have a clear and creative vision of what they want to achieve and are willing and able to risk their careers and reputations to do it. In an interview in Hollywood recently Anderson said that as a child he was aware that some of the movies he was watching, like The Pink Panther movies, and the Indiana Jones movies, had someone behind the scenes whose complete vision was being realised and that’s the sort of filmmaker he wanted to be.

Indi Auteur’s like Anderson take charge; they find the capital, choose the locations, are responsible for the completion of the project and ensure that it is told with their own voice, fulfilling their own vision of what it should be from start to finish.

Grand European Hotels where the lobby was always bustling and the chandeliers glistening and the concierge unflappable were prevalent at that time to be sure, and Ralph Fiennes, who turns his young charge into his most trusted protégé, will be sure to craft the role of the concierge with great finesse. 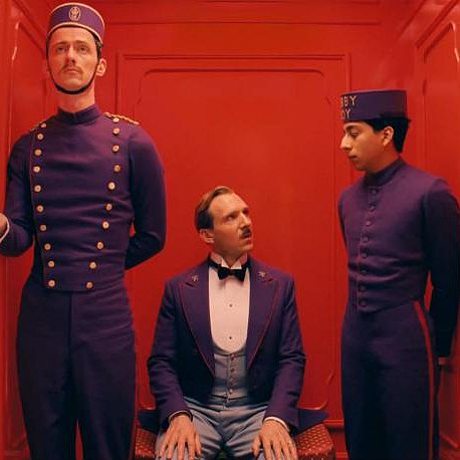 The story line follows the delightfully eccentric Gustave H. and the trials and tribulations he encounters while trying to retrieve a priceless painting he was bequeathed ‘Boy and an Apple’ from the Renaissance period in Europe’s history that has been stolen. Its also about a family trying to save their fortune, hilariously told, during that period of terrible upheaval in the first half of the 20th century.

Many of the hotel’s guests it appears come to stay because of their affection for Gustave H. who always looks after them all so beautifully, especially the women!

Shooting has taken place in a rare architectural gem, the Gorlitzer Warenhaus.

It is an historic department store building standing empty in the city of Görlitz in far eastern Germany, whose small size as a city is disproportionate to its magnificence in terms of its architectural treasures. 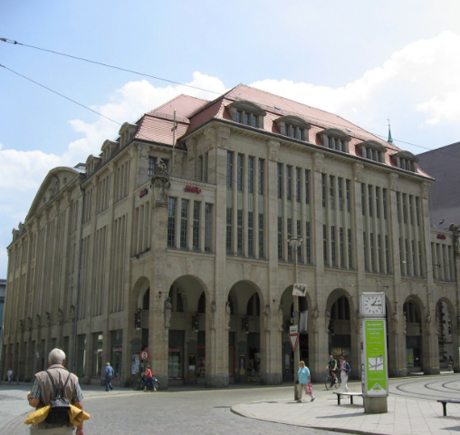 It was young designers in Germany, the Low Countries, Austria, Scandinavia, Eastern Europe and Russia who, at the turn of the twentieth century, allied their work to the simplicity and strength of arts and crafts-type movements.

They were expressing moreover a sophisticated version of the “folk art” influence of their own individual countries.

The building is in the design known as Jugendstil (Young Style), with its combination of straight geometry and carefully controlled organic curves that is very exciting.

The opulent interiors of this wonderful space are just perfect to re-create the atmosphere of a grand hotel of the time.

Every scene will in true Wes Anderson style, be perfectly crafted.

Anderson leaves nothing to chance, he’s very visual and sculpts each scene to reflect all of his ideas so that he can ensure that ‘the world of the story is as entertaining and as vivid or engaging as it can be’. Alexandre Desplat, who also composed the music for Moonrise Kingdom and Anderson’s Fantastic Mr. Fox, will provide the musical score, Scotet Rudin, Steven Rales and Jeremy Dawson are producers and the film will be distributed by the American film distribution company Fox Searchlight Pictures. The Grand Budapest Hotel a film by Wes Anderson, starring Ralph Fiennes, looks all set to be the fantasy hotel in which we would all like to spend some quality time.

Watch The Trailer of The Grand Budapest Hotel

The legendary King of Albion, the oldest name for Britain, is about to feature in the Warner Bros movie King Arthur: Legend of the Sword directed by Guy Ritchie