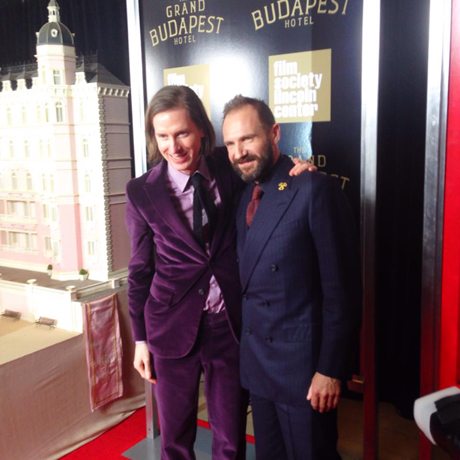 The Best Movie of 2014, there is no doubt, for me 5/5 is not enough to give The Grand Budapest Hotel. This critically acclaimed epic comedic-adventure is now playing across the country!

Don’t read any more if you like surprises best. This is pure adult entertainment, with a capital E.

The Grand Budapest Hotel, award winning American screenwriter and director Wes Anderson’s latest, and what many will consider his greatest movie to date is entirely too superb.

It exhibits achingly wonderful artistry, presents simply amazing visuals with incredible attention to detail, a brilliant script and sensationally sensitive actors who have all been carefully chosen with love.

Anderson is a man of true visionary genius. He moulds and shapes his movies with a quirky voice, ensuring they are full of heart as well as so many marvellous moments that by the end of the movie you are in total meltdown at the wonder of it all. Cinematographer Robert Yeoman, who has shot all of Wes Anderson’s films apart from the animated Fantastic Mr Fox, certainly understands this brilliant man whom he collaborates with so successfully.

Together they create the look of the film, which deserves a permanent place in any great art gallery of the world.

Playing the author of the tale, English actor Tom Wilkinson tells us The Grand Budapest Hotel is the most ‘picturesque, elaborate, and once widely-celebrated establishment’ in the whole of Zubrowka.

Its Chief Concierge Gustave H, a gold plated role for English actor Ralph Fiennes is considered a legend, because he makes sure that everything works with perfect precision. And just like the cast and crew who worked on the set of Wes Anderson’s The Grand Budapest Hotel, they are a family. They all stay in one together in one hotel, in this case in the small town on the Polish border where they meet every night for dinner.

The main shooting for the film took place in a rare architectural gem, the Gorlitzer Warenhaus, a historic department store building standing empty in the city of Görlitz, which is full of architectural treasures.

Gustave H is the head of his hotel family and exceeds excellence in delivering all sorts of services with both style and taste. He also never fails to share the love around, especially with blonde women of a certain age.

Yipee, I am in with half a chance! Gustave H. recites, he raves and he delivers great fragments of verse with such style you feel as if you are aching all over with sheer delight.

My movie buddy and I both fell in love with Monsieur Gustave H and his lucky Lobby Boy Zero Moustafa (Tony Revolori) when we went to see it at our favour local, the Palace Cinema Como.

“What is a lobby boy? A lobby boy is completely invisible, yet always in sight. A lobby boy remembers what people hate. A lobby boy anticipates the client’s needs before the needs are needed”  – so says Monsieur Gustave H, played in an outstanding bravura performance by Ralph Fiennes. Tony Revolori an exotic boy from Anaheim, California with an outstanding face for comedy exudes charisma as he plays Gustave H’s doting lobby boy Zero as a young man. Finding him required an extensive search, which pays off for Anderson in spades.

The Grand Budapest Hotel is certainly the new European destination of all our dreams.

Saoirse Ronan plays Agatha, the lobby boy Zero’s love interest. She lights up the screen whenever she appears and it’s no wonder Gustave H approves their union, they are entirely too delicious together, which is not surprising

She’s the talented pastry chef, whose too divine pastries are delivered in pretty pink boxes tied with baby blue ribbons from the fictional patisserie Mendl’s named for her boss. Her legendary ‘courtesan au chocolate’ will be sure to be everyone’s choice when they hit the market as they are destined to do. Where have they hidden Boy with Apple?...

And, what about that wonderful ‘Renaissance’ portrait of Boy with Apple? It’s sure to take the art world by storm, Sotheby’s it seems are already on the case.

L’Air de Panache Pure Musk – a popular men’s fragrance in Zubrowka, which is the preferred scent of Gustave H was created especially for the movie. It will be sure to be another best seller, although it can be a hindrance if you are on the run from the authorities, who can track you easily by following their nose.

Wes Anderson worked with his friend and fellow writer Hugo Guiness to produce the story, which was inspired by the writing of Stefan Zweig (1881-1942).

The homage to Zweig at the beginning of the movie is an inspired addition, with a whole back story of its own. Wes Anderson, he takes you into a completely new world from the first moment...

Wes Anderson has produced a distinctive script with dialogue very different from any other film you will ever encounter.

There is sheer brilliance to the way he writes his words, which while being unreal in so many ways, become so very real in the hands of the stunning array of seasoned actors he selects to tell the tale.

The Grand Budapest Hotel is all at once, entirely elusive and enduring. Gustave H. with friends and foes...

Most of the people at our session stood and applauded, and one group near us were going out to buy tickets and go straight back in again. I know I will savour it for a few days and then probably do the same

It is probably the darkest comedy Wes Anderson has ever made because it is all about political turmoil, sudden unexplained deaths, dreadful violence and melancholy moments in a place where fact meets fiction.

The cameo performances of all the actors involved in supporting Fiennes and Revolori in this delightful comedic creation are all mini masterpieces.

Anderson and his cast and crew must be nominated for all sorts of awards for this or we will truly know something is wrong with the system. 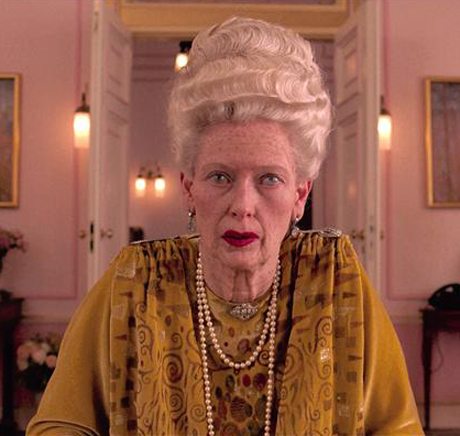 Tilda Swinton as the too divine Miss D.

Madame D (Tilda Swinton), one of Gustave H’s favourite clients, is a millionaire, totally too divine, completely eccentric and, in Gustave H’s words, ‘dynamite in the sack’.

Tilda Swinton in her brief moment proves the D really stands for divine darling. And, we all want the cream they put onto her at the morgue that makes her look like she’s just sleeping in her satin lined coffin, not really dead

She has had a vision of her own untimely demise, which she shares with GH. However he ignores her fears at the time, which he later regrets as he copes with the challenges of the chaos, action and outrageous hijinks that result.

You will recognise so many faces as you chuckle with delight at the roles they are playing, including Jude Law.

He is the fortunate young writer having the terrific tale of The Grand Budapest Hotel told to him by Zero as an ageing bon vivant, played deliciously by F. Murray Abraham.

There will be many people wanting to be inducted into the highly secretive ‘Society of the Crossed Keys’, whose members include Bill Murray enjoying himself immensely.

They all leap to Gustave H’s assistance when he most needs them all. Harvey Keitel, always a gem of a performance

This is when he elaborately escapes from gaol with the help of four of the most delightful prisoners yet imaginable, led by a gloriously tattooed Harvey Keitel, whose half naked cameo scenes are as precious as any gem on earth.

Zero comes along to join Gustave H. and aid their quest to gather up Zero’s lovely fiancée, retrieve Boy with Apple, sell it and with the dosh escape to the Riviera.

This crazy plan is made more wonderful, if possible, by their delicious pause to make a call from a well lit phone box sited superbly in a vast snow bound field.

Edward Norton always revels in the roles Anderson gives him to play, and this time he is the leader of the police trying to track Gustave H down.

They think Gustave H is the one who committed the murder, having been given false clues by the fiendish family who want all the money and art for themselves. The villains of the piece are indeed dastardly.

There is Dmitri, the greedy head of Madame H’s family who doesn’t want Gustave H to inherit anything from his mother, let alone the famous painting Boy with Apple.

He is played brilliantly by Adrian Brody, who looks a spunk dressed in black as does his vicious henchman Jopling played by William Dafoe encased in black leather with nasty looking knuckledusters.

Jeff Goldbaum is the unfortunate lawyer trying to enact Madame D’s original will with its hundreds of extra add ons, although he is unaware, as is everyone else, that there is a second will in existence.

This turns everything and everybody upside down when they find out.

There are indeed not enough superlatives to describe this wonderful piece of enchanting entertainment, which is what Wes Anderson above all sets out to do with all his films. However, having seen many of his others, including the wonderful Moonrise Kingdom last year, to my mind this is his defining work to date.

It confirms his oddball auteur style and his wonderful choice of writing this story for Ralph Fiennes, an actor he has stated he has admired for years.

Surely this will be one of his favourite movie making experiences.

Working with a man whose ability to visualize something wonderful and then bring it to fruition with such a light touch and such a stunning sense of the ridiculous, must have been a marvellous experience.

Repair quickly to your nearest Cinema complex for the treat of a lifetime, The Grand Budapest Hotel. Must stop my rave review now!

Rogue One Director Gareth Edwards has creatively crafted a clever adult Star Wars story, one for all those who remain young at heart, may the force be with you!