‘Gatsby believed in the green light, the orgiastic future that year by year recedes before us. It eluded us then, but that’s no matter–tomorrow we will run faster, stretch out our arms farther . . .’* The Great Gatsby, a movie set in the American Midwest in the spring of 1922, is directed by Australian born award winning and much acclaimed filmmaker Baz Luhrmann. It features Leonardo DiCaprio, Carey Mulligan, Tobey Maguire and Joel Edgerton and will be released on May 10, 2013. Luhrmann intended initially to shoot the movie in New York. However much of the film was actually filmed in Australia, on location at Mt Wilson in the Blue Mountains and various locales in and around Sydney, including Fox Studios.

The scene is the roaring twenties when morals were loose, bootlegging liquor in full swing and jazz the people’s music of choice. This is a story filled with youth and promise during the so-called ‘Jazz Age’, a term the author of The Great Gatsby F. Scott Fitzgerald (1896 – 1940) coined. Today it is considered to be his masterpiece. There have been a number of adaptations of this fine novel, but there are high expectations that this will be one of the best.

Hollywood favourite award winner Leonardo DiCaprio first came to attention in Baz Luhrmann’s brilliant modern adaptation of Romeo and Juliet (1996) playing opposite the now multi-award winning actress Clare Danes (Homeland). As Jay Gatsby, the mysterious millionaire, whose life revolves around his undying love for the woman in his life Daisy Buchanan, DiCaprio will bring his considerable acting skills to bear as well as gravitas to this iconic role.

English actress Carey Mulligan is Daisy. She gained many admirers first in the ‘Keira Knightly’ version of Pride and Prejudice as Kitty Bennett. She won a BAFTA Award for Best Actress in ‘An Education’ with award winning actor Peter Sarsgaard and more recently appeared in the controversial 2011 movie Shame with Michael Fassbender. 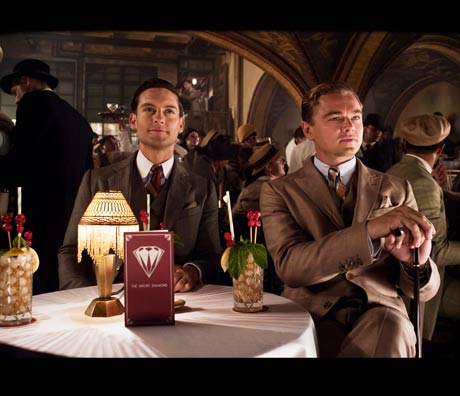 Tobey Maguire plays Nick Carraway a relative of Daisy who provides us all with a running commentary of the shocking times and events that take place.

He is drawn into the world of Gatsby where he witnesses Jay and Daisy’s impossible love story, their incorruptible dreams and the tragedy that provides us with a link to our own times and ‘celebrity’ challenges.

Actor Joel Edgerton plays the key role of Daisy’s vengeful husband Tom Buchanan. During filming he said of DiCaprio “I think he is fantastic … Not that I expected anything otherwise… he is an incredibly level headed, down-to-earth regular guy who happens to be a great actor and one of the biggest movie stars on earth. There are obviously the trappings that go with that but there’s never ever any real indication that he buys into that legend – he’s just really cool and chilled out.”

The book is widely regarded as the “Great American Novel“, a literary classic, capturing the essence of an era and the post-war “carefree madness” of a nation hungry for life. 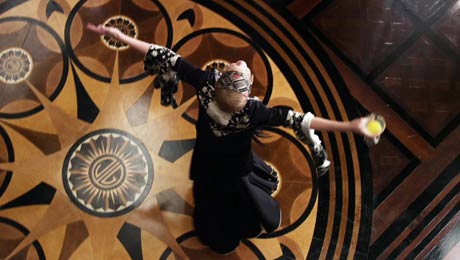 In the novel Gatsby, who is exceedingly rich lives in a mansion, ‘a factual imitation of some Hotel de Ville in Normandy, with a tower on one side, spanking new under a thin beard of raw ivy, and a marble swimming pool, and more than forty acres of lawn and garden’.

Fitzgerald’s wonderful descriptive passages in his novel provide an imagined visual feast for the reader and for that matter anyone wanting to bring his novel to the screen. There is no doubt Luhrmann has lingered long and lovingly in doing so, as he recreates the luxurious and lavish louche lifestyle of the rich and famous between World War I and II. The ‘Jazz Age’ when the ‘Art Deco’ style was in full swing, was an extraordinary period in history. Enormous wealth generated first by the Industrial Revolution before the first war had been followed by the many advances in every aspect of art, design, science and technology during World War I.

After the war the world exploded in a multitude of commercial opportunities that catered to the desire of an all-new youthful society who were clamouring to live life in, and for the moment following the shell shock of it all.

Tiffany & Co provides the jewellery of choice for Gatsby women in the movie so is sure to gain a whole new legion of fans. F. Scott Fitzgerald himself was a Tiffany & Co Customer and knew Louis Comfort Tiffany the brand’s first design director. He also actually ran with the ‘Long Island’ social crowd portrayed with great accuracy in the story. Tiffany’s as well supplied the china, sterling silver flatware and other amazing accessories for the interior of the Gatsby estate.

Warner Bros Pictures, which is backing the film, is quoted as saying Luhrmann will “create his own distinctive visual interpretation of the classic story, bringing the period to life in a way that has never been seen before.” That includes a fleet of fabulous vintage cars, including a pair of 1929 Duesenbergs and a 1929 Packard rumored to be worth some $3 million each. Duesenberg Automobile & Motors Company was an American manufacturer of luxury automobiles from 1913 – 1937 when its main owner and shareholder E.L. Cord ‘s financial empire collapsed during the Great Depression.

Its product was billed as ‘The World’s Finest Motor Car and it gradually became a status symbol for the rich and infamous, including mafia boss Al Capone, Actress Greta Garbo, Eccentric millionaires Howard Hughes and William Randolph Hurst as well as the Duke of Windsor and other royalty in Europe.

The buzz around the making and release of the film on May 10 is now building to fever pitch, as fans grow impatient for its release.

Its long anticipated arrival will bring to an end all the hype that has surrounded this, landmark production of one of America’s favourite novels

‘When I looked once more for Gatsby he had vanished, and I was alone again in the unquiet darkness’*

The Australian Government and NSW Government have both been involved in supporting the making of the film by providing financing. Village Roadshow Pictures will distribute the film in 3D and 2D by Warner Bros. Pictures, a Warner Bros. Entertainment Company, and in select territories. Adapted from the Novel by F. Scott Fitzgerald

Salli Sixpence Flying Pretty Show at the Lethbridge Gallery save for the tweak of a beak or the warp of a wing, presents the penultimate in botanical wall bling