Be prepared to be dazzled by the latest extravaganza created by Baz Luhrmann and Catherine Martin, The Great Gatsby.

This their fifth movie, shot in 3D, has all the makings of a grand production, opulence on a megawatt scale.

As I predicted last year in my first ever Fashion Elixir story, Thoroughly Modern, the twenties and this film will have a huge influence on fashion this year.

I can’t wait to see their interpretation of F. Scott Fitzgerald classic tale of love, loss and betrayal, all set in the roaring 20’s.

Helping the dynamic duo, Baz and Catherine, bring the decadence of the Jazz Age to life, are the iconic jewellery house Tiffany & Co and fashion designer Miuccia Prada. I imagine the master craftsmen at Tiffany must have been so excited to be let loose with some of the most glorious gems in the world.

With Catherine Martin’s exceptional eye for detail, this collection will indeed be “sigh” inducing.

How amazing to have access to the catalogues of one of the most respected houses in jewellery, it must have been hard to edit for this collection.

Diamonds, pearls, onyx and precious stones bring to life the colour and decadence of the the period. For the first time there was a freedom in fashion and life, although being a flapper was not for the fainthearted! Gangsters and bootleg booze were abundant in speakeasies and underground gin joints between 1920 to 1933 when prohibition reigned in the USA. Women bobbed their hair in the style of Louise Brooks and Clara Bow, the original “It” girls.

Statements were made with hairstyle, clothes and jewellery.

The Jazz Age saw a frenzy for pearls, ropes of them, and Tiffany’s was THE place to buy them.

Two of the most stunning pieces made for the character Daisy Buchanan, played by Carey Mulligan are the richly embellished “Savoy headband” and the heavenly hand ornament consisting of small pearls that encircle the wrist, join to a magnificent platinum and diamond piece that runs down across the back of the hand, gathering to a diamond ring.

The Savoy headband is a ravishing bandeau of cultured pearls and diamonds, featuring a detachable floral brooch. These pieces aptly sum up the opulence of the era.

Art deco style rings set with sapphires and tanzanites are radiant, and I love the Deco fan bangle. Tiffany craftsmen rendered a fan motif in black laquer and 12.97 carats of diamonds hand set in platinum, fabulous!

All up there are 45 pieces featured in the film, a feast for the eyes! The guys get a look in too, with fantastic sterling silver and enamel cufflinks, signet rings and flasks.

If the jewels aren’t enough, then add Prada to the mix. Miuccia Prada collaborated on 40 costumes for the film.

This is the second time Baz and Miuccia have worked together, the first being for his 1996 version of Romeo and Juliet, when she designed a suit for Leonardo DiCaprio.

How apt that they are all working together again, all masters in their chosen professions.

Again Daisy gets to wear the piece de resistance, in the form of a magnificent “chandelier” dress re created from Prada’s 2010 collection, featured on the cover of May 2013 Australia Vogue.

This is bound to be a showstopper.

In her costumes for the two big party scenes, Miuccia chose to capture the spirit of the age rather than replicating it to a tee, which I think is perfect for Baz and Catherines stylised world of the 1920’s. Fringes shimmy and sway at the mysterious millionaire Jay Gatsby’s extravagant parties, the music is loud and the champagne flows freely. 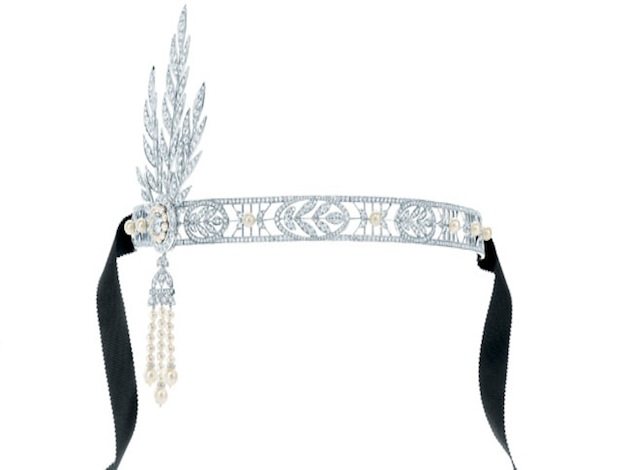 The Great Gatsby will be dazzling in the detail, from the sets and costumes, down to every last nuance of the era obsessed with money and power.