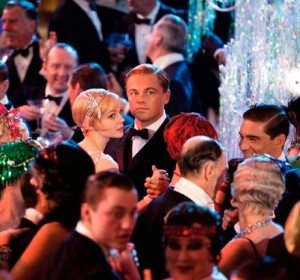 Baz Lurhmann’s opulent version of F. Scott Fitzgerald’s classic “The Great Gatsby” is a triumph. From the opening credits, he had me swept away, in the story of a mans unbridled obsession and the lengths he will travel to secure that possession.  Duo Baz Lurhmann and Catherine Martin’s creative prowess never ceases to amaze me. The incredible eye for detail is spellbinding, from the sets and costumes, down to the soundtrack. Combined, it sums up the decadence that was the roaring twenties, specifically in New York City and Long Island. The parties were debauches and the champagne flowed!I feel Baz is a true romantic, in the old fashioned movie maker sense of the word. I love musicals and movies from the 40’s and 50’s, and I think he is the Ziegfield of our age. Why not make opulent movies? Why not make visual feasts? I adore his sensibilities, he can indulge me any time. 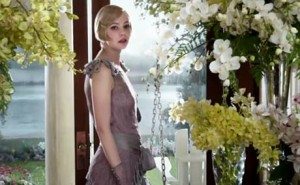 In an age where most movies rely on drama, sex and death in a dark depressing way, Lurhmann is giving us all that and more, but with an eye for beauty. The actors, superbly cast, Leonardo Di Caprio is exceptional as Gatsby, the man with a secret. Brilliantly wound up like a clock, desperately waiting for his Daisy, played by the beautiful Carey Mulligan who nails Daisy, the ethereal socialite, always on the edge of despair. In the scene where the two meet after five years apart, there is a palpable tension, captured beautifully by both parties.

Toby Maguire’s ‘Nick’ Carraway, the man through whose eyes the tale is told, is excellent. Caught within a web of secrets, on both sides, what starts off as a gentle naivety, ends with the realization that his life will never be the same. It’s a “spot the Aussie” star throughout, which I loved. 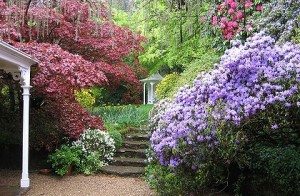 Jewels by Tiffany & Co, 40 costumes by Prada, a stellar cast and magnificent locations all make for a true classic. “Breenhold Gardens” in Mount Wilson, N.S.W Australia, is exquisite as Nick Caraway’s patch, next door to Gatsby’s great pile. Mesmerizing from start to finish. A true classic! Six stars from me!

Design in architecture reached a zenith at Athens in the fifth century. It is a place where artists were caught between the meeting of the human with the divine