Titian Venus rising from the sea (Venus Anadyomene) c1520-25, oil on canvas, © Trustees of the National Galleries of Scotland

The Art Gallery of NSW (AGNSW) currently has over seventy of the greatest paintings and drawings by such well-known artists as Botticelli, Raphael, Titian, Rubens, Velázquez, Poussin, Rembrandt, Vermeer, Turner, Monet, Degas, Gauguin and Cézanne. They will be on show until 14 February, 2016.

The Greats: Masterpieces from the National Galleries of Scotland is an exhibition spanning some four hundred years of world history. It represents a period of great cultural change in our world when there was a renewal of interest in classical antiquity.

The Greek Goddess of Love Aphrodite, known as Venus to the Romans, depicted by many artists rising from the sea (Venus Anadyomene), transcended the study of proportion, perspective and anatomy.

She stood at the very foundation of art itself.

Tiziano Vecelli or Tiziano Vecellio (c.1488/1490-1576), known in English as Titian born in the water bound republic of Venice revealed his Venus around 1520-25 as one of those well-rounded females known for helping to perpetuate the family line.

He made the ideal appear real, like a beautiful celebrity at her bath, and it is only the small scallop shell in the bottom left hand corner that gives away her identity as a mythological fantasy. Sandro Botticelli, The Virgin adoring the sleeping christ child (The Wenyss Madonna) c1485, tempera, oil and gold on canvas, © Trustees of the National Galleries of Scotland

Ancient Romans esteemed the married state and great families in Florence like the Medici as well as patronising great artists effectively rehabilitated marriage.

Historian Poggio Bracciolini (1380-1459) Chancellor of Florence in 1453, declared that ‘marriage preserved a man from licentiousness, and that a husband no longer young had the advantage of full experience and therefore able to train his younger wife to limit her appetites’.

Her views however, were not recorded!

This is the first time the majority of these works have been exhibited in Australia.

Italian artist Alessandro Filippi, better known as Sandro Botticelli produced an image of the Virgin Mary wearing the blue robe that allows us to recognise it is her.

She is revealed adoring the sleeping Christ child in a work painted around 1485, which has not left the United Kingdom in 169 years.

This image has a big back-story, including being rescued in 1999 for the nation, with the help of the largest grant The UK Art Fund had ever provided until that time.

Painted during the period when religion that had ruled supreme for centuries in Europe was being held up for close examination, blue became the colour associated with Mary because it reflected the heavens from where her baby came.

They have both been placed in an enclosed garden featuring roses, acknowledging that she was known as the Mystic Rose, a paragon or one without peer. 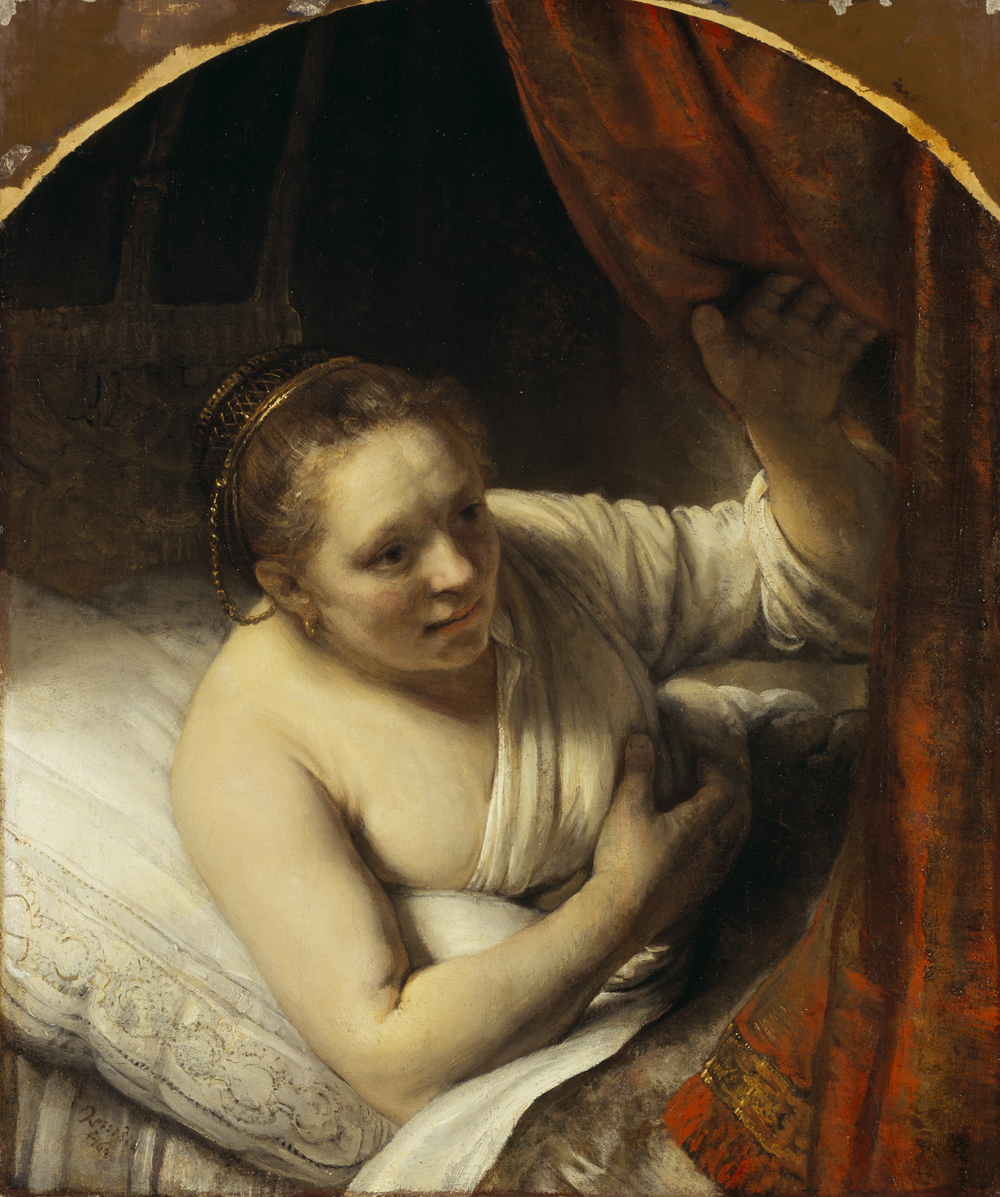 Rembrandt van Rijin, A Woman in Bed 164, oil on canvas, © Trustees of the National Galleries of Scotland

The Rosary, whose beads were originally made of ground rose petals and rose oil were for meditating on the mysteries of Jesus and his mother.

Director of the Art Gallery of New South Wales Michael Brand, commenting on the show noted that “The Greats is a statement of unequivocal artistic excellence – each piece in this exhibition is of extraordinary quality. We are excited to provide Australian audiences the rare opportunity to come face to face with such unique and masterful artworks” Brand said.

Visitors will experience interiors inspired by the Edinburgh galleries own. There is a variety of public programs on offer for all ages including guided tours, a lecture series, late night programs and more.

From the fifteenth to the nineteenth century as great written works were uncovered in monastery libraries all over Europe western civilisation re-examined and re-affirmed its beliefs and values.

This included the effectiveness of personal freedom and liberty.

The way religion was re-interpreted was held up for close examination, bringing about the rebirth of the individual and awakening a desire for beauty Claude Monet, Poplars on the river Eple 1891, oil on canvas, © Trustees of the National Galleries of Scotland

This in turn created a new dawning of consciousness in the natural world around us, which would not abate until the late nineteenth century in France, when Camille Corot, Claude Monet, Paul Cezanne and others captured its essence with first and lasting impressions. Central to artistic expression throughout history the human figure has always been essential for contemporary artists in each age to record, as they proclaim a range of emotion and narrative for us to better engage with the work.

An Old Woman Cooking Eggs by Diego Velazquez, A Woman in bed by Rembrandt van Rijn, help us to keep it real, while 18th century French artist Jean-Antoine Watteau, catering to the pleasures of the imagination, gives us a scene of Venetian pleasures.

He rendered the sophisticated pleasures of the beau monde poetically and his vision and personal preference for worldly elegance was widely emulated.

His delicate palette of colours and sensitivity had been much admired during his short lifetime and would have a great influence on form and stylistic change well into the future.

Fashionable late nineteenth century American artist John Singer Sargent (1856-1925) portraits were praised for their ‘simplicity and dignity’ and judged ‘in the true spirit of the old masters’.

The list of people that he painted read like a who’s who of the rock star celebrities of his time,

They revolved in circles he mixed in easily, whether in a palazzo, palace, salon, studio or ‘en plein air’. His virtuoso brushwork, infused as it is with his continual brush with Monet and impressionism is evident in his Lady Agnew of Lochnaw c1892. The Lady of Lochnaw is indeed beautiful with her jet-black hair contrasting with her fine alabaster skin, giving us a romantic impression of aristocratic elegance.

Sargent had a wonderful skill for painting textures and rendering white, which was nuanced beautifully with the addition of soft tones of lavender, blue and pink, delineated her elegance and showcased her refinement of both taste and style.

His eye for composition, colour, and ability to capture the beauty he saw is second to none, and he became a master in his own right, expounding a whole new informality in art that became a symbol of our contemporary life today.

The Greats: Masterpieces from the National Galleries of Scotland

The head of state for the early Republic of Venice was the Doge. The Palazzo Ducale, or Doge’s Palace is Venetian Gothic characterized by the spontaneous imagination of the stonecutter. It has features of mainstream Gothic such as the pointed arch, vaulting, windows and portals with quatrefoils and trefoil details….