An engraving of a detail of the cavalcade of Horsemen from the west frieze of the Parthenon at Athens is a powerful image.

The Panathenaic procession was an annual celebration in Athens during classical times, recorded in picture stories on the sculptural frieze.

Its iconography features the natural world and human being as a ‘divine entity worthy of exploration and immortality through the arts’.

Playing an important role in the evolution of society and culture, The Horse has been a noble steed and man’s best friend for millennia. 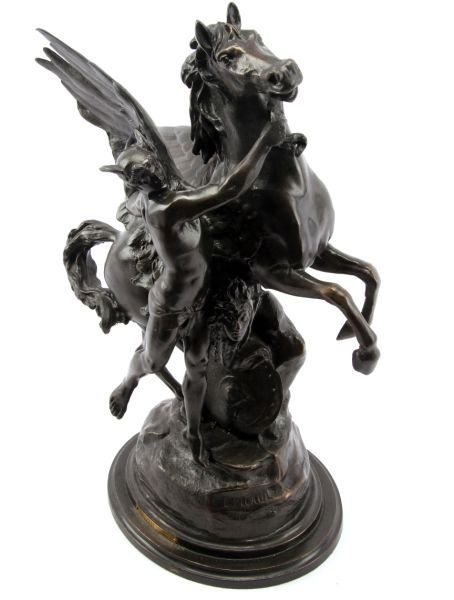 Émile Louis Picault (French, 1833-1915), artist of the École des Beaux-Arts, bronze, sculpture Pegasus 1888 with Perseus shown after the slaying of Medusa with her head, Hades’ Helm of Darkness, and Athena’s shield.

Encyclopedic in scope, an enlightening Exhibition at the National Gallery of Victoria 14th August to 8th November will celebrate the ‘Wunderkammer’ of The Horse.

Their story will be explored in artistic, historical, societal and cultural context and ranging from horse racing to the glamour of equestrian imagery in today’s fashion world’.

This includes stunning imagery from ancient Greek vases to photographs and major oils on canvas with saddles, sculptures, riding gear and including a Melbourne Cup.

In Greek mythology Pegasus was the incredible winged horse that emerged from the blood of the Gorgon Medusa, slain by the son of the great God Zeus and Danae, the daughter of Acrisius of Argos, the Greek hero Perseus.

Another Greek hero Bellerophon captured the fabulous steed and his flight with him into the heavens became symbolic of the soul’s immortality.

Pegasus’s story became a favourite theme in Greek art and literature. He served Perseus until his death and afterward went to the home of the Muses, the water that gave the Muses their inspiration had dried up and Pegasus stamped his hoof and created a spring.

The chief characters attached to his legend Perseus, Cepheus, Cassiopeia, Andromeda and the sea monster Cetus all are represented in the night sky as constellations. George Stubbs, Horse being attacked by a Lion, courtesy National Gallery of Victoria

Drawn from the holdings of each department within the National Gallery of Victoria‘s collection, the exhibition will celebrate this magnificent animal through works spanning a 3000 year period.

The acquisition of the most outstanding equine English artist of his time George Stubb’s ‘lion attacking a horse’ by the NGV in 1949 has provided generations of Australians with an insight into the Romantic view of the school of artists he belonged to.

George Stubbs (1724-1806) was one of eighteenth century England’s foremost recorder of horses, producing at least seventeen works on this theme he was obsessed about and he made studies of caged lions at the Tower of London to achieve accuracy. Stubbs provided viewers of his work with a way of accessing the English countryside in a sublime encounter, one also important for early Australians.

Depicting The Horse and his importance in their lives throughout history has been a considered aim, particularly of ancient man who owed his life and livelihood to the great bond and trust they forged with each other. The first images we have of horses can be found on the walls of a complex system of caves at Lescaux in south western France, where there are 364 known cave paintings of equines.

In Australian history our early and continuing association with the bush is at the heart of what makes us tick and our love for The Horse. Phar Lap a giant horse with a giant heart galloped his way into the hearts of millions of ‘Aussie battlers’ by winning the Melbourne Cup in 1930 during the depression.

Having won twenty seven races from thirty starts punters relied on him and when he was taken to America to race in the Agua Caliente Handicap, the world’s richest race at the time in 1932 the whole nation wept when he was found dead in his stall.

During the first decade of the twenty first century finally scientists proved conclusively he had been poisoned as suspected at the time, the results obtained from his preserved hide, heart and bones preserved for posterity following his death. Australia’s legendary author, journalist and bush poet A.B. Banjo Paterson wrote a poem about the daily lives and struggles of bushmen, shearers and drovers in rural farm country that struck a chord.

There was movement at the station, for the word had passed around
That the colt from old Regret had got away,
And had joined the wild bush horses – he was worth a thousand pound,
So all the cracks had gathered to the fray.
All the tried and noted riders from the stations near and far
Had mustered at the homestead overnight,
For the bushmen love hard riding where the wild bush horses are,
And the stockhorse snuffs the battle with delight. The Birdsville Race Day in the Australian outback is a quintessential event and experience that should figure high on any Aussie’s bucket list.

The thundering hooves on the dirt track, the cheers of the crowd in the back of beyond, the beers that just fell off the back of a truck and the dust, well the dust makes it a unique event as it invades every nook and cranny of your body.

So Clancy rode to wheel them – he was racing on the wing
Where the best and boldest riders take their place,
And he raced his stockhorse past them, and he made the ranges ring
With the stockwhip, as he met them face to face.
Then they halted for a moment, while he swung the dreaded lash,
But they saw their well-loved mountain full in view,
And they charged beneath the stockwhip with a sharp and sudden dash,
And off into the mountain scrub they flew. In battle and in times of peace, The Horse has proved an invaluable asset for those who owned one. Today in Australia the contribution of horse racing to the Australian economy is over $6.2 billion dollars a year, so its a serious industry demanding our respect. Racing and associated activities (breeding and wagering) contribute a little over half, horse businesses, equestrian events and breed events and the maintenance of horses are very large industries in themselves.

Supported by the Victoria Racing Club and Sofitel Luxury Hotels the Exhibition at the NGV International is the perfect showcase for the Horse and Melbourne Cup, held on the first Tuesday in November. And he ran them single-handed till their sides were white with foam.
He followed like a bloodhound on their track,
Till they halted cowed and beaten, then he turned their heads for home,
And alone and unassisted brought them back.
But his hardy mountain pony he could scarcely raise a trot,
He was blood from hip to shoulder from the spur;
But his pluck was still undaunted, and his courage fiery hot,
For never yet was mountain horse a cur.

Floor talks by Dr Ted Gott, Senior Curator of International Art at the National Gallery of Victoria will be part of the opening weekend on the 15th August, 2015.

httpv://www.youtube.com/watch?v=gXDMoiEkyuQ&feature=player_embedded#! Author, photographer, painter and keynote speaker Elizabeth Murray in California sent me the link to this beautifully filmed video presented at the TED conference 2011. TED is all about ideas worth spreading.  This presentation was given by Louie Schwartzberg award-winning cinematographer, director, and producer. His notable career spans more…