The Imitation Game,” is based on the book “Alan Turing: The Enigma” by Andrew Hodges and was the finale film for the 2014 Emirates British Film Festival at Palace Cinemas in Australia. It will be generally released in January 2015.

Alan Turing’s genius and skill for mathematical puzzles, understanding ciphers and breaking codes, would become the key to the allies finally winning the dreadful conflict against Hitler, who was overrunning Europe in WWII.

Turing was a very different kind of genius in a world where being different was only greeted with suspicion, envy and hatred. He suffered much before and after the war, including chemical castration in 1951. This happened because he was discovered by the beat cops to be a homosexual following a burglary in his home. He became a victim, his name and his deeds forgotten, seemingly expunged from history.

Turing became the most disrespected British hero of World War II, finally receiving a posthumous pardon for the convicted crime of homosexuality given by Queen Elizabeth II in 2013. Just too little too late.

The very Government that employed him to save the world, which he did, imposed chemical castration on this hero, ultimately destroying both the man and his mind. Reuters reported Cumberbatch after being offered the role said, “It is such a heart-wrenching true story, one that needs to be heard – there is an urgency about presenting it to the world” he said.

‘sometimes it’s the people no one imagines anything of who do the things that no one can imagine”.

Defined and directed with skill by Morten Tyldum, English actor Benedict Cumberbatch best known for his roles in the TV series “Sherlock” and the villain Khan in Star Trek, is at his most brilliant and moving.

The cast and crew also brilliantly support his lead role as Alan Turing.

Cumberbatch’s truly extraordinary ability to ingratiate himself into the character of the most maligned English hero in history, is always mesmerizing and completely captivating.

Cumberbatch digs down to the depths of his soul to reveal succinctly this clever man’s difference and disabilities, his heartbreaking vulnerability, his innocent arrogance, his clear and succinct intellect, his alarming honesty and a truly amazing energy to get the job done.

He showcases Turing’s complete conviction he could succeed and the courage he needed to do so.

He embraces and presents the true essence of this misfit man by ‘thinking as him’, a huge task and a great responsibility that you can tell he felt deeply.

I realised how much I had been affected when at many points I discovered tears streaming own my face silently, as I came to understand this man who had suffered so much injustice.

Cumberbatch will deserve the multiple awards he should win. This is a memorable performance and a perfect ten doesn’t seem enough to give. Director Morten Tyldum who presents the movie in three time frames; before, during and after the war, believed the role of Alan Turing was tailor made for Benedict Cumberbatch.

His clever way of relating his story created suspense and also revealed the amazing contribution by all involved. The cast members were each charged to deliver a special piece of the puzzle that was Turing’s life and do so with great skill. For me this is Knightly’s best role to date since her brilliant performance in A Dangerous Method, because as Joan Clarke she is just right with her interpretation of the perfect female foil for Turing.

Joan Clarke was different too, a fact her parents totally misunderstood. She completed a clever crossword Turing publishes in The Times to flush out geniuses, who may be able to help him in his task. 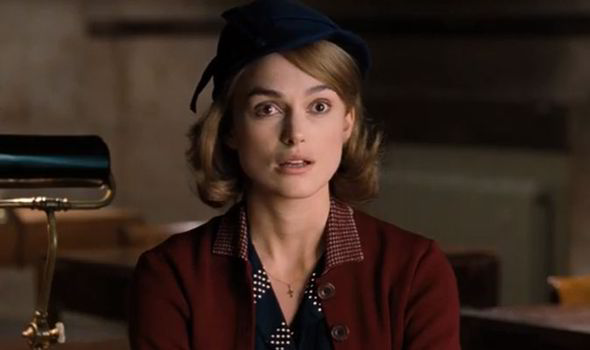 She turns up for a special test he sets suffering discrimination and humiliation as she’s turned away at the door because she’s a woman. But she creates a fuss and Turing invites her to join the candidates.

She sets about deciphering the puzzle Turing set his ‘winners’ and she completes his task by solving it in under six minutes, when it actually took him eight.

Topping the class means that he has to go through a lot of subterfuge to help her accept his offer and join them. Cumberbatch’s levity here is delightful.

Keira Knightly as Joan Clarke is masterly as the one woman in Turing’s life who not only understood his frailties but also was prepared to support him and them by becoming his wife. She sees them both as misfits making their way in the world and it would be better if they did that together.

He ultimately realizes he cannot let her make such a sacrifice in helping him to hide his sexuality. So he confesses he is gay, which she knew anyway, but despite her pleading that they will be good for each other, he coldly sends her out of his life.

She comes back into it towards the end wanting to help him when she finds out about his persecution and conviction. By then the chemicals he is digesting to castrate himself, rather than go to jail, are already eating into his great mind. Charles Dance features as Naval Commander Denniston who doesn’t like Turing’s difference and hounds him because he goes over his head to Winston Churchill when his immediate Boss won’t provide the funds to build his machine.

Turing asks who his boss is and writes Winston Churchill a letter to convince him he can complete his task. Being ordered by his commander in chief to allow Turing the lead role in deciphering the code doesn’t go down well with Denniston , and so he becomes determined to bring Turing down.

He doesn’t realise the small team Turing has around him, and had hated his difference when he first arrived, had not only come around to his way of thinking, but also now actively supported his efforts.

Matthew Goode as Hugh Alexander and Allen Leech as John Cairncross stand out, as does the head of the mysterious MI6 Stewart Menzies played by Mark Strong. Menzies believes Turing is the only man they have got capable of cracking the code. Being the original spymaster, he convinces us all he truly is, at the end of the day, a cold calculating villain capable of manipulating everyone.

Then there is Rory Kinnear, playing the gentle Detective Robert Knock who shows Turing some empathy. It is to Knock Turing tells his amazing story, which sadly leads to his conviction on the charges brought to court by the coppers who hate the idea of a man being ‘different’.

Without doubt the young man who plays Alan Turing as a student at high school is truly defining. Alex Lawther now aged 18 is awesome, and he helped us understand why as an adult Turing is as he is and why he calls his ‘computing machine’ Christopher. The tale waited to be told as Alan Turing’s secret machine and life story lay buried in the archives of British War history until released after 50 years. Gradually the story has finally came to light and the enormity of his contribution has become known.

There had been rumours in the decade or so prior to the files being released, as other stories about the formation and operation of ‘secret services’ during the war were coming to light as those involved were ageing, dying and passing previously sworn secrets along.

That’s when we found out that in just two short years not only had Alan Turing performed the impossible, but had also shortened the war by two years or more, saving literally millions and millions of lives in the process.

The mind boggles at what our world would have been like without Alan Turing. Vive la difference seems such a hollow statement after the fact. It was at the secret location of Bletchley Park, a country house in the English countryside disguised as a radio factory that Alan Turing’s small team of mathematical wizards and cryptologists were seconded with teams of brilliant helpers to race against time to crack the most complex code ever invented

The German invented Enigma machines were transmitting important information to the German’s sea forces and the Enigma puzzle was considered an impossible task for the human mind to surmount. Alan Turing’s machine deciphered complex codes broken first in 1938 by Polish code experts, The Germans knew what the Poles had achieved and so began continually changing them.

By 1941 when this movie starts as Turing arrives at Bletchley, the codes were so complex they were considered unbreakable.

Fortunately the Polish Bureau had shared their secrets with the British in 1939 when they knew it was a fait accompli their country would be invaded first. It was Turing who imagined that only a machine could beat a machine and had the vision and commitment to set about designing it and building it, despite fierce opposition at first from his colleagues, and by the British high command.

The small handful specialists who worked with Turing were given an impossible time frame. Each day at midnight the German’s changed the way the code worked, meaning the English only 24 hours to work it out.

The machine Alan Turing developed to work the million and millions of possible calculations faster than a man could possibly perceive let alone achieve, ensured that today Turing has assumed his rightful place in history as the key architect of the modern computing system. This is the best movie I have ever seen said one of my small group of different movie buddies afterwards as we shared a meal to discuss how we connected to the story.

We were all very emotional, admitting to being teary at times and struggling to finding the right words to describe what the story meant to each of us personally and professionally.

Turing deserves to be the hero he is now to all those who enjoy their interaction with technology on a daily basis. We all agreed The Imitation Game 2014, Director Morten Tyldum and actor Benedict Cumberbatch and his team had honoured his work’s importance and his achievements.

Thank heavens too that Andrew Hodges wrote the book and that Graham Moore penned the masterful screenplay.

Only good men go to war and behind every code, and indeed every good man, is an enigma.

Cumberbatch in deciphering difference in such a moving and mesmerizing way, let us truly believe that

‘sometimes it’s the people no one imagines anything of who do the things that no one can imagine”.