“A man may die, nations may rise and fall, but an idea lives on‘*

The Kennedy’s were the pre-eminent American political family of the 20th century and memories surrounding the assassinations of two of its most prominent members are indeed still raw and will probably remain so for a long time to come. A new eight part mini series “The Kennedy’s” aired last night on ABC in Australia. Over the past six months it has created much debate about its accuracy and/or political correctness, perhaps more than any other show in television history.

The controversy surrounding this miniseries started as soon as they announced it was going to be made. Despite producers having the History Channel sign off on scripts for each episode in the end they backed out of screening the series, leaving it to be taken up by much braver souls. 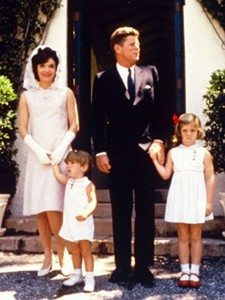 The Real Kennedy's JFK, Jacqui and their children, Caroline and Jo

The Kennedy dynasty and their power is not just about perception, it is still today very real and very influential.

As in most families of their size by the beginning of the sixties their social and moral mores and concerns had been formed during a period that included two major world wars and a great depression challenging anyone’s beliefs in Christianity. For them, and indeed most other families of this time, it was always a case of ‘Father Knows Best’. The patriarchal head of the Kennedy dynasty was Joe Kennedy, who at least according to this presentation, was surely one the most famous control freak fathers in recent history. JFK and his brother Robert got to play out their father’s ambitions and plans for their lives and the dynasty on the world stage and while short, they were both memorable and meaningful.

‘I just received the following wire from my generous Daddy; Dear Jack, Don’t buy a single vote more than is necessary. I’ll be damned if I’m going to pay for a landslide’.*

Joe Kennedy’s massive wealth when his second son John Fitzgerald (Jack) Kennedy (JFK) (1917 – 1963) was elected to serve his first term as the 35th President of the United States of America was huge, said to be between 300 and 500 million dollars. In telling their story separating the personal from the political is a huge ask. Their families were an important aspect of their image to the world at large. Did John F. Kennedy’s character and personal life affect his decisions in regard to his policymaking? This is open for interpretation in a series in which the storyteller is free to be, and most probably bound to be, wrong. 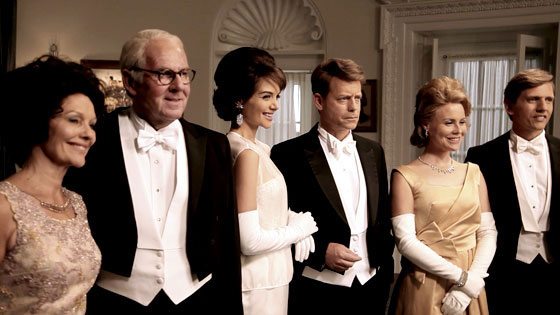 Producer Michael Prupas has defended the historical accuracy of his show. He is reported as having said

“All who worked on the production made every effort to faithfully and honestly tell the Kennedy family story,”

“We meticulously researched all story points and made sure they were supported by multiple respected and objective sources. We are confident that we accurately and authentically recreated each of the events that occurred,”

Prupas will also come under fire for leaving so much out of this eight part series that basically focuses on JFK, Bobby, Jacqui and Jo. Making decisions about who and what to leave in or out, including the rest of the family it seems would have stretched its already huge budget big time. For instance there is no time given over to the space race, surely one of the most significant historical events or, for that matter the Vietnam war, surely one of the most shameful wars in world history Just how the cast of this most talked about series ever will ever gain a fair assessment of their acting abilities, with the state of controversial play around them, is challenging to say the least.

‘I think this is the most extraordinary collection of talent, of human knowledge, that has ever been gathered at the White House – with the possible exception of when Thomas Jefferson dined alone’.*

Greg Kinnear plays JFK. He is an actor who showed much promise alongside Harrison Ford in Sabrina and with Helen Hunt and Jack Nicholson in the wonderful, As Good as it Gets both  made during the 90’s. He certainly has the look, the voice and the mannerisms of John F Kennedy down pat. Although in some scenes in this first episode he looked at times uncomfortable in his own skin, he manages in the end to spread his charms widely and wisely.

The revelation JFK was receiving amphetamine injections for debilitating pain most of the time he was in the White House, from a condition called Addisons disease, will only endear him more to the millions that still form his very wide fan base. His innate understanding of what liberty and justice for all meant, was in reality well defined and inspiring even if we only get a small sense of it here.  If you were around when he was giving his incredible speeches or observatioons on life, you could not help but admire him.

In terms of history his achievements politically, economically and historically for the USA between 1961 and 1963 are more than impressive. Acceptance of his exploits outside his marriage to Jacqui were part of what society accepted at that time, a leftover attitude from aristocratic Europe during the Industrial age. An attitude most women post World War II were well schooled by their mothers to turn a blind eye to, especially if they wanted to hold onto their family and marriage.

Barry Pepper playing JFK”S supportive brother Bobby. He has his lazy laconic straight shooting style drawn to perfection. His quick flair of temper that turns to ice if you criticize his brother and his decisions, is indeed chillingly portrayed. 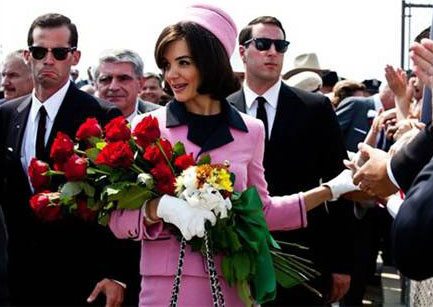 We love you Jackie, red roses since ancient times have meant love

‘I am the man who accompanied Jacqueline Kennedy to Paris, and I have enjoyed it’* Actress Katie Holmes as 60’s style leader Jackie Kennedy was wooden in some parts of the first episode, although there were flashes of the promise of growth to come in following episodes, at least if I am to take note of my US correspondent. 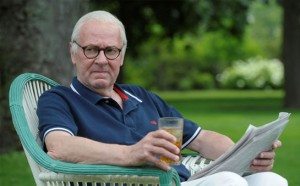 Certainly Tom Wilkinson was the perfect choice for the very tough Joe Kennedy. He steals all his scenes. He relishes the role, giving off the don’t ‘*&&^%$ with me attitude to perfection.

There is one incredible incident in the series, which perfectly illustrates Joe’s horror of imperfection and willingness to only accept the best from his offspring. As a young woman he has his daughter Rosemary lobotomized because she is uncontrollable. The cut is he doesn’t tell his wife Rose about until after the dreadful deed is done. When he is struck down later by a stroke and left in a wheelchair for half the series we are left regarding him with the conflicting emotions of pity or, a sense of satisfaction that he can no longer do anyone else any more harm. Its scary stuff.

Like many others I will watch The Kennedy’s right through, as his Presidency of the United States loomed large during my teenage years. And its good to remind myself of the many sacrifices others have made in helping shape the society and lifestyle we now enjoy. 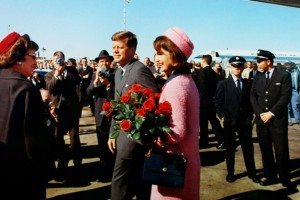 If anything at all this mini series reveals that the Kennedy family were dysfunctional as are so many others, despite all of their wealth and power. One thing we cannot dispute about JFK and Bobby is that they were, more than the rest of us, willing to stand up and be counted taking on the responsibility of helping to make the future.

‘If anyone is crazy enough to want to kill a president of the United States, he can do it. All he must be prepared to do is give his life for the president’s’.*

President John F Kennedy and later too his brother Bobby took a huge fall for freedom. For that, and all their other amazing achievements despite any controversy or display of human frailty portrayed in this mini series, they will always have my respect.

The Impressionists have today become popular because people from all walks of life, creeds and backgrounds relate to their optimistic view of a life well lived