September 2014 sees a return to the stage of Rodgers and Hammerstein’s most loved musical “The King and I”.

After the highly successful production of the duo’s “South Pacific”, Opera Australia felt they could look no further than this winning teams fifth musical together.

When I found out that Opera Australia and John Frost were producing this classic, I knew it would be on my must see list. Then I was kindly invited to the red carpet opening night on Thursday the 11th of September, so I jumped at the chance.

How would I feel revisiting an old favourite, and how would my eleven year old companion enjoy her first musical theatre experience? Childhood memories of being looked after by my lovely grandfather came flooding back.

He owned a copy of the soundtrack, back in the 1970’s this was in vinyl form, and just the album cover was enough to have me entranced.

It pictured a divine strawberry blonde actress, Deborah Kerr, dressed in what I thought was THE most beautiful gown I had ever laid eyes on.

Mauve satin with a full hoop petticoat (crinoline), the ultimate princess dress, and with an exotic Yul Bryner as the King of Siam by her side in Thai silk genie pants, it was the ultimate fairy tale to a four year old.

Straight to the turntable, there was only one song I played, “Shall we Dance”, and I played it until the record wore out. In full flight, bouncing around the lounge room with my imaginary King, the seeds were sown, I fell in love with the musical!

Fast forward to 2014. I’m a little older, but still as entranced with this tale. Right from the opening scene, I’m hooked!

The year is 1861, and an english widow Anna Leonowens, along with her young son travel to the Kingdom of Siam, (now, what we know to be Thailand) after she is enlisted to teach the many wives and children of the King.

We are introduced to Anna and her son Louis as they arrive at the port of Bangkok by way of passage on Captain Orton’s ship, and so begins the tale of “Anna and the King”.

It has been 23 years since this production first opened in Australia, and why not bring together the winning team of Christopher Renshaw, Brian Thomson, Roger Kirk, Nigel Levings, Susan Kikuchi and Peter Casey again.

After all, four Tony Awards can’t be wrong! The set is a sumptuous feast of all things fabulous. Brian Thomson AM has managed to harness the colour and exotic mysticism of the far east.

Using no less than 61,000 Swarovski crystals on this set, it is safe to say this man knows his bling and isn’t afraid to use it! Enthralled by the colours used, I felt they harnessed all the warmth of a Siam summer, the polar opposite of England where Anna and her son had started their journey.

Costume designer Roger Kirk must have been in heaven when designing these outstanding ensembles.

From Anna’s crinolines to the glitz of King Mongkut’s court, I am not surprised that he won four awards for best costume “The King and I”, including one of those Tony’s. The sequins sparkled and the satin shone for all to enjoy, including the ball gown from my favourite scene.

I must say, Teddy Tahu Rhodes gets to wear some of the best gear in this production, there was one jacket he wears that I secretly covet.

Must have a word to the fabulous ladies at the Opera Australia costume department about that!!

I loved Susan Kikuchi’s choreography, especially the scene where “The Small House Of Uncle Thomas”.

This interpreted by Tuptim, the beautiful Burmese girl, played by Jenny Liu, given to the King as a “gift”.

I felt the traditional Thai feel of the dancing was a special touch.

The songs are still so wonderful.

“I Whistle A Happy Tune”, “Getting To Know You”, “ My Lord And Master” and my favourite “Shall We Dance” showed how talented the whole cast are.

I was especially moved by Shu-Cheen Yu as Lady Thiang singing “Something Wonderful”. It must be an incredible piece to sing.

The orchestra were fabulous and the music sublime.

We are so fortunate to have such amazing talent in Australia, and we must keep fostering it by supporting our arts. 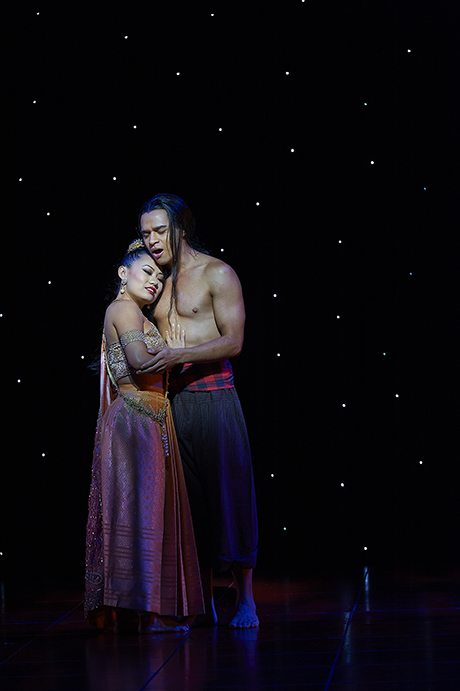 I was thoroughly mesmerised by this production, as was my companion.

I caught a glimpse of her face during the production, eyes like saucers, soaking up every nuance of this divine production.

As often with children (or a lovely young lady in this case), you can never tell what they are thinking. I would just have to wait till the end to ask her opinion.

As a standing ovation greeted this fine cast, and gorgeous glittery confetti fell from the heavens, I asked her tentatively “did you like it?”.

She didn’t miss a beat. “I really, really liked it” she said in an animated tone.

Curiously I asked, “what did you like about it?”. “Everything JoJo, everything!” she replied joyously.

And I had to agree, I fell in love all over again.

My memories revived, and if I am honest, a small tear shed at the thought of my gruff grandfather with the heart of gold, and his record collection.

All I can hope is that maybe in her later years, she may take a special someone and think back to memories of her first night at the theatre with me.

That would indeed be “something wonderful”.

The King and I is on at the Sydney Opera House in the Joan Sutherland Theatre from 7th September to 30th of October 2014.

The King and I