Lisa McCune as Anna and Teddy Tahu Rhodes as the King - The King and I, courtesy Opera Australia

Shall we Dance, on a bright cloud of music, shall we fly! These are words a whole generation were captivated by as the Siamese King and the lovely English rose Anna danced around the great room of his glittering palace together. She was wearing a huge Victorian crinoline dress and he his red and gold silk Chong kraben, or wrap around pants topped with an open short jacket with a mandarin collar revealing his handsome chest.

The tension created as he moved towards her with his hand extended to take her in his arms was one of the most powerful in film history.

Opera Australia together with John Ford presents Roger and Hammerstein’s Triple Crown Award winning musical The King and I. It has returned to the stage seeking to win a new generation to its favour. Detail, Anna and the Children...

The story about the King of Siam who is struggling to uphold his countries traditions while at the same time leading them forward by breaking new cultural and scientific ground for his country, will commence at the Princess Theatre in Melbourne on 10th June.

This production by Ford was first presented in 1991. In 1996 it won four Tony Awards on Broadway, including the triple crown of awards: The Tony, the Drama Desk and the Outer Critics Circle for Best Musical Revival. Tony and Drama Desk awards included Best Scenic Design and Best Costume Design, and a Laurence Olivier Award nomination.

Its Director at that time Christopher Renshaw is in charge of this revival, with a set by Brian Thomson, costumes by Roger Kirk, lighting by Nigel Levings, sound design by Michael Waters and musical direction by Peter Casey. Susan Kikuchi will recreate the original Jerome Robbins choreography, as well as that of her mother Yuriko, who appeared in the original 1951 Broadway production and 1956 film.

The production capitalizes on the success Opera Australian enjoyed with South Pacific starring Lisa McCune and Teddy Tahu Rhodes. McCune will play the role of Anna Leonowens, the English widowed governess who arrives in Siam with her only son having been retained by King Mongkut in the early 1860’s to educate his children, including his son and successor, Prince Chulalongkorn. During his reign he was unable to achieve fundamental internal reforms, but he took pains to ensure the liberal education of his sons, who in the next generation would begin the modernization of Siam.

The King and I is based on Margaret Landon’s 1944 hit novel Anna and the King of Siam, which in turn was based on an original work written by Anna Leonowens (1831-1915), who really worked for the royal household.

A huge hit on Broadway in 1951, where it starred Gertrude Lawrence and Yul Brynner, the stage show ran for three years before touring. Lisa McCune as Anna and Teddy Tahu Rhodes as the King

However it was in 1956 that it became a famous hit film starring one of the world’s most famous actresses at the time Deborah Kerr as Anna with the mesmerizing Russian born actor of Eurasian ancestry Yul Brynner, who deservedly won an Academy Award as the King.

Yul Brynner (1920 – 1985) became famous in this role, playing it with vigour, great sensitivity, gravitas and pathos.

The chemistry between Yul Brynner and Deborah Kerr (1921-2007) as Anna was nothing short of electrifying.

“I know audiences will embrace this Rodgers and Hammerstein masterpiece as much as they did when John Frost and his creative team created this magnificent, opulent production in 1991,” said Lyndon Terracini, Opera Australia’s Artistic Director. Considered the jewel in the crown of all Rogers and Hammerstein’s musicals, The King and I contains some of the happiest songs of the last fifty years including Getting to Know You, I Whistle a Happy Tune, Something Wonderful and Hello, Young Lovers.

Lisa McCune will captivate the audience as she appears opposite Jason Scott Lee as the King for the Melbourne season, following his huge success in the role at London.

There is no doubt everyone will be whistling a Happy Tune along with Lisa McCune who is one of Australia’s most successful screen and theatre actors. A successful stint as Nellie Forbush in South Pacific with Teddy Tahu Rhodes was much acclaimed, as it was her role in the King and I when it premiered at QPAC, Brisbane during April 2014.

McCune’s considerable collection of awards, includes ten Logie Awards, four of them are Gold given for the Most Popular Personality on Australian Television.

The exotic Jason Scott Lee of Chinese-Hawaiian descent, first performed this role at the London Palladium in 2000 to rave reviews capturing “… the compassion and humour of the King, along with his menacing presence”. From martial art films to Mowgli in an adaption of Rudyard Kipling’s stories, or as Aladdin in the mini-series Arabian Nights, John Frost noted “Jason… brought a real authority to the role and he sang it beautifully”. 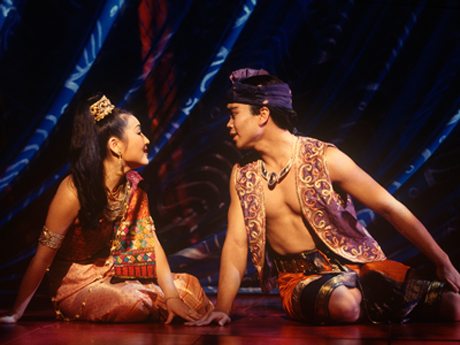 In the roles of British Diplomat Sir Edward Ramsey and Captain Orton is John Adam (The School For Wives, Frost/Nixon).

Marty Rhone (The King and I – West End, Godspell) who performed the role of the young lover Lun Tha 35 years ago with the record breaking production at the London Palladium, will in this production become the King’s Prime Minister The Kralahome.

Chinese-born Australian opera singer Shu-Cheen Yu (The King and I – 1991 Australian tour) plays the role of Lady Thiang while the Burmese young lovers, Lun Tha and Tuptim will be Adrian Li Donni and Jenny Liu. There’s is a story within a story…

Following its Melbourne Sydney The King and I will travel to Sydney in September, where Teddy Tahu Rhodes will be the King.

The King and I