Superb tapestry of the ‘millefleur’ type

The qualities or hallmarks of what would become the fully developed European medieval art of tapestry were excellence in design, crispness of execution, wonderful depth of tone, superb richness and exquisite gradations of colour.

The colours were natural dyes set by mordants such as Alum, a necessary process in fixing the dye to the wool. Such was the commercial strength of the textile industry owning deposits of Alum at that time was a sure way to wealth and in today’s terms could be compared to owning your own oil wells.

We sleep, but the loom of life never stops, and the pattern which was weaving when the sun went down is weaving when it comes up in the morning* Tapestry weavers created the design as they progressed out of their imagination or, from the documentary evidence we have, from about the fourteenth century onward copied from a cartone (It. broad sheet of paper) or cartoon (drawing or painting).

Some of these very earliest cartoons are still in existence and were hardly more than sketches. It was quite common for weavers to exercise their own flair by adding a small animal or a particular expression to a face ensuring that each work had its own peculiar characteristics and features. The symbolism attached to numbers and animals was also of major significance assisting in conveying a message, moral or otherwise, about the glory and welcome abundance of creation.

In the late medieval period of the fifteenth century the now famous millefleurs style tapestries appeared, which were characterized by their backgrounds being made of hundreds of tiny flowers.

The word millefleurs is French for “a thousand flowers” and as a background for a tapestry flowers were considered the height of fashion and sophistication.

Although the precise origin of the millefleurs motif is open to speculation, one possible suggestion is the technique was an attempt to preserve year round images of flowers whose nature was very fleeting. The most famous of any tapestries in the Millefleurs style are the six in the series known as La Dame á la Licorne or The Lady and the Unicorn.

This group of superb tapestries features an enchanting combination of deep red ground strewn with an abundance of flowers.

Woven from a combination of woollen, silk and gold thread these fabulous wall hangings have exercised an almost universal fascination on all those who have encountered them for hundreds of years.

In the nineteenth century Prosper Merimé the French Inspector of Historic Monuments drew the attention of authorities to the beauty and importance of the Lady and the Unicorn tapestries after finding them hanging on damp walls in the rat ridden decaying Château Boussac in 1835.

They were still there in 1844 when the renowned author of her day George Sand mentioned them in her novel Jeanne.

She endeavoured to use her celebrity status to have them removed to safety, but to no avail.

They were still there in 1853 when Baron Aucapitaine drew the attention of Edmond du Sommerard, the Curator of the Cluny Museum at Paris to them and he subsequently negotiated long and hard to secure them. Lady and the Unicorn – Sight

They were officially inaugurated in 1883 in the Cluny Museum, which is now called le Musée national du Moyen Age where the tapestries form the focal point of an outstanding collection of medieval art. Lady and the Unicorn – Touch

They sparkle with a profusion of amazingly intricate blooms providing the perfect foil for scenes depicting late medieval hunts and courtly love.

The tapestries are meant to intrigue and they do.

Every piece would have taken years to weave and their superb contrasting colours create a unique impression of harmony.

Five of the tapestries represent the important human senses; sight, smell, hearing, taste and touch and they quite literally take your breathe away for the eternal freshness of their colours.

Five is a powerful number in symbolism.

Early cultures believed the five senses were a facet of the creation of man and sacred, to the extent to which you consider a human being to be sacred, or at least potentially so.

Every detail delights the eye; the textiles represented include brocades, velvets and silks and they are shown off with jewels all of which have been rendered in wool with surprising exactitude. Lady and the Unicorn – Smell

Then there is the detailing of the millefleurs or thousands of flowers, which is more than impressive and were all found in France at that time.

They are combined with familiar animals such as foxes, dogs and ducks all mingling with exotic creatures such as panthers, cheetahs and lions.

The animals all have a basis in symbolism such as the rabbit, which represents fertility, the dog, loyalty, while the panther, who had a sweet breath, represents the Word of Christ.

Then there is the goat who is all knowing while the wolf, well he’s the devil incarnate.

Our gaze lingers longest, and perhaps with a curious pleasure, on that mythological beast the unicorn who is really worth an essay of his own.

He is both savage and loyal, and like Christ, pure and invincible while his flanking friend the lion: the King of beasts is both strong and courageous.

In some instances they appear to have been just plucked off a coat of arms to flank the figures and give them authority and they are skilfully rendered and the beauty of their draughtsmanship is striking.

The centrally focused Lady is depicted in an ordinary every day attitude, although she is dressed in different costumes in each one historically. She is the one who creates the aura of mystery, one that has endured. 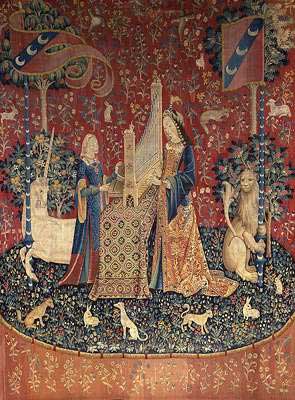 Who was she? Did she represent some famous person or is she…as some scholars claim, an allegory of the Blessed Virgin?

Does the crescent motif repeated constantly suggest a fascination with the East or is it an allusion to her being aligned with the Greek goddess of the hunt Artemis or Roman God Diana?

History has since lost or destroyed much documentation, and most theories and answers to many questions still remain obscure.

What we do know is that the Coat of Arms belong to a family from the region of Lyon. Jean leViste had a distinguished record of service to the King as President of the Court of Aids.

The tapestries, commissioned by him, proclaim the high social position that he held and reflect his personal glory. Then there is the enigma of the sixth tapestry, which appears to match but really stands alone. Its tent is studded with golden tear drops and its flaps frame the brocade be-gowned and be-jewelled young lady who draws all eyes to a central scene where she is replacing jewels in a casket to send them back.

This lends credence to the moral significance of the inscription a mon seul désir…’freedom from the passions provoked by ill controlled senses’.

Two important details still elude researchers; the personality of the artist who designed the tapestries for Jean le Viste and the place where they were woven.