There is one of many delightful moments towards the end of the movie The Lady in the Van where perennial English actor Maggie Smith is conveyed up into the back of a van. Her character Miss Shepherd is in a wheelchair and on her way to have a bath and her health assessed by social welfare.

There is this wonderful posture Maggie Smith assumes as she ascends, one that speaks eloquently of Miss Shepherd who truly believed she was ‘a person of significance’, born to make her mark on the world.

English writer Alan Bennett’s astute always-wonderful observations of the thwarted lives of personalities from all walks of life, included the wonderfully eccentric Lady in the Van. It emerged as another of his splendid masterful works in a slim volume in 1999.

A story based on truth, I read this tale of decay about loss, about regrets, about old age and about listening to people and what they say on a plane to London and was very affected by its many truths. The Lady in the Van is now a very affecting film, featuring the marvellous Maggie Smith who has left the Dowager Duchess behind to become a delightfully dotty vagrant Mary Shepherd, alongside an understated but brilliant performance by Alex Jennings as Alan Bennett.

The story unfolds as an investigation into the Lady in the Van’s intriguing past and is a reflection on Bennett’s motivations as a recorder of great characters in history, all of whom are… well, so English.

It would be fair to say Alan Bennett has made a marvellous mark on the world over the years. His short and long ‘untold’ stories, his amusing diaries, his wonderful plays and his screenplays for movies have ensured that his is a very special voice.

Maggie Smith and Alan Bennett were born in the same year, 1934, one decade exactly before me. Sometimes it seems to me that I have adored and admired them both all of my adult life, he as a writer and she as an actor. Maggie Smith as Mary Shepherd, rivalling Monet as she paints her ‘van’

They both knew the deprivations surrounding World War II and he recorded the simple aspirations of the time as the people of Britain helped to put her back together.

It was my very great privilege to see and enjoy Maggie Smith and Alan Bennett both live on stage in the West End of London in various productions from the mid 70-s to the late 90’s and to also read his numerous publications as they came to hand.

His marvellous Talking Heads monologues were about some very deluded souls and always brilliant, especially when delivered by Bennett himself or when Maggie Smith proffered her rendition of his Bed Among the Lentils.

In this she played a vicar’s wife who finds a vision of God at the local off-licence, an extraordinary and very humane experience.

Miss Shepherd; The Lady in the Van turned up in Camden Town on the block where Alan Bennett lived one day during the mid 70’s, taking it in turns to park outside his various neighbour’s properties.

She would change all their lives. These were people on the ‘up and up’ and so it would not look well for them if they do not treat this funny old cantankerous cranky lady kindly.

They all do so in various degrees, as they hold their collective breath and noses, as she litters their street with her plastic bags full of hope and some very smelly clothes. Maggie Smith as Mary Shepherd and Alex Jennings as Alan Bennett, in the movie Lady in the Van

Of all her neighbours however, the one she takes a shine to is the writer Alan Bennett, a gentle kindly soul on the outside whom, as we discover, is full of doubts and often dismayed at his own timidity on the inside, as he tries to take charge of what becomes a sad and often intolerable situation. Alex Jennings as Alan Bennett is a wizard, playing two roles, Bennett the self who does the writing and the other Bennett, the one living life dealing daily with Miss Shepherd, conversing often with himself about the best way forward.

When she first arrived he spent many months worrying about the old girl especially when she is harassed by noisy youths and terrorised by an ex cop, causing him to constantly intervene.

Having her bring her van into his driveway until she got her life ‘sorted’, where she remained for fifteen years, was as much for his own self-preservation as it was for hers.

From that time on the writer oversees all the action from his desk in the bay window. The conversations between himself are wholly enlightening, a very clever device to give us all his perspectives on what it was like living with her on a daily basis.

When we meet her Miss Shepherd has been fleeing from the police, fearing that her part in an accident where a young cyclist died was her fault, despite them telling her it wasn’t.

She reveals to Alan Bennett that she is travelling incognito, was once a nun ‘up the road’ chastised and hounded for playing the piano, which fed her soul.

She left that ‘august’ institution to make her way on the streets.

It turns out she was in fact a talented pianist Maggie Fairchild, who played as a soloist ‘at the Proms’ with the British Symphony Orchestra.

She was obviously considered a talent in her day, all of which became lost when she took up her role as a homeless person.

A glimmer of that brilliance returns, when she discovers a piano in the centre where she had been taken for a long overdue bath, and as she sits at the keys recalls her superb Proms performance in the spotlight. Maggie Smith, a formidable Miss Shepherd, the Lady in the Van

For Maggie Smith at this stage of her life and career the ‘Lady in the Van’ is a gift, providing her with an extraordinary opportunity to illuminate our screens once more with what is an all-encompassing performance, certainly worthy of many awards and accolades.

One of the aspects I loved about the cleverness of this very special film directed by Nicholas Hytner, is that the principal cast of Bennett’s wonderful play and magical movie The History Boys, which Hytner also directed, all pop up in cameo roles in the Lady in the Van.

Virtually a spot me if you can, the exception is Frances de la Tour, who has a more prominent role in the film as Mrs Vaughan Williams, wife of the composer and dear Richard Griffiths, who was to be in it too, but passed away in 2013. 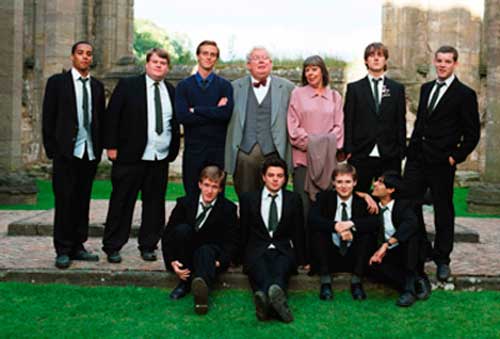 This casting reflects on an important aspect of Alan Bennett’s character, one integral to his well being, that of love and loyalty to those who have emboldened his life’s journey.

We can only thank him for enriching ours.

The Lady in the Van is a wonderful portrait of inner loneliness and a sublime statement of ageing.

Five out of Five Stars.

The Lady in the Van
Book and Screenplay by Alan Bennett

Normandy, a province of France has intriguing contrasts in both textures and moods and a walk through some of its villages can be a lesson on English history.