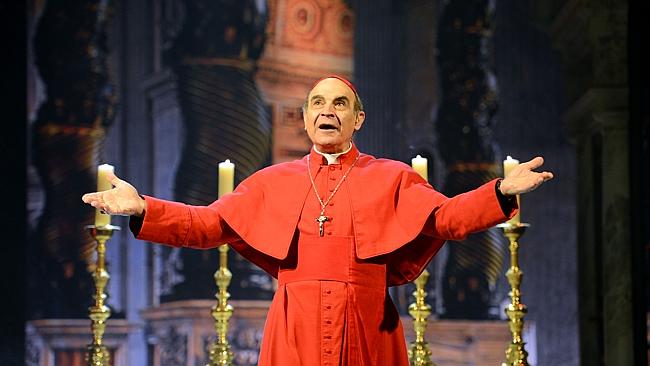 David Suchet as Cardinal Benelli in “The Last Confession.” Written by Roger Crane and directed by Jonathan Church,

“A cardinal is not measured by the clothes he wears but by who he is,” Pope Paul remarks to the newly promoted Cardinal Benelli, the role David Suchet plays in ‘The Last Confession’ now being performed at Melbourne’s Comedy Theatre until September 21st, 2014.

The play’s timeline is 1978, the locale: the Vatican. Pope Paul’s death sees Cardinal Benelli reveal exactly who he is; a man of influence and strong conviction who is disgusted by those in the College of Cardinals who sell the Vatican’s assets below market value, more than possibly pocketing a few dollars for themselves in the process. David Suchet as Cardinal Benelli and John O’May as Cardinal Pericle Felici in “The Last Confession.” Written by Roger Crane and directed by Jonathan Church,

David Suchet also reveals who he is, a quite wonderful actor whose superbly modulated voice and elegant sparseness of movement holds the audience in the palm of his hand.

By turn he voices sarcasm hidden in a velvet glove, despair at his loss of faith and towering rage at the iniquitous behaviour of his fellow Cardinals.

Supported by a large cast of twenty six international actors, all great ensemble players, Mr. Suchet, a smallish man, does, without seeming to try, win the spotlight whenever he is on stage.

The play’s plot centres on the conspiracy theory surrounding the Vatican’s shortest papacy: Pope John Paul I. Dying after only 33 days in office, Pope John Paul’s death has sparked huge interest – did he die of natural causes or was he murdered?

Cardinal Benelli, instrumental in John Paul’s election, at first works with the new Pope. He falls out with Pope John Paul 1 when he refuses to get rid of the Cardinals that Benelli claims will destroy the Catholic Church.

Deserted by Benelli, Pope John Paul, who detests the pomp and ceremony surrounding the papacy, often disappears on his own to walk among his congregation; the people of Rome.

This practice, unheard of, he is warned by his aides that this is conduct that’s not only dangerous but not befitting for a Pope. John Paul, played with appealing humour and down to earth wisdom by Richard O’Callaghan, tells his critics that he is a priest first and a Pope second. 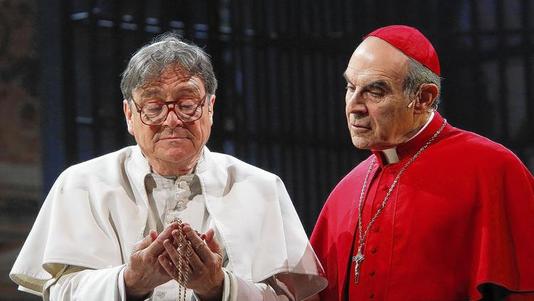 David Suchet as Cardinal Benelli and Richard O’Callaghan in “The Last Confession.” Written by Roger Crane and directed by Jonathan Church,

Deciding that Cardinal Benelli may well be right, John Paul begins a campaign to dismiss the Vatican wheeler dealers, who have forsaken their priestly values to scheme for personal gain and power.

Interviewing them one by one, he cloaks his real intention by expressing concern that they have been away from home for too long and then drops the bombshell; that’s where they are going – home and a.s.a.p. David Suchet as Cardinal Benelli in “The Last Confession.” Written by Roger Crane and directed by Jonathan Church,

Deftly played by both O’Callaghan and Milligan it’s a comeuppance for the Bishop and a short lived victory for the Pope.

Pope John Paul contacts Benelli and asks him to return as his Head of State.

Found by a nun, played by Sheila Ferris, the only female in the cast, John Paul has passed away while sitting in bed reading State papers.

The manner of his death, patently suspicious, an inquiry is begun as to the likelihood that the Pope was murdered. Cardinal Benelli, alone, calls for an autopsy.

He receives no support; the general consensus being that nothing must be done that will harm the Catholic Church.

Here on in, there is a no holds barred contest to elect the next Pope – the Cardinals form groups to ensure the candidate that guarantees the continuation of their power will gain the papacy.

Hard to believe these guys called themselves ‘Princes of Rome’- ‘power crazy priests’ is more appropriate.

‘The Last Confession’ is billed as a whodunit mystery.

To me though, it was a compelling expose of a huge corporation that had allowed its core standards and ideals to be replaced by the manipulations of individuals within the administration who sought to subvert the Church’s rulings for the relentless pursuit of power. Whodunit or not ‘The Last Confession’ is theatre at its best.

David Suchet, a thrilling charismatic Cardinal Benelli, supported by actors of talent and distinction in a play that whether you are catholic, protestant or just an interested bystander is a pleasurable thought provoking experience.