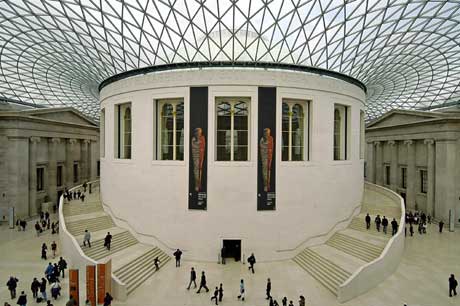 The objective of any museum is to tell the story of cultural development around the world, from the dawn of human history over two million years ago until the present day. In every major capital city of the western world there are various types of museums, and each has a different focus, dependent on the breadth and depth of their collection. 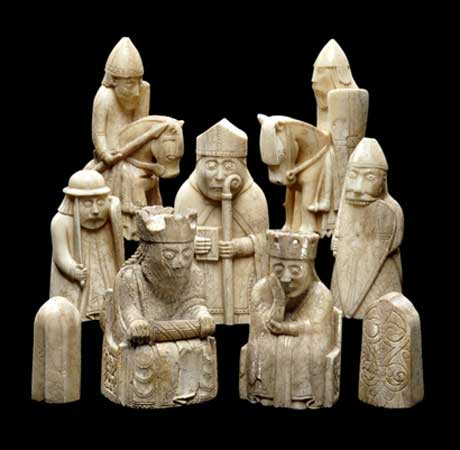 The British Museum, which was founded in 1753, is today housed in one of the most splendid blending of classical and contemporary architectural complexes in Britain, if not the world. It was the first national public museum opened in the world and has always offered free admission to the public.

From some 5000 people annually each year during the eighteenth century, it now hosts some six million.

One of the multitudes of splendid objects it has on display is the so-called ‘Lewis Chessmen’, whose name doesn’t reflect that there is a Queen involved. Whatever, they are surely one of the most captivating collections of chess pieces yet devised. 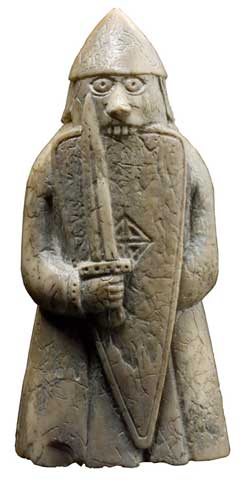 They are frequently sent on ‘goodwill between nation tours’ and having visited The Met in New York in 2012 some of the charming chessmen are now in September 2016, on display at the National Gallery of Australia, down under.

The most appealing and entirely endearing thing about them is their form and expression, which is truly delightful.

They are a remarkable group of playful people, which were found buried in sand dunes near Ulg on the Isle of Lewis c1831, part of the western isles, off the coast of Scotland. At that time the isles were part of the kingdom of Norway for 400 years. Sovereignty over the isles was transferred to Scotland in 1266 and today they are part of the British Isles.

The little chess pieces testify to the strong political and cultural connections that existed between Britain and Scandinavia during the Middle Ages.

They were part of a culture of wealth, which was largely in the hands of the crown, the church and aristocracy.  All of these viewed art as a means to acquiring status, prestige, patronage, comfort, or pleasure.

This was the era when chess became an important game played all over Europe and England, having originated in ancient India. The game of Kings as it has been called, arrived in Christian Europe via the Islamic world during final decade of the first millennium. 82 of the original 93 pieces are in the British Museum and the final 11 at Edinburgh in the National Museum of Scotland. They have been carved by a master craftsman from walrus ivory and whales teeth in the form of kings, queens, bishops, knights on horseback, warders and pawns in the shape of obelisks. They found contemporary fame when Harry Potter played with them in ‘The Philosopher’s Stone’. They are part of a game that was conceived as one of intellect and skill, which was meant to sharpen strategic thinking. The Queen surveys the carnage while the foot soldier, or rook is conversely, a figure of great heroic ferocity drawn from Norse legend and known as a berserker. 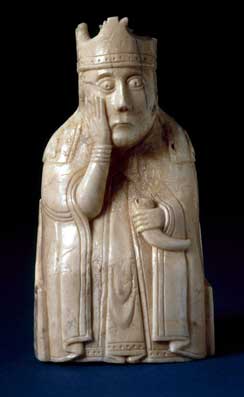 These fictional warriors are described in many Norse sagas as biting their shields in a state of self-induced frenzy.

No one knows why the chess pieces were buried, but they are believed to have been made during the 12th century and most likely have been the property of a merchant traveling the trade route from Scandinavia to Ireland. Mention of them first turned up in an article in “The Scotsman” in 1831.

They are between 3 and 4 inches high, and in a style we now know as Romanesque. Part of the Norse sphere of influence, the Western Isles were home to a seaborne princely culture and in the 13th century became engaged in a complicated power struggle, which eventually saw the Gaelic Lords of the Isles displace their Norwegian overlords. 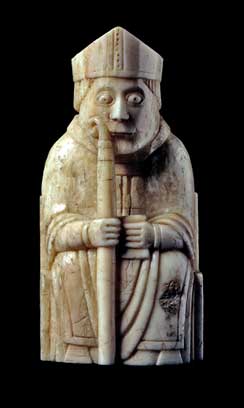 Following their discovery they found their way into the hands of a dealer, who offered the hoard for sale to the Scottish Antiquaries Society in Edinburgh. However they could not raise the funds to purchase them. Then the dealer a Mr. T.A. Forrest, approached the British Museum who acquired them between November 1831 and January 1832.

They found contemporary fame when Harry Potter played with them in ‘The Philosopher’s Stone’. They are part of a game that was conceived as one of intellect and skill meant to sharpen strategic thinking.

The Queen surveys the carnage the chessmen create. Her pose is said to derive of from depictions of a grieving Virgin Mary. She sits wearing a veil beneath her crown, to cover her hair, and is cradling her chin with her right hand and holding a drinking horn in her left hand.

The King has a scabbard that he is holding across his knees, right hand on the grip, left grasping the blade. He is wearing a crown that has four trefoils, and his hair is sensational. It is long and braided falling down his back. He wears a long mantle and tunic, a vestment with sleeves and slit sides.

The Bishop is giving a blessing with his right hand. He holds the crosier, the mark of the shepherd in his left hand and is wearing a Mitre on his head, which is a head covering reflecting organised Christian religions. The word mitre derives from the Greek mitra, signifying a diadem or headband that from antiquity symbolized royalty and/or dignity.

Exactly when the Church adopted the mitre as part of the vesture of bishops is difficult to know the first visual representations appearing during the eleventh century with the first written mention by Pope Leo IX in 1049, when he granted Bishop Eberhard of Trier “the Roman mitre” as a sign of his authority.

The Knight is just fabulous. He comes complete with a kite shaped shield and lance ready for battle. He sits on a horse that looks like a miniature Shetland pony, the protective coat he is wearing divided at the front and back for ease of movement.

The pawns lack human features, in the shape of obelisks like abstract pieces used in the Islamic version of the game.A wonderful resource, the British Museum allows everyone to explore the interconnected nature and network of world cultures.

You can always find some of the chessmen at home in The British Museum if you are visiting London.

It was naturalist and collector Sir Hans Sloane (1660 – 1753) whose beautiful botanical drawings were recorded so brilliantly by the Chelsea Porcelain factory in the 18th century, who was at the heart of the founding of the British Museum.

He had amassed an amazing collection of objet d’art during his lifetime, some 71,000 in fact, that he wanted preserved intact. So he agreed to bequeath them to the nation via George II in exchange for 20,000 pounds for his heirs. The gift was accepted and the government enacted a bill in parliament and established the British Museum. 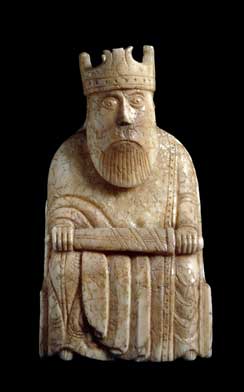 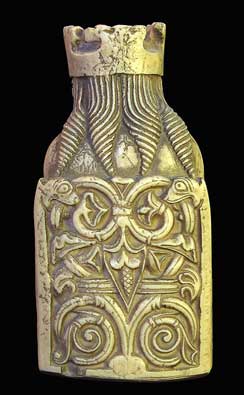 The founding collection consisted of books, manuscripts and natural specimens, with some antiquities. There were coins and medals, prints and drawings and ethnographic material.

King George II donated the ‘Old Royal Library’ of the sovereigns of England in 1757and with it the privilege of copyright receipt. Over the centuries since some of the greatest treasures in human history have been added to the horde including the Rosetta Stone (1802) the Townley Collection of Sculpture (1805), and the controversial Parthenon Sculptures (1816).

By 1823 they had outgrown the 17th century mansion Montagu House that they first set up in and the spectacular quadrangular building and the round Reading Room were constructed by 1857.

It was designed by Sir Robert Smirke (1780 – 1867) and was a quadrangle with four wings: the north, east, south and west wings. It has been added to since and the space that was supposed to be a garden was redeveloped at the turn of the century into a great glass and steel domed courtyard.

The canopy was designed and installed by computer. It was constructed out of 3,312 panes of glass, no two of which are the same. At two acres, the Great Court increased public space in the Museum by forty per cent, allowing visitors to move freely around the main floor for the first time in 150 years and creating new spaces; galleries, education and visitor facilities and forecourt 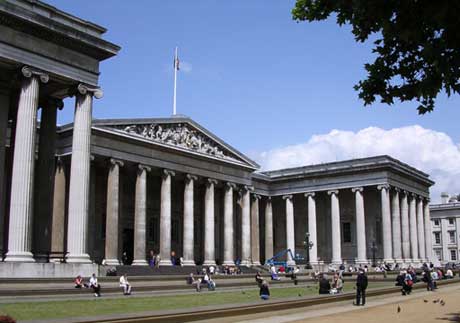 Ten Greek Visual Artists will be featured in an exhibition Art Capital 2018, at the Grand Palais, Paris February 13 – 18, as part of the Salon des Indépendants. They represent Greek art; presented under the auspices of French President Emmanuel Macron, French Minister of Culture. They are Eleni Varouxaki,…