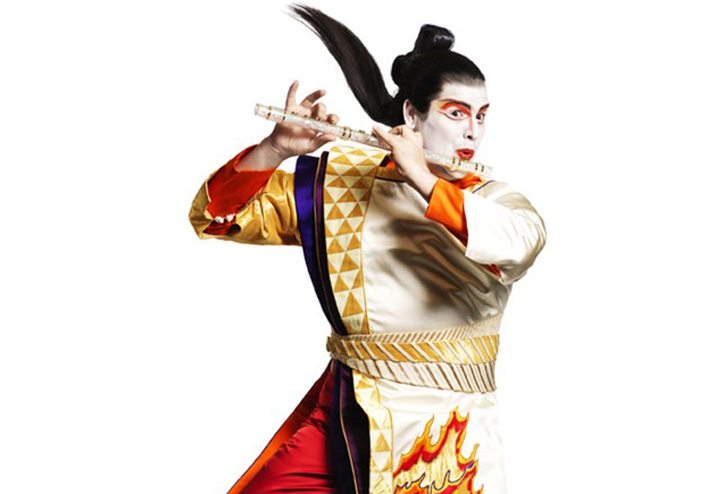 Opera Australia (OA) starts the 2014 Summer season with its enchanting production of Wolfgang Amadeus Mozart’s The Magic Flute on Saturday January 10th in Sydney at the Opera House.

First performed only two months before Mozart’s  death, The Magic Flute is the story of true lovers who must survive many magical ordeals before they can be together. Mozart was entirely enchanted by the sorcery of singing and song, which made him turn to the paramount form of vocal composition, the opera.

American Director of theatre, opera and film Julie Taymor, whose work has received many accolades and two Tony Awards out of four nominations, has prescribed the aesthetic for one of most popular works; the spellbinding costumes for a show that offers fabulous puppets and special effects, including ‘a nine-metre serpent, towering polar bears and hundreds of props painstakingly hand-crafted in a mesmerizing kaleidoscope of colour’. Ideally this is a show you will be able to take the whole family to see during the summer holidays, and the many matinee performances on offer will take centre stage. It’s suitable for ages 6 +.

“It’s a wonderful piece of theatre,” says director Matthew Barclay, “and a work of art in every dimension – costumes, puppetry, choreography, lighting and scenic design – together they create a magical storytelling world worthy of Mozart’s extraordinary musical imagination.”

Many of the opera’s ideas and motifs echo those of eighteenth century ‘enlightenment philosophy’ when composers were producing works that exuded ‘noble simplicity and quiet greatness’, qualities enlightened men and women were seeking to gather unto themselves. Milica Ilic will be Queen of the Night for the Opening Night for Opera Australia on January 10th in Sydney.

Serbian born soprano Milica Ilic moved with her family to New Zealand in 1996, where she began her musical training with Professor David Griffiths.

In 1999 Milica was a part of a national New Zealand television show Dreams Come True where she met, and had an intensive workshop weekend with, Dame Kiri Te Kanawa.

Milica and her family moved to Australia and she completed a Bachelor of Music degree at Queensland Conservatorium, singing the roles of Pappagena in Die Zauberflote by Mozart, Cupid in Semele by Handel and Nanetta in Falstaff by Verdi.

Milica has won numerous awards for her singing including the Margaret Nixon vocal competition twice and also the Dame Joan Sutherland singing competition at the youngest yet recorded age of 19.

Last January she moved to Milan in Italy and now bases herself there and comes to Australia for various work. This year she will sing Carmina Burana with the Adelaide Symphony Orchestra in May and the Queen of the night for the West Australian Opera in June-July.

Other engagements include singing Lucia in Lucia Di Lammermoor for the Donizetti Theatre in Bergamo, Italy and the Queen of the Night in Essen Germany. Many melodies in The Magic Flute are highly familiar, and include the famous Papageno and Papagena duet.

A notable feature of the music is the way in which Mozart was able to write for a range of skill-sets to combine voices of great virtuosity with those of what are essentially comic actors creating a satisfying result.

Sarastro, the wise priest of Isis and Osiris, has taken Pamina to the temple for the humane purpose of releasing her from the influence of her mother, the Queen of the Night.

The immense talents of American bass Morris Robinson as Sarasto, direct from The Met, New York, is showcased in this production.

Mr Robinson has performed this role several times at The Met, wowing audiences with a voice “so deep and assured it’s as if a vibration goes through the audience every time he opens his mouth” (The US Globe & Mail). High Priest Sarastro and his followers and Masonic symbolism

The Magic Flute is often noted for its Masonic elements, an aspect of the political climate of times when Freemasonry was considered a dangerous organization.

To put Mozart into his extraordinary historical context he was 4 years of age in 1760 when King George III ascended the throne of England and 14 years of age when Captain Cook landed at Australia in 1770.

This was in the same year another great composer Ludgwig van Beethoven was born.

There have been many other youngsters since Mozart who have played an instrument adroitly, but by the age of 8 Mozart was not only an accomplished piano, organ and violin player, but also had an amazing knowledge of musical composition that one would only expect from a man seasoned in his profession. His widely accliamed performances made on his travels around Europe with  his father and sister meant that he was able to unite the musical treasures of all nations.

If we think about it this could have been a disaster, but instead his compositions were a triumph.

At the time French philosophers Jean-Jacques Rousseau (1712-1778) and François-Marie Arouet, known by his nom de plume Voltaire (1694-1775), were both busy expounding enlightened theories, while in America Thomas Jefferson (1743-1826) was writing a document that would give Americans independence in 1776 when Mozart was only 20 years of age Andrew Jones as Papageno and Nicole Car as Pamina.

The Magic Flute is a happy ever after story set to glorious music, which is all at once, delicate, poetic and decorative. It is meant to charm, entertain, and move, but without tears and violent passions, the depths of your spirit and soul.

This virtuoso era produced music with splendour and mechanical ingenuity and many consider the operas and musical performances of this period have never been surpassed. It is not really enough to say that content and form balance each other in Mozart’s music, for this unity is style and while the style is constant, the variety of its manifestations is as great as the number of his works.

Musical gestures in Mozart’s age were filled with pathos; musical melody exploited by the human voice in powerful performances of sensuous beauty and soaring vitality.

It certainly reflected all that was, and is still good about life.

This production is reproduced by Opera Australia from the original production of The Magic Flute by the Metropolitan Opera, New York Performed in English with surtitles Running time: 2 hours approx with one 20-minute interval

Artist Rod McRae WUNDERKAMMER, The Cabinet of Wonders is starting on the 5th February at the National Trust Victoria headquarters in Tasma Terrace, Melbourne