Dev Patel as Srinivasa Ramanujan and Jeremy Irons as Godfrey Harold (G.H.) Hardy, in  The Man Who Knew Infinity

It would be fair to say that in the past few years’ stories about Mathematics have become very sexy for filmmakers.

The Imitation Game with the brilliant Benedict Cumberbatch as Alan Turing, pioneering computer scientist and Eddie Redmayne, pure genius as everyone’s favourite physicist Stephen Hawking in The Theory of Everything, were both stories powerfully told.

Now we have The Man Who Knew Infinity, with award winning actor Dev Patel as acclaimed Indian mathematician Srinivasa Ramanujan (1887-1920).

Directed and written by Matthew Brown from a biography by Robert Kanigel, this is a story I did not know, about people I had never heard of, evolving in a place that I had; Trinity College at Cambridge University in England. Cambridge is one of those very special places of learning many people aspire to attend as so many great men and women in history have gone before them.

The day Ramanujan finds himself in a hallway surrounded by sculptures of notable alumni from Trinity College you can understand his awe. He’s surrounded by men of history who raised standards so high in their day, they became roles models for great men of the future including – John Dee (1527-1608) Alchemist, Geographer and Mathematician and Francis Bacon (1561-1626), Lawyer, Philosopher, Poet and Lord Chancellor of England, to name a few.

When he finds himself staring at the feet of the great Isaac Newton (1642-1727) Mathematician and physicist, you can share his overwhelming feelings.

G.H. Hardy appears at first glance to be a curmudgeon of a character. Wonderfully realised by Jeremy Irons, with acquaintance he not only ages like a wonderful red wine but also turns out to be like one, full of complexity.

Hardy was a scholar and a pure mathematician, one who hoped his theories could never be applied.

He noted a ‘mathematician’s pattern’s, like those of the painter’s or the poet’s, must be beautiful, the ideas like the colours or the words, all fitting together in a harmonious way.’ Hardy also noted the mathematics he learned during his lifetime was an art form that reflected truth.

He was however bound by his formal training and as such made sure all his own, mathematical calculations, and any put forward in his name were ‘provable’.

During the months leading up to the beginning of World War I, Hardy receives a letter.

Despite knowing ‘knowledge comes from the humblest origins’ he is thrown into disarray for a time, as pages of startling mathematical notes accompany the letter from a young Indian man living in Madras, India.

The pages contain highly original mathematical calculations like he has never seen before.

Intriguingly, even though the envelope is covered in Indian stamps and has been sent from Madras in India, he honestly believes at first it is a joke.

He surmises its origins lay with his brilliant colleague Professor J.E. Littlewood (1885-1977) played with wonderful pathos by the truly delightful Toby Jones.

However when Hardy confronts his friend he discovers it is not from him and realises it is genuine. 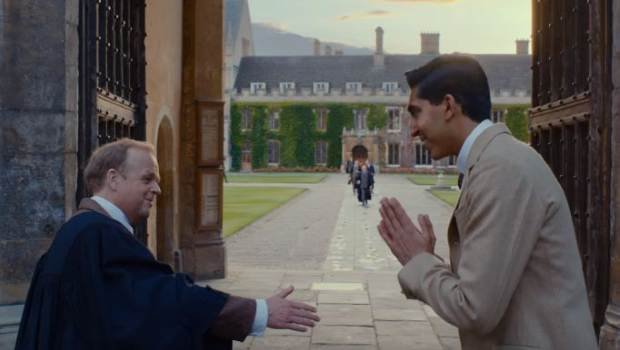 His five-year stint with Srinivasa Ramanujan starts in 1914 when the young man disenchanted with not being able to gain recognition at home, leaves his arranged for wife whom he has grown to love, and his overbearing mother, arriving weeks later in Cambridge, sponsored by the college on Hardy’s recommendation.

His own essential passion, dignity and overwhelming conviction and a belief he is right about his formulas, would be all that would keep him driving on, despite being encouraged by his superior in the Madras Port Trust Office where he is employed as a ‘clerk’, Sir Francis Spring (Stephen Fry).

He badly miscalculates how hard it will be to have his work published. Ramanujan when he arrived in Cambridge was naïve, at 27, in the ways of the world. He had not travelled outside Madras, his own city in India until he found himself on the other side of the world in a culture foreign to his own, one where he alone was the one having to embrace change on a massive scale. 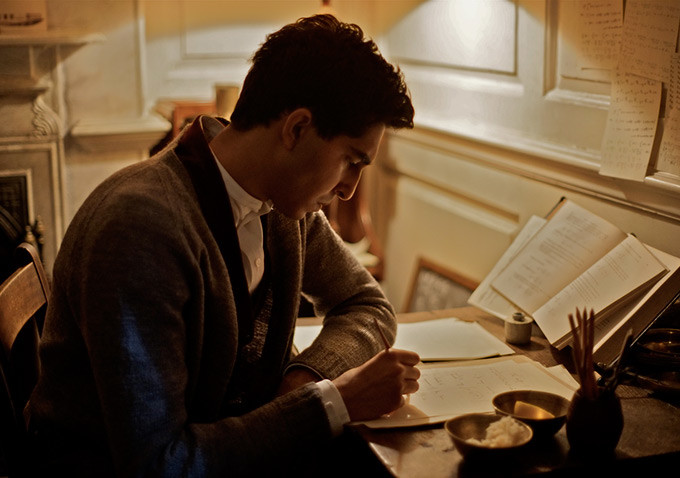 Dev Patel as Srinivasa Ramanujan in The Man Who Knew Infinity

Dev Patel conveys how out of depth the inexperienced naive Ramanujan was in understanding the academic world in England that he strived to be part of; a climate and culture in which naked opposition to new ideas and change abounded, threatening men self satisfied with tenure.

He and Irons work well together, two opposites who gain respect for each other, despite Hardy’s failings

Ramanujan also arrives during a difficult period, the countdown days leading up to the outbreak and duration of World War 1 following the Archduke of Austria’s assassination. Jeremy Irons as G.H. Hardy and Kevin McNally as Major McMahon in The Man Who Knew Infinity

Most of the academics who surround the gruff Hardy are tiresome pompous people with more than enough arrogance to go around. They would quite happily bring Hardy and his young charge down to size out of just jealousy, spite and envy before going home for tea.

This world our young self-taught poor Indian student arrives in, his mind already light years of theirs in terms of innovation but eons behind in worldly experience, is a cruel one. He soon suffers bullying, humiliation, prejudice, jealousy and near starvation. At first Ramanujan and Hardy are polite to each other but at odds, the older man unable to cope with his young charge not being able to ‘prove his theories’, which inspired by being in his new location, seem to roll out from his mind through his pen, continually.

Hardy, at 36 was the leading mathematician in England at the time. He insisted on Ramanujan putting aside any notions of becoming published until he can prove the many changes to accepted theories he is putting forward. He has to turn his young charge into a scholar so that he can gain the recognition he craves.

Ramanujan guided by Hardy sits in on lectures, enforcing ideas about formal training, most of which Ramanujan although self-taught, has left behind.

Showing up a Master is never good form: Dev Patel as Ramanujan and Anthony Calf as the disdainful Master

He immediately rubs one influential master up the wrong way with undisguised envy rising to the fore as he crushes his charge’s naivety in one fell swoop, just because he can, enjoying watching him suffer.

Kevin McNally, the late Richard Johnson and Anthony Calf play the trio of  racist, snobbish, jealous fellows who are all contemptuous of Ramanujan’s approach to their subject. Hardy is not interested so much in Ramanujan the man himself at first, but how he can assist him to achieve his objectives.

A vegetarian, little understood in a Britain where there is mostly mutton for tea, the potential scholar suffers terribly throughout the war without anyone knowing, because it was a time fresh produce was hard to find.

Over the five years he was there making his own meals in his room at night, his exceedingly poor diet would greatly affect both his health and well being, during a time when tuberculosis was raging. It’s a bittersweet tale. Hardy never thinks about what this young man may have left behind, let alone a wife.

The young man is too proud to tell him and so we have the quintessential ‘odd couple’ forming what would become known to history as a ‘legendary partnership’, one that would lead to Ramanujan gaining fellowship of the Royal Society and fellowship of Trinity College.

There is no doubt this clever mathematician from Madras, despite being obsessed with mathematics to the exclusion nearly of all else, was an exceptional human being.

His was a mind unfettered or constrained by ‘academic rules’, one that only answered to a higher power, his Hindu God Namagiri. Hardy spends a great deal of time trying to ‘fool God’ by carrying an umbrella to a cricket match to make sure it didn’t rain, declaring to Ramanujan that he is ‘anti-God’.

Showing wisdom beyond his years, Ramanujan observes about Hardy, that while he professes not to, he really does believe in God but just doesn’t think that he likes him.

After experiencing the movie at a preview, I would have to say Ramanujan’s story ranks up there with Turing and Hawking and I am sure they would both agree.

My only frustration in some ways with the movie, was that I had wished they had made the story into a television series, so they could tell the story well. It’s such a wonderful tale and personally I would have liked to have better understood the math,  Ramanujan’s abiding passion.

In failing to draw us sufficiently into that aspect of his world more, we have no knowledge of why he was great until the end.

The highlight at that point was learning after the fact that this amazing individual made a difference not only then, but also now because his influence is still ongoing. It seems that little did Hardy know at the time, but Srinivasa Ramanujan would with his help, revolutionise the field of mathematics before dying aged only 32. His overwhelmingly original theorems are still in use today assisting science with the formation of theories surrounding the black holes in our universe.

Ramanujan was indeed, a bright and shining star in the firmament.

The Man Who Knew Infinity