The Marais Project‘s 1st recital of the year will feature a new work by young composer and gambist, Alice Chance.  Music being presented includes Pièces de clavecin en concerts for harpsichord, violin and viola da gamba and two cantatas by Jean-Philippe Rameau (1683-1764) and a new piece for viola da gamba by Alice Chance entitled “Mathematics of Motion.  Alice Chance studied the viola da gamba at Sydney’s Conservatory of Music with Jenny Erikkson, who is the founder and viola da gamba player with the ensemble that will perform in the first of their recital series. The 250th anniversary of Jean Philippe Rameau’s death is giving musicians of the world an opportunity to visit the life and times of one of the greatest French composers of all time. Highly esteemed by his contemporaries including JS Bach and Marin Marais, Rameau’s music deserves to be more widely heard. 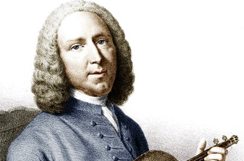 His Pièces de clavecin en concerts were composed in 1741 when he was living in the home of financier La Pouplinier,  who had gathered a stimulating circle of writers, artists and musicians around himself. Rameau served as his maitre de musique in his splendid salon from about 1735 until 1753. The rich musical resources available to him included virtuoso clarinettists and horn players brought in from Germany and Bohemia to provide music for singers players and dancers employed at La Poupliniere’s disposal. This provided Rameau with a private forum of inspiring people to operate from as they all refined their taste and increased their knowledge, pleasing and educating. It was during this period that Rameau gained a foothold at the Royal Court and became compositeur de la musique de la chambre du roy in 1745. He composed a comedie-ballet, La princesse de Navarre with the French author Francois Marie Arouet de Voltaire (1694 – 1778), and Platée, an opera in three acts written for the celebrations of the dauphin’s wedding. In 1748 Rameau and Voltaire also produced Les surprises de l’amour for the Théâtre des Petits-Cabinets of Mme de Pompadour. Rameau’s works were full of emotion with rich, late-Baroque harmonies that offered dramatic contrasts, brilliant orchestral sections and points of pastoral reflection. The Prince de Conti said of Rameau “My Lord, there is enough music in this opera to make ten of them; this man will eclipse us all.” Join Jenny Eriksson, Alice Chance and their colleagues for Concert 1 Rameau, 3.00 pm Sunday 25th May Venue: Recital Hall West, Sydney Conservatorium, Macquarie St, Sydney.

For the first time Pantone, THE “go to” designer colour chart, has introduced two shades as colour of the year, Rose Quartz and Serenity. And I’m loving them both! Just gazing out into the sunset of last nights dusk sky, it struck me that the tones I was dreamily in…