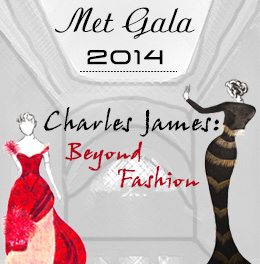 Monday 5th of May saw fashions finest descend on The Metropolitan Mueseum of Art in New York City.

The Costume Institute Gala or the Met Ball as it is fondly known, is THE Oscars of fashion.

It is one of the most exclusive events in New York City and at USD $25,000 per ticket, the price tag is certainly designed to keep the riff raff out.

This years figure was an astronomical at USD$12 million. During the morning we saw America’s first lady, Michelle Obama join the first lady of fashion, Anna Wintour, the English born editor-in-chief of American Vogue, to preside over the official opening of the redesigned and renovated galleries that form “Anna Wintour Costume Center”.

The curatorial department itself will continue to be called The Costume Institute.

Anna Wintour has raised USD$125 million over 16 years for The Met, an amazing feat.

Cutting the ribbon dressed in a stunning Naeem Khan dress with a green leaf appliqué, matching earrings and a fabulous sweeping side part hair style, the First Lady seemed in her element.

You can tell she truly loves fashion.

Michelle Obama paid tribute to “my friend Anna Wintour” and announced that the two will be partnering on a White House fashion workshop for students. She also stated “fashion isn’t an exclusive club”, to which I would usually agree, but for this one night I beg to differ.

The theme “White Tie And Decoration” would have stumped some, and excited others.

So how did the movers and shakers of the fashion world rate?

Some were absolutely sublime, others a little ho-hum, and then there were the ones, who I felt missed the brief totally. Let’s check out the night of nights.

Well Zac’s pack or the Posen Posse were hand’s down winners for me.

Every gown designed by Zac Posen put on that red carpet was a joyful sight.

He nailed yesteryear glamour, and he looked incredibly dapper himself, donning a fabulous cloak.

His girls radiated all kinds of wonderful.

Dita Von Teese in almond blush and pillar box red, which was just a continuation of her corpus delicti, a second skin if you will.

The red, a silhouette of her lips and the cream, a perfect match to her milky skin. This was my favourite Posen gown.

The structure was incredible, and that marine blue on the raven haired beauty was immaculate. With Sarah Silverman in jester red and Alicia Quarles in royal blue, Posen could do no wrong.

This was all class and respect, paying homage to the man that they were there to honour, Charles James. Jenner in vanilla cream accessorising with a radiant Chopard diamond choker, Iman in glacier grey satin, Dunn in a plunging vibrant yellow and finally Garrn in powder blue all rocked the mermaid vibe. Loved it! Also staying true to the era of Charles James was Haliee Steinfeld in Prabal Gurung.

This was my gown of the night.

Taking his cue from the “four leaf clover” dress and putting his own spin on it was genius.

I loved the pale pink lining winking out from under the structured black and white skirt, add a pair of fabulous Charlotte Olympia gold satin heels and you have a flawless look.

Ten out of Ten! Karolina Kurkova in Marchesa was breathtaking, in gunmetal blue with what looked to be hand painted flowers.

This was actually a two piece, a skirt with the top that I imagine, could be worn as a dress separately. An asymmetrical neckline added a touch of modernity. An absolute vision. The hair, the gloves and jewels shone, although I wasn’t quite sure about the Oscar de la Renta signature across the back of her dress.

I’ll let that slide because SJP can do no wrong in my books, love her. Dusty pink tulle dissected with mushroom pink, created gorgeous tiers of charm, although I was a little disappointed in the fit of the bust. I think this would have look divine in the flesh, photo’s did not do it justice. Big ticks to Emmy Rosum in a floral Carolina Herrera, Anna Kendrick in J. Mendel and Allison Williams whose Oscar de la Renta was a nod to the famous “diamond” dress of Charles James. Most of the men were stylish in their white tie theme.

Ever eccentric Johnny Depp added a quirky cane. Uber designer Tom Ford  was photographed with the handsome actor Benedict Cumberbatch (Carolyn, our editor’s favourite), who was the only man to dress in exact “white tie”.

They all looked dishy, on a night where all eyes are mostly on the ladies.

At Fashion Elixir my focus is always on the positives and I do intend to leave any criticism to the tabloids.

The only thing I will mention is that this was a BALL, a Gala event and I believe that the invitation calls for a full length skirt at least.

Call me traditional, but that’s the way I see it.

How often in todays society do we get to rock a frock, a real princess number made of gossamer tulles, sumptuous satin and voluminous skirts?

That was America’s first couturier Charles James’s vision. And, it really is “beyond fashion”.