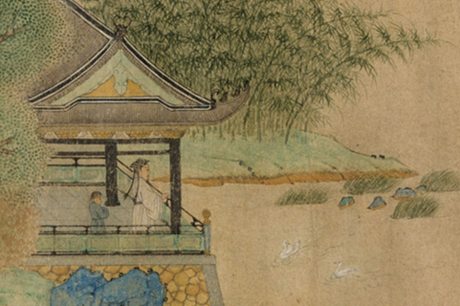 For centuries in China there has been a rich interaction between the pictorial imagery of gardens and the growth of garden arts. In a Chinese garden a strong belief in a sense of unity with nature as a benign wilderness, source of awe, magic and sustenance is required. What vibrates through and around the various elements of its composition was that it was purposefully designed to ‘bring out the rhythm of nature’, blending together many different elements to create a remarkably integrated concept. A Chinese garden was always the preferred location for holding literary gatherings, theatrical performances, and imaginary outings; gardens were often designed following the same compositional principles used in painting. Idealized landscapes drew inspiration from literary themes first envisioned by painters. Not only were painters often recruited to design gardens, but also as gardens came to be identified with the tastes and personalities of their residents artists were called upon to create idealized paintings of gardens to serve as symbolic portraits intended to reflect the character of the owner.

At The Metropolitan Museum of Art (The Met) in New York from August 18, 2012 – January 6, 2013, there will be an exhibition entitled Chinese Gardens: Pavilions, Studios, Retreats. Showcasing more than 70 works—paintings and contemporary photographs as well as ceramics, carved bamboo, lacquer ware, metalwork, and textiles. The show will be displayed in eight galleries encircling The Astor Court, a Chinese garden modeled on a seventeenth century scholars’ courtyard in the Garden of the Master of the Fishing Nets in Suzhou. No culture in the world, eastern or western, has produced such a long continuous tradition of garden design than that of China. Their civilisation started with the advent of agricultural activity and paid homage to the soil in what has been called ‘a religion of agrarian fertility’. The mother goddess was the earth, Shung Ti the god of vegetation and humankind not exalted as essentially different from all other created things. The harmonious co-operation between man and nature meant that man acted as the agent through which the abundant potential of nature could be fully realized. The first reference to a garden in Chinese literature suggests it consisted solely of useful trees planted with the walls around a homestead. This garden contained willows, hardwoods and mulberries and is mentioned in the Shih Ching, a book of songs collected around four centuries before the Christ event. This was when poets also described a garden full of pretty pavilions, winding waterways and wonderful vistas of mountains.

Organized thematically, the exhibition will illustrate how garden imagery has remained an abiding source of artistic inspiration and invention. 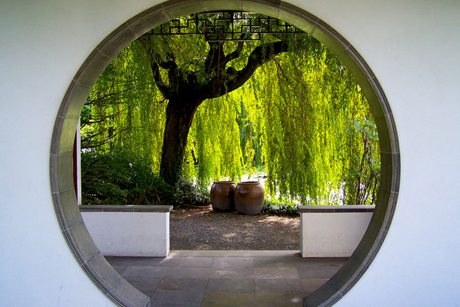 There will be six themes:  1: Palaces features an imaginary panorama on a screen like set of scrolls of a seventh-century palace so grand that the emperor Kangxi Emperor (r. 1662-1722) and his entourage when he visited Yangzhou during his celebrated 1689 Southern Inspection Tour had to ride on horseback between pavilions. 2: Pavilions and Paradises, which provided focal points from where to observe the garden and its various vistas and scenes. 3: Temples and Reclusive Dwellings where those needing inner refreshment and time for reflection could escape the profanities of city life, politics and commerce and stroll in an inspirational haven that provided both security and a refuge from the world. 4: Literary Gatherings and the Scholar’s Studio, which will commemorate famous gardens in painting and poetry and the pictorial methods employed by designers to convey their ideals of unadorned simplicity. 5: Denizens of the Garden, which will reveal the various fish, birds, and animals that typically inhabited imperial pleasure parks and private gardens. 6: A Floral Calendar of the Seasons depicting flowers and their symbolic associations and evoking the ephemeral nature of physical beauty.

The Chinese garden was not meant to just embrace nature but also to project an image of nature one that conformed to suit its purpose, providing a natural setting in which life, private or public would take place. Seats were placed so that visitors to a garden would be able to contemplate each rock and how it was placed. Trees and shrubs were often only evergreen but deliberately trained into unusual forms and shapes for their aesthetic appeal. Plants were not essential to the integrity of a Chinese garden. Rocks and water came first, followed by architecture, plants, trees and flowers. To the Chinese their accumulated symbolic and ritual associations were far more important than looks. The modest lotus represented a transformation, emerging as it does from the murky bottom of the pond to penetrate the surface of the water where it gradually reveals its face to the sun from which it draws strength and beauty.

A Chinese stroll garden unfolds along winding paths and even though there is a homogenous composition, isolated scenes confront the visitor as he strolls past elements that represent mountains, lakes creating mystery and surprise. There is a distinct link between the Chinese stroll garden and the eighteenth century English circuit walk garden one that English literary giant Horace Walpole described as an exquisite piece of landscape poetry. While it’s many vistas and surprise vignettes have elements from the Roman tradition, the ideas and philosophies may very well have come through China. We know that traders introduced the Romans to wearing silk during the first century and so it is not unreasonable to assume there were other influences as well.

Walking through a Chinese Garden, enjoying its visual delights on a day when the sun is shining is an empowering experience. A fondness for its quiet contemplative nature, its boundless panoramas and rich layered textures lingers long after you have left. It generates a warmth that will endure for a thousand springtimes. The Metropolitan Museum at New York

Admissions
Fee includes same-day admission to the Main Building and The Cloisters museum and gardens. There is no extra charge for entrance to exhibitions.