The Metropolitan Museum of Art New York uniquely captures cultural achievement, showcasing master art works as a reflection of human evolution antiquity – today.  Their exhibition China: Through the Looking Glass exploring the impact of Chinese aesthetics on Western fashion was extended three weeks to September 7 because it has been a huge success, surpassing the record-breaking Alexander McQueen: Savage Beauty (2011), to become The Costume Institute’s best attended exhibition ever. They are offering extended hours for their final weekend September 4 & 5. China: Through the Looking Glass. Bookings. 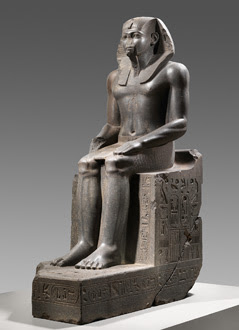 Ancient Egypt, always a focus for fascination, will be on view at The Tisch Galleries from October 12 with an exhibition that will focus on the Middle Kingdom (2030-1650) BC, when artistic, cultural, religious, and political traditions first conceived and instituted during the Old Kingdom were revived and reimagined. From monumental stone sculptures to delicate examples of jewelry, this is the first comprehensive presentation of Middle Kingdom art and culture and features many objects that have never been shown in the United States before. Ancient Egypt Transformed: The Middle Kingdom In direct contrast five centuries of aesthetic ingenuity and cultural interaction will be explored in a new exhibition Kongo: Power and Majesty, opening September 16 exploring the direct engagement between African and European leaders at the end of the fifteenth century through the early twentieth century. The focus is on revealing how and why the Kongo’s great sophistication and spectrum of artistic expression was a continuum, from the first incursions by Europeans along the coast through the colonial period. Education programs include Sunday at the Met, October 18 at 3:00 p.m when a panel will examine Kongo society’s history and artistic traditions over half a millennium. In and Out of the Studio: Photographic Portraits from West Africa presents some 80 photographic portraits taken between the 1870’s and 1970’s by amateur and professional photographers who were active from Senegal to Cameroon, from Mali to Gabon. Images possed against backdrops that were either inside and pianted, or outside in a natural setting, they had a huge impact on cultural perceptions, especially during the transition from a colonial power to an independent era. The Metropolitan Museum of Art has also announced that as from March 2016 they will be expanding their Modern and Contemporary Art Program revitalizing their iconic Marcel Breuer-Designed building.“The Met is proud to become the steward of this iconic building and to preserve Marcel Breuer’s bold vision,” said Thomas P. Campbell, Director and CEO of The Metropolitan Museum of Art… The wonderfully scaled galleries and interior spaces of The Met Breuer provide a range of opportunities to present our modern and contemporary program, in addition to our galleries in the Fifth Avenue building.”  If you are a local or visiting one of the world’s favouritie cities New York, New York check out the shows featuring at The Metropolitan Museum of Art