Famous steps of The Metropolitan Museum of Art New York, preserved for posterity

Opening their new re-designed ‘David H. Koch Plaza’ to meet along Fifth Avenue, The Metropolitan Museum of Art, one of the world’s major institutions has announced that it is now far better equipped to handle more than six million annual visitors.

This wonderful new place to be officially opened to the public on September 10, 2014, after two years of reconstruction.

It has an impressive design philosophy, one that both respects and complements the architectural highlights of the landmark classically inspired façade of The Met with its monumental, recently refurbished central stairs. They are the most iconic element of the prior design in what is a popular area for residents and visitors.

Dennis McGlade, Partner at OLIN, which served as the project’s lead design firm commented: “Designing a civic open space of such a scale, in the middle of Manhattan, in front of one of the premiere art institutions in the world—The Metropolitan Museum of Art—has been a great privilege and responsibility. OLIN are considered a preeminent landscape architecture firm in the United States, leading planners and architects forward in the art of placemaking.

It’s a massive outdoor space, and on a scale that takes up four city blocks, the entire length of the museum’s façade . Philanthropist David Koch on the steps of The Met, New York

“This project is a new public space of great importance, one that will benefit and delight … the entire community of New Yorkers and visitors to the City,” said Daniel Brodsky, the Museum’s Chairman. “We are immensely grateful to David Koch for his vision and generosity – in one philanthropic gesture, he made this transformative project possible.”

Contributing to the society in which we live has become an important and integral aspect of today’s corporate life, because it reflects our economic wellbeing, as well as the values we hold dear.

Currently the wealthiest resident of New York, American businessman, philanthropist, political activist, chemical engineer and Executive Vice President of Koch Industries, the second largest privately held company in the United States, Koch has shared the vision and supported it by ensuring it has been brought to fruition.

The new plaza offers a place for reflective public discourse; a place where people can talk together, debate topics important to society, or just meet and connect with others. Casual seating is provided for those waiting to meet and greet friends and family, as they arrive to see magnificent collections and exhibitions on show at The Met, as it is affectionately known.

The plaza is an open area, designed to be an environment that is peaceful and nurturing in the midst of a great city where lives can often be chaotic.

Trees and parasols have increased the square footage of shade reducing the surface temperature of the paving by as much as 25 degrees Fahrenheit. The plaza is sure to become a favourite meeting place in the shade and shelter of some 106 trees that have been planted, doubling the amount of trees previously on the plaza.

They are London Plane Trees and Little Leaf Linden trees, which will be treated in a fashion that highlights the rhythm and movement of the architecture. Embracing the ideas intrinsic in French landscaping techniques and horticultural practices, fountains, paving, lighting, allées and bosques made from clusters of trees that create an impressive space leading to The Met Museum’s entrances.

Additional benches will provide further options for seating, with shade provided by a series of cantilevered parasols. Parasols and trees in place, The Met NY plaza

The trees now in situ will eventually be pruned in the form of two aerial hedges, similar to trees at the Palais Royal in Paris that create a pleasant experience along the streetscape.

Hedging the trees will reinforce the central plaza’s architectural volume and ensures that the trees do not detract from the monumentality of the Museum’s classically inspired façade.

Within the central plaza, pairs of bosques of London Plane trees will flank the 81st and 83rd Street entrances. Planted on a square grid turned at a 45-degree angle to the street, the lines of the tree trunks are designed to guide pedestrians toward the doorways. The London Plane trees will be pollarded, a historical pruning technique, which allows for maximum sun penetration in winter to warm the plaza and maximum shade in the summer for cooling. Pollarding also limits the height of the trees so they will not grow to block the view of the imposing façade.

Along the base of the building on either side of the central stairway, ornamental beds of mixed shrubs and herbaceous flowers have been planted. They are referencing plantings present in early- to mid-20th-century photographs and drawings of the Museum. The plaza design is all about environmental sustainability.

As our world explodes with population the design attempts to ‘reconcile the physical need for a significant area of paved plaza with the desire to employ sustainable strategies regarding storm water management and the urban heat island effect, two goals that are often at odds with each other’

By using the latest suspended paving system and extensive subsurface tree pits they can now collect and utilize onsite storm water that would otherwise have drained into the City’s sewer system… the remainder directed into underground areas where it is held hold and slowly released without putting demand put on New York City’s aging system. 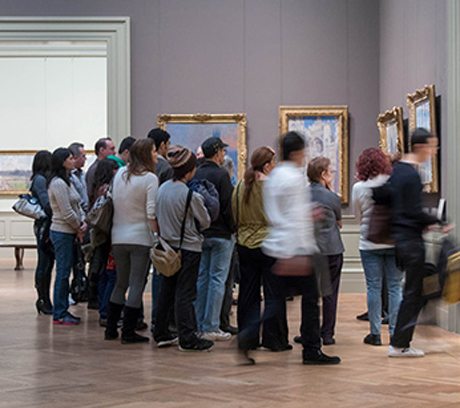 Inside The Met, where art and life meet

The Metropolitan Museum is one of those world institutions producing outstanding exhibitions, boosting public imagination, sparking inquiry and inspiring innovation.

They are contributing to important cultural conversations that will continue long after the exhibitions currently on offer end. They are helping to shape savvy citizens for our ever-evolving society, which today is an important aspect of the business of arts and truly creative nations.

The intrinsic benefits and artistic excellence of ‘art’ is often very hard to prove to either the public, or to the number crunchers measuring results in monetary terms. The creative force that drives our industry forward is bringing success while inspiring others to do the same.

The Met offers collections that span some 5,000 years, documenting our evolution from prehistory to the present and from every part of the world in which we live.

By placing an emphasis on public participation in its new plaza, The Met are also helping residents and visitors to begin the dialogue that develops a relationship with the imagery of world cultures when they proceed inside. The hierarchy of light designed by Hervé Descottes of L’Observatoire International, to illuminate the landscape, water features, grand stairs, and façade, will enhance the ambiance of the Museum plaza at night. The lights have been integrated into the Museum’s façade and the plaza itself, treating the building itself as a work of art by highlighting the sculptural nature of the façade.

They will enhance the shape and form of the building’s cornices, mouldings, decorative statues, and columns.

All the lights are highly energy-efficient, dimmable LEDs, providing superior control over the light levels of the new design elements.

What a wonderful space to enjoy on a warm summer night when the warmth of the façade’s light will contrast with the cool glow of the fountains and surrounding landscape. The design emphasizes the architectural components of the grand stairs and façade to create a new dimensionality to The Metropolitan Museum of Art, which is at the essence of the heartbeat of New York.

The Brandenburg Quartet is about to embark on its third and biggest national tour in April with concerts held in Sydney, Melbourne, Perth, Adelaide and Brisbane